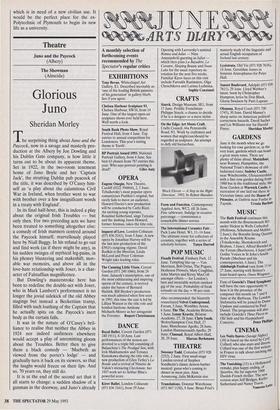 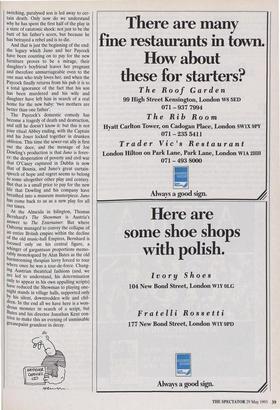 Juno and the Paycock (Albery) The Showman (Almeida)

The surprising thing about Juno and the Paycock, now in a savage and masterly pro- duction at the Albery by Joe Dowling and his Dublin Gate company, is how little it turns out to be about its apparent theme. Set in 1922, in the two-room tenement home of Juno Boyle and her 'Captain Jack', the strutting Dublin pub peacock of the title, it was described by O'Casey him- self as 'a play about the calamitous Civil War in Ireland, when brother went to war with brother over a few insignificant words in a treaty with England'.

In its final half-hour, this is indeed a play about the original Irish Troubles — but only then. For two preceding acts we have been treated to something altogether else: a comedy of Irish manners centred around the Paycock himself, marvellously played here by Niall Buggy. In his refusal to go out and find work (as if there might be any), in his sudden twinges of mythical leg-pains, in his phoney blustering and makeshift, mov- able war memoirs, and above all in the love-hate relationship with Joxer, is a char- acter of Falstaffian magnificence.

But Dowling's masterstroke here has been to redefine the double-act with Joxer, who in Mark Lambert's performance is no longer the jovial sidekick of the old Abbey stagings but instead a Beckettian tramp, filled with such loathing of the Captain that he actually spits on the Paycock's inert body as the curtain falls.

It was in the nature of O'Casey's bril- liance to realise that neither the Abbey in 1924 nor indeed audiences elsewhere would accept a play of unremitting gloom about the Troubles. Better then to give them a black comedy — 'Macbeth as viewed from the porter's lodge' — and gradually turn it back on its viewers, so that the laughs would freeze on their lips. And so, 70 years on, they still do.

It is at the end of the second act that it all starts to change: a sudden shadow of a gunman in the doorway, and Juno's already twitching, paralysed son is led away to cer- tain death. Only now do we understand why he has spent the first half of the play in a state of catatonic shock: not just to be the butt of his father's scorn, but because he has betrayed a rebel and is to die.

And that is just the beginning of the end: the legacy which Juno and her Paycock have been counting on to pay for the new furniture proves to be a mirage, their daughter's boyfriend leaves her pregnant and therefore unmarriageable even to the one man who truly loves her, and when the Paycock finally returns from his pub it is to a total ignorance of the fact that his son has been murdered and his wife and daughter have left him in search of a real home for the new baby: 'two mothers are better than one father'.

The Paycock's domestic comedy has become a tragedy of death and destruction, and still he doesn't know it: but this is not your ritual Abbey ending, with the Captain and his Joxer locked together in drunken oblivion. This time the sewer-rat ally is first out the door, and the message of Joe Dowling's production is that Juno is forev- er: the desperation of poverty and civil war that O'Casey captured in Dublin is now that of Bosnia, and Juno's great curtain- speech of hope and regret seems to belong to some altogether other play and century. But that is a small price to pay for the new life that Dowling and his company have breathed into a museum masterpiece. Juno has come back to us as a new play for all our times.

At the Almeida in Islington, Thomas Bernhard's The Showman is Austria's answer to The Entertainer: But where Osborne managed to convey the collapse of an entire British empire within the decline of the old music-hall Empires, Bernhard is focused only on his central figure, a whinger of gargantuan proportions memo- rably monologued by Alan Bates as the old barnstorming thespian luvvy forced to tour where once he was a tour-de-force. Chang- ing Austrian theatrical fashions (and, we are led to understand, his determination only to appear in his own appalling scripts) have reduced the Showman to playing one- night stands in village halls, supported only by his silent, downtrodden wife and chil- dren. In the end all we have here is a won- drous monster in search of a script, but Bates and his director Jonathan Kent con- trive to make this an evening of unmissable greasepaint grandeur in decay.