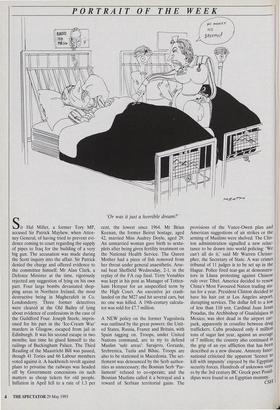 `Or was it just a horrible dream?' Sir Hal Miller, a former Tory MP, accused Sir Patrick Mayhew, when Attor- ney General, of having tried to prevent evi- dence coming to court regarding the supply of pipes to Iraq for the building of a very big gun. The accusation was made during the Scott inquiry into the affair. Sir Patrick denied the charge and offered evidence to the committee himself; Mr Alan Clark, a Defence Minister at the time, vigorously rejected any suggestion of lying on his own part. Four large bombs devastated shop- ping areas in Northern Ireland, the most destructive being in Magherafelt in Co. Londonderry. Three former detectives were cleared at the Old Bailey of lying about evidence of confessions in the case of the Guildford Four. Joseph Steele, impris- oned for his part in the 'Ice-Cream War' murders in Glasgow, escaped from jail in Edinburgh. It was his second escape in two months; last time he glued himself to the railings of Buckingham Palace. The Third Reading of the Maastricht Bill was passed, though 41 Tories and 66 Labour members voted against it. A backbench revolt against plans to privatise the railways was headed off by Government concessions on such matters as cheap tickets for old people. Inflation in April fell to a rate of 1.3 per cent, the lowest since 1964. Mr Brian Keenan, the former Beirut hostage, aged 42, married Miss Audrey Doyle, aged 29. An unmarried woman gave birth to sextu- plets after being given fertility treatment on the National Health Service. The Queen Mother had a piece of fish removed from her throat under general anaesthetic. Arse- nal beat Sheffield Wednesday, 2-1, in the replay of the FA cup final. Terry Venables was kept in his post as Manager of Totten- ham Hotspur for an unspecified term by the High Court. An executive jet crash- landed on the M27 and hit several cars, but no one was killed. A 19th-century calcula- tor was sold for £7.7 million.

A NEW policy on the former Yugoslavia was outlined by the great powers: the Unit- ed States, Russia, France and Britain, with Spain tagging on. Troops, under United Nations command, are to try to defend Muslim 'safe areas': Sarajevo, Gorazde, Srebrenica, Tuzla and Bihac. Troops are also to be stationed in Macedonia. The set- tlement was denounced by the Serb author- ities as unnecessary; the Bosnian Serb 'Par- liament' refused to co-operate; and the Bosnian Muslims called it a betrayal and a reward of Serbian territorial gains. The

provisions of the Vance-Owen plan and American suggestions of air strikes or the arming of Muslims were shelved. The Clin- ton administration signalled a new reluc- tance to be drawn into world policing: 'We can't all do it,' said Mr Warren Christo- pher, the Secretary of State. A war crimes tribunal of 11 judges is to be set up in the Hague. Police fired tear-gas at demonstra- tors in Lhasa protesting against Chinese rule over Tibet. America decided to renew China's Most Favoured Nation trading sta- tus for a year. President Clinton decided to have his hair cut at Los Angeles airport, disrupting services. The dollar fell to a low of less than 110 yen. Cardinal Juan Jesus Posadas, the Archbishop of Guadalajara in Mexico, was shot dead in the airport car- park, apparently in crossfire between drug traffickers. Cuba produced only 4 million tons of sugar last year, against an average of 7 million; the country also continued in the grip of an eye affliction that has been described as a new disease. Amnesty Inter- national criticised the apparent 'licence to kill with impunity' enjoyed by the Egyptian security forces. Hundreds of unknown vers- es by the 3rd century BC Greek poet Posid- dipus were found in an Egyptian mummy.