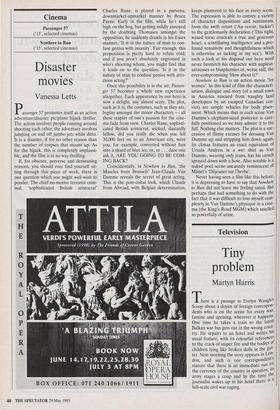 assenger 57 promotes itself as an action adventure/disaster pic/plane hijack thriller. The action involves people running around shooting each other; the adventure involves jumping on and off jumbo jets while ditto. It is a disaster, if for no other reason than the number of corpses that mount up. As for the hijack, this is completely implausi- ble, and the film is in no way thrilling.

If, for obscure, perverse and demeaning reasons, you should ever find yourself sit- ting through this piece of work, there is one question which you might well wish to ponder. The chief no-motive terrorist crim- inal, 'sophisticated British aristocrat' Charles Rane, is played in a parvenu, downmarket-upmarket manner by Bruce Payne. Early in the film, while he's still high on the hog, but getting mildly annoyed by the doubting Thomases amongst the opposition, he suddenly drawls in his Essex manner, 'It is in the nature of man to con- fuse genius with insanity'. Fair enough, this proposition is pretty hard to refute cold; and if you aren't absolutely engrossed in who's shooting whom, you might find that it leads on to the question: 'Is it in the nature of man to confuse genius with atro- cious acting?'

Once this possibility is in the air, Passen- ger 57 becomes a whole new experience altogether. Each appearance by our hero is now a delight, nay almost scary. The plot, such as it is, the costumes, such as they are, byplay amongst the minor characters — all these staples of one's passion for the cine- ma fade from view. Charles Rane, sophisti- cated British aristocrat, wicked, dastardly fellow, did you really die when you fell 30,000 feet on to an American city, were you, for example, converted without fuss into a shard of blue ice, or, or . . . dare one ask it, ARE YOU GOING TO BE COM- ING BACK?

Coincidentally, in Nowhere to Run, 'the Muscles from Brussels' Jean-Claude Van Damme reveals the secret of great acting. This is the post-coital look, which Claude from Abroad, with Belgian determination, keeps plastered to his face in every scene. The expression is able to convey a variety of character dispositions and sentiments, from the swift retort (`Au revoir, fucker') to the gentlemanly declaration (`This tight, waxed torso conceals a true and generous heart, a scintillating intelligence and a pro- found sensitivity and thoughtfulness which is otherwise so lacking in my sex'). With such a look at his disposal our hero need never besmirch his character with unpleas- antnesses or blasphemies or, worse still, the ever-compromising 'How about it?'

Nowhere to Run is an action movie 'for women'. In this kind of film the characteri- sation, dialogue and story (of a small town in America rescued from naughty land developers by an escaped Canadian con- vict) are simple vehicles for body place- ment Which means that in each scene Van Damme's elephant-sized posterior is care- fully positioned so we may admire it to the full. Nothing else matters. The plot is a suc- cession of flimsy excuses for dressing Van Damme up and stripping him down again. Its climax features an exact equivalent of Ursula Andress in a wet shirt as Van Damme, wearing only jeans, has his crotch sprayed down with a hose. Also notable is a naked pool scene uncannily reminiscent of Manet's `Dejeuner sur l'herbe'.

Never having seen a film like this before, it is depressing to have to say that Nowhere to Run did not leave me feeling sated. But perhaps that had something to do with the fact that it was difficult to lose myself com- pletely in Van Damme's physique in a cine- ma (the King's Road MGM) which smelled so powerfully of urine.