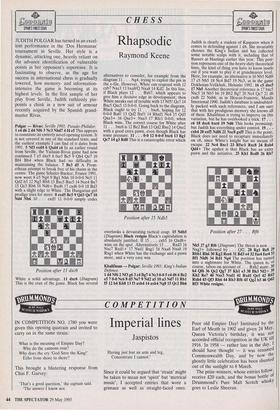 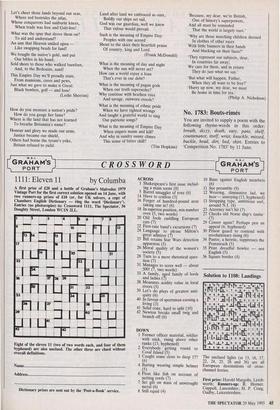 IN COMPETITION NO. 1780 you were given this opening quatrain and invited to carry on in the same strain:

What is the meaning of Empire Day? Why do the cannons roar?

Why does the cry 'God Save the King!' Echo from shore to shore?

This brought a blistering response from Chas F. Garvey: 'That's a good question,' the captain said. 'The answer I know not. Having just lost an arm and leg, Concentrate I cannot.'

Since it could be argued that 'strain' might be taken to mean not 'spirit' but 'metrical music', I accepted entries that wore a grimace as well as straight-faced ones.

Poor old Empire Day! Instituted by the Earl of Meath in 1902 and given 24 May, Queen Victoria's birthday, it was not accorded official recognition in the UK

1916. In 1958 — rather late in the day, I should have thought — it was renamed Commonwealth Day, and by now the ghostly little celebration has been shunted out of the sunlight to 8 March. The prize-winners, whose entries follow, receive £20 each, and the bonus bottle of Drummond's Pure Malt Scotch whisky goes to Leslie Sheeran.

Let's cheer those lands beyond our seas, Where red bestrides the atlas, Whose conquerors had sunburnt knees, When trade was free and Gatt-less!

What was the spur that drove them on? To aid and understand?

An aim that Heaven smiled upon Like swapping beads for land!

We bought the native's gold, and put Our bibles in his hand; Sold shoes to those who walked barefoot, And, to the Bedouins, sand!

This Empire Day we'll proudly state, From mansions, caves and pews, Just what we gave to make it Great: Black bowlers, golf — and loos!

(Leslie Sheeran) How do you measure a nation's pride? How do you gauge her fame?

Where is the land that has not learned To breathe Britannia's name?

Honour and glory we made our arms, Justice became our shield, Others had borne the tyrant's yoke, Britain refused to yield. Land after land we embraced as ours, Boldly our ships set sail, God was our guardian, well we knew That valour would prevail.

Such is the meaning of Empire Day: Peoples with one accord Shout to the skies their heartfelt praise Of country, king and Lord.

(Frank McDonald) What is the meaning of day and night When the sun will never set? How can a world repay a loan That's ever in our debt?

What is the meaning of pagan gods When our truth supersedes? Why continue with heathen rites And savage, outworn creeds?

What is the meaning of ethnic pride When we have righted wrongs And taught a grateful world to sing Our patriotic songs?

What is the meaning of Empire Day When snipers maim and kill?

And why in sundry sunny climes This sense of bitter chill? (Tim Hopkins) 'Because, my dear, we're British, One of history's superpowers, And all must be reminded That the world is largely ours.'

'Why are those marching children dressed In clothes of other races With little banners in their hands And blacking on their faces?'

'They represent our subjects, dear, In countries far away; We care for them, and in return They do just what we say.'

'But what will happen, Father, When they all want to be free?'

'Hurry up now, my dear, we must Be home in time for tea.'

You are invited to supply a poem with the following rhyme-words in this order: breath, dizzy, death, easy, pans, shelf, countenance, itself, wrist, knuckle, missed, buckle, head, dirt, bed, shirt. Entries to 'Competition No. 1783' by 11 June.