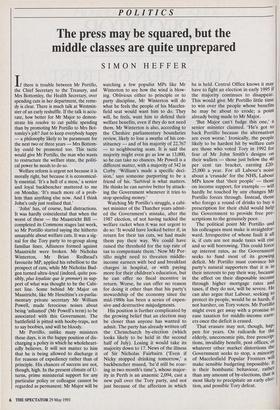 The press may be squared, but the middle classes are quite unprepared

Welfare reform is urgent not because it is morally right, but because it is economical- ly essential. 'It's a hell of a mess,' a senior and loyal backbencher muttered to me on Monday. 'It's much more of a prob- lem than anything else now. And I think John's only just realised that.'

`John' has, of course, had distractions. It was hardly coincidental that when the worst of these — the Maastricht Bill completed its Commons stages last week, so Mr Portillo started saying the hitherto unsayable about welfare cuts. It was a sig- nal for the Tory party to re-group along familiar lines. Alliances formed against Maastricht were broken. Mr Nicholas Winterton, Mr Brian Redhead's favourite MP, applied his rebellion to the prospect of cuts, while Mr Nicholas Bud- gen turned ultra–loyal (indeed, quite pos- sibly, plus loyaliste que le premier) in sup- port of what was thought to be the Cabi- net line. Some behind Mr Major on Maastricht, like Mr Heseltine's ex-parlia- mentary private secretary Mr William Powell, made ferocious noises about being 'ashamed' (Mr Powell's term) to be associated with this Government. The battlefield is pitted with booby-traps, not to say boobies, and will be bloody.

Mr Portillo, unlike many ministers these days, is in the happy position of dis- charging a policy in which he wholeheart- edly believes. It will not matter to him that he is being allowed to discharge it for reasons of expediency rather than of principle. His chances of success are not, though, high. In the present climate of U- turns, prime ministerial support for any particular policy or colleague cannot be regarded as permanent. Mr Major will be watching a few populist MPs like Mr Winterton to see how the wind is blow- ing. Oblivious either to principle or to party discipline, Mr Winterton will do what he feels the people of his Maccles- field seat would want him to do. They will, he feels, want him to defend their welfare benefits, even if they do not need them. Mr Winterton is also, according to the Cheshire parliamentary boundaries review, likely to lose a swathe of his con- stituency — and of his majority of 22,767 — to neighbouring seats. It is said the majority might even go as low as 13,000, so he can take no chances. Mr Powell is a different matter, with a majority of 342 in Corby. 'William's made a specific deci- sion,' says someone purporting to be a friend of his. `Survival is what matters. He thinks he can survive better by attack- ing the Government whenever it tries to stop spending money.'

Watching Mr Portillo's struggle, a cabi- net minister of the Thatcher years admit- ed the Government's mistake, after the 1987 election, of not having tackled the welfare racket when it was not urgent to do so: 'It would have looked better if, in return for their tax cuts, we had made them pay their way. We could have raised the threshold for the top rate of tax to compensate them.' Now Mr Por- tillo might need to threaten middle- income earners with bed and breakfast charges in hospital, or with paying more for their children's education, but he can offer no fiscal incentive in return. Worse, he can offer no reason for doing it other than that his party's stewardship of the economy since the mid-1980s has been a series of expen- sive and destructive misjudgments.

His position is further complicated by the growing belief that an election may be closer than anyone has wanted to admit. The party has already written off the Christchurch by-election (which looks likely to be held in the second half of July). Losing it would take its majority down to 17. News of the illness of Sir Nicholas Fairbairn (`Even if Nicky stopped drinking tomorrow,' a backbencher mused, 'he'd still be roar- ing in two month's time'), whose major- ity in Perth is an anaemic 2,094, cast a new pall over the Tory party, and not just because of the affection in which he is held. Central Office knows it may have to fight an election in early 1995 if the majority continues to disappear. This would give Mr Portillo little time to win over the people whose benefits he may be about to erode; a point already being made to Mr Major.

`But Major can't fudge this one,' a senior minister claimed. 'He's got to back Portillo because the alternatives are even worse.' Ironically, the people likely to be hardest hit by welfare cuts are those who voted Tory in 1992 for fear of Mr John Smith's designs on their wallets — those just below the 40 per cent tax bracket, earning £20- 25,000 a year. For all Labour's noise about a 'crusade' for the NHS, Labour MPs know that 'their people' — those on income support, for example — will hardly be touched by any changes Mr Portillo forces through. Instead, those who forego a round of drinks to buy a prescription for their child would help the Government to provide free pre- scriptions to the genuinely poor. The political point Mr Portillo and his colleagues must make is straightfor- ward. Irrespective of whose fault it all is, if cuts are not made taxes will rise and so will borrowing. This could force up interest rates, as the Government seeks to fund most of its growing deficit. Mr Portillo must convince his party's natural supporters that it is in their interests to pay their way, because the effect on their disposable income through higher mortgage rates and taxes, if they do not, will be severe. He can also argue that Labour, seeking to protect its people, would be as harsh, if not harsher, on Tory voters. Mr Portillo might even get away with a promise to ease taxation for middle-income earn- ers once the deficit is erased.

That erasure may not, though, hap• pen for years. On railcards for the elderly, uneconomic pits, free prescrip- tions, invalidity benefit, post offices, of whatever other market distortions the Government seeks to stop, a minoritY of Macclesfield Popular Fronters will make sensible budgeting impossible. It is their bombastic behaviour, rather than any amount of by-elections, that is most likely to precipitate an early elec- tion, and possible Tory defeat.