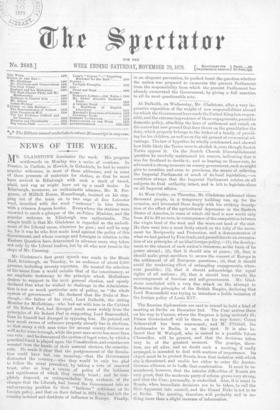 people, in a temporary building run up for the occasion, and interested them deeply with his striking descrip- tion of the effect of the agricultural depression in the Eastern States of America, in some of which old land is now worth only from e4 to £8 an acre, in consequence of the competition between the virgin land of the west and the worn-out land of the east. He then went into a most lively attack on the folly of the move- ment for Reciprocity and Protection, and a demonstration of what we had gained by Free-trade, and passed then to an enumera- tion of six principles of an ideal foreign policy,—(1), the develop- ment to the utmost of each nation's resources, as the basis of its power abroad ; (2), that it should aim at peace; (3), that it should make great sacrifices to secure the concert of Europe in the settlement of all European questions ; (4), that it should avoid the weakening effect of entangling engagements, when- ever possible ; (5), that it should acknowledge the equal rights of all nations ; (6), that it should lean towards the encouragement of freedom and self-government. Mr. Glad- stone concluded with a very fine attack on the attempt to Romanise the principles of the British Empire, declaring that Lord Beaconsfield was trying to introduce a feeble imitation of the foreign policy of Louis XIV.