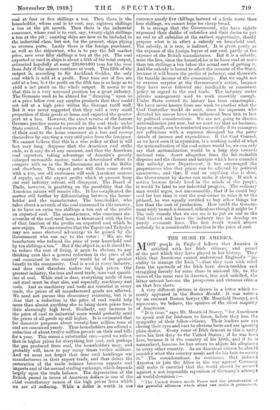 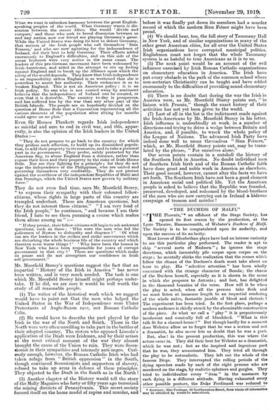 THE IRISH IN AMERICA.

MOST people in Englai cl believe that America is • satisfied with her Irish citizens, and proud of the part which they have played in her history. They think that Americans cannot understand England's " in- ability to manage the Irish "—that they turn with relief from the spectacle of the Irish here, down-trodden and struggling fiercely for some share in national life," to the vision of the same race in America, free and satisfied, the bitter outcast become the prosperous and virtuous chime on that free shore.

A very different picture is drawn in a letter which re- cently appeared in the Boston Herald. It was written by an eminent Boston lawyer (Mr. Moorfield Storey), and represents, we believe, the opinion of the silent majority of Americans.

" It is time," says Mr. Moorfield Storey, " for Americans to speak and for Irishmen to listen, before they lose the sympathy of their fellow-citizens. Their leaders now are closing their eyes and ears to obvious facts and are ignoring plain duties. Every voter of Irish descent in this c, witty owes his first duty to the United States ; if he was born here, because it is the country of his birth, and if he is naturalized, because he has sworn to abjure his allegiance to every other country. As an American citizen he should consider what this country needs and do his best to secure it." The considerations, he continues, that induced America to join the Allies in the war against Germany still make it essential that the world should be secured against a not. impossible repetition of Germany's attempt at world-dominion :— " Tho United States needs Peace and the preservation of the powerful alliances which alone can make it permanent.

What we want is unbroken harmony between the great English- speaking peoples of the world. What Germany wants is dis- sension between the recent Allies. She would ` divide and conquer,' and those who seek to breed dissension between us and any nation now our friend are playing Germany's game. While the United States was doing its best to defeat Germany, that section of the Irish people who call themselves Sinn Feiners,' and who are now agitating for the independence of Ireland, did their best to help Germany. Their efforts added enormously to England's difficulties, and on this side of the ocean Irishmen were very active in the same cause. The leaders of this pro-German movement have been welcomed by Irish-Americans, and aided in the attempt to stir up feeling against England and to break up the Alliance upon which the safety of the world depends. They know that Irish independence is an impossibility unless England is so weakened that she is powerless to assert her authority. Their endeavour is so to weaken England. This is not an American policy : it is an Irish policy. No one who is not carried away by sentiment believes that the independence of Ireland can be secured, or even that it is desirable. The country to-day is prosperous, and has suffered less by the war than any other part of the British Islands. The people are so hopelessly divided on the question of Home Rule that a Convention representing all the various elements of the population after sitting for months could agree on no plan."

Even Sir Horace Plunkett regards Irish independence as suicidal and sure to end in civil war, and this, appar- ently, is also the opinion of the Irish leaders in the United. States :— " They do not propose to go back to the country for which they profess such affection, to -build up its diminished popula- tion, to add their property to its resources, and to take a personal part in its government. They prefer, safely protected by the American flag, to abuse England from a distance, rather than expose their lives and their property to the risks of Irish Homo Rule. Nor are they fighting for a principle ; for they do not urge the independence of the Philippines, who are united and governing themselves very creditably. They do not protest against the overthrow of the independent Republics of Haiti and San Domingo, which the United States now govern by military force."

They do not even find time, says Mr. Moorfield Storey, " to express their sympathy with their coloured fellow- citizens, whose rights in large parts of this country are trampled underfoot. These are American questions, but they do not interest these citizens." " I am very fond of the Irish people," he continues, " and because I am their friend, I hate to see them pursuing a course which makes them aliens among us " :— " If they persist, their fellow-citizens will begin to ask awkward questions, such as these : ' Who were the men who led the policemen of Boston to disloyalty and disgrace ? " Of what use are the leaders in the strikes and strike movements which are disturbing the whole business life of the country and which threaten even worse things ? " Who have been the bosses in New York who have been responsible for years of corrupt government in that city ' These are questions which make us pause and do not strengthen our confidence in Irish self-government."

Mr. Moorfield Storey's questions suggest the fact that an impartial " History of the Irish in America " has never been written, and is very much needed. The task is one which Mr. Moorfield Storey himself might perhaps under- take. If he did, we are sure it would be well worth the study of all reasonable people.

(1) The writer of the historical work which we suggest would have to point out that the men who helped the United States in the War of Independence were Ulster Protestants of Anglo-Saxon race, not Roman Catholic Celts.

(2) He would have to describe the part played by the Trish in the war of the North and South. Those in the North were very often unwilling to take part in the battles of their adopted country. The rioters who opposed Lincoln's application of the Draft were Irishmen, and by their action at the most critical moment of the war they almost brought the cause of the Union to ruin. They were Seces- sionist in their sympathies and intensely anti-negro. Curi- ously enough, however, the Roman Catholic Irish who had taken refuge from " British oppression " in the South, though convinced Secessionists and supporters of slavery, refused to take up arms in defence of these principles. They objected to the Draft in the South as in the North !

(3) Another chapter of the History would tell the story of the Molly Maguires who forty or fifty years ago terrorized the mining districts of Pennsylvania. This secret society formed itself on the home model of rapine and murder, and before it was finally put down its members had a murder record of which the modern Sinn Feiner might have been proud.

(4) We should hear, too, the full story of Tammany Hall in New York, and of similar organizations in many of the other great American cities, for all over the United States Irish organizations have corrupted municipal politics. Englishmen must not forget that the whole Tammany system is as hateful to true Americans as it is to us.

(5) The next point would be an account of the evil influence exercised by Irish Roman Catholic organizations on elementary education in America. The Irish have put every obstacle in the path of the common school where non-sectarian Christianity can be taught and have added enormously to the difficulties of providing sound elementary education.

(6) There is no doubt that during the war the Irish in America were, as Mr. Moorfield Storey points out, " in liaison with Prussia," though the exact history of their activities has not yet been given to the world.

(7) Last of all in the list is the indictment made against the Irish-Americans by Mr. Moorfield Storey in his letter. Irish influence is undoubtedly at work, in a number of directions and trying to drive a wedge between Britain and America, and, if possible, to wreck the whole policy of the League of Nations. The advanced Irish Party have indeed done well to name themselves " Sinn Feiners," which, as Mr. Moorfield Storey points out, may be trans- lated by the phrase, " For ourselves alone." Our seven points contain in a nutshell the history of the Southern Irish in America. No doubt individual men of Southern Irish birth and of the Roman Catholic faith have done great and noble work in America as elsewhere. Their good record, however, cannot alter the facts we have set forth. The Southern Irish have not been a good element in American social and political life. Yet the American people is asked to believe that the Republic was founded, preserved, developed, and redeemed by the blood-brothers of the men who are now carrying out in Ireland a hideous campaign of treason and murder !