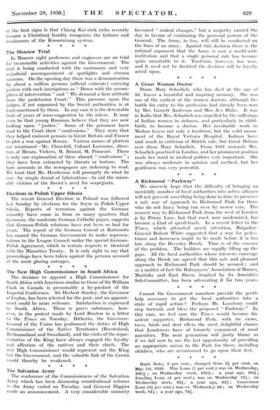 A Great Woman Doctor Dame Mary Scharlieb, who has died

at the age of 85, leaves a beautiful and inspiring memory. She was one of the earliest of the women doctors, although the battle for entry to the profession had already been won by Mrs. Garrett Anderson and Miss Jex Blake. It was in India that Mrs. Scharlieb was impelled by the suffering; of Indian women in sickness, and particularly in child- birth, to become a doctor. Her invaluable work in Madras leaves not only a tradition, but the solid monu- ment of the Royal Victoria Hospital. Indians have said much in criticism of British rule, but Great Britain sent them Mary Scharlieb. From 1887 onwards Mrs. Scharlieb practised in London, and her prominent position made her word in medical politics very important. She was always moderate in opinion and method, but her gentleness was very powerful.