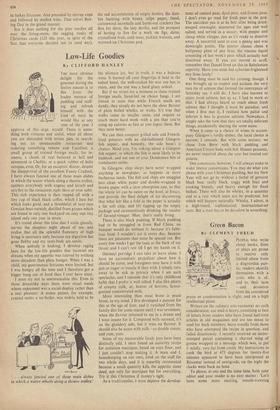 _ time of the year. I approve of this urge, myself. There is some- thing both virtuous and sinful, when all about you are distended with mince pies, in search- ing out an unseasonable restaurant and ordering something remote and Lucullan; a small group of trained foreign snails, for in- stance, a chunk of veal battered to hell and simmered in Chablis; or a quick rubber of baby octopus, even. Or, for an escapists' dinner, despite the disapproval of the excellent Fanny Cradock, I have always fancied one of those main dishes in which the waiter wheels along a theatre trolley, spatters everybody with cognac and kirsch and sets fire to the restaurant right there at your table. This rich experience is then topped off with a tiny cup of black black coffee, which I hate but which looks good, and a thimbleful of very rare Grecian boat-varnish, distilled from grapes which are found in only one backyard on only one tiny. island only one year in seven.

It's round about this time that 1 smile glassily, survey the sleepless night ahead of me, and realise that all the splendid flummery of high living is necessary only because my digestion has gone flabby and my taste-buds are senile.

When nobody is looking, I develop raging lusts for the low-life goodies that haunted my dreams when my appetite was tutored by nothing. more decadent than plain hunger. When 1 was a child, my gastronomic horizons were limited, but I was hungry all the time and I therefore got a bigger bang out of food than I ever have since.

I must try not to sentimentalise this Even in those dreamlike days there were ritual meals whose enjoyment was a social display rather than a real pleasure. A stolen potato, for example, roasted under a tar-boiler, was widely held to be

. . always fancied one of those main dishes in which a waiter wheels along a theatre trolley.'

the ultimate joy, but in truth, it was a hideous mess. It burned off your fingertips if held in the naked hand, the well-cooked bit was too hot to enjoy, and the rest was a hard gluey ordeal.

But if we revert for a moment to those trained foreign snails, hand-fed on choice fungi, I am forced to state that while French snails are dandy, they simply do not have the sheer flavour of plain boiled whelks, or wulks. It's true that wulks come in smaller units, and require so much more hard work with a pin that you're using up calories as fast as you ingest them. But they taste better.

We can then compare grilled, sole and French- fried potatoes with an old-fashioned Glasgow fish supper, and honestly, the sole hasn't a chance. Mind you, I'm talking about a Glasgow fish supper, in which the fish is most likely to be haddock, and not one of your Dundonian bits of translucent saithe.

In Glasgow, chip shops have never wrapped anything in newspaper, as happens in more barbarous lands. The fish and chips are snuggled into clean white , paper and double-wrapped in brown paper with a slow absorption rate, so that the whole lot can be eaten on the hoof, al fresco, and provide the final delight of (a) discovering that what felt like a fold in the paper is actually a fat soft chip, and (b) tipping up the empty package and ceremoniously drinking the residue of fat-and-vinegar. Man, that's really living.

There is also black pudding. If black pudding had to be smuggled in from Red China, no banquet would do without it; because it's fabu- lous food. 1 wouldn't eat it every day,, because there are pleasures that must be spaced out. But every few weeks 1 get the taste at the back of my throat and I can't rest till I get my hands on it.

Oatmeal porridge I can take or leave alone. I have no nationalistic prejudices about how it should be eaten, and foreigners may have it with jam or sugar or treacle if they wish. I simply turn away to be sick in privacy when I see such spectacles, and 1 concede that it's only childhood habit that I prefer it well salted. I also like plenty of creamy milk, or, horror of horrors, homo- genised concentrated milk.

More interesting than meal brose is pease brose, to my mind. I first developed a passion for this at the age of four, and it vanished from the family diet for some reason until I was seventeen, when the flavour returned to me in a dream atm! I went insane for it. Compared with oatmeal, it's on the gluddery side, but it wins on flavour. It should also be eaten with milk—or double cream, and yum, yum.

Some of my memorable foody joys have been distinctly odd. I once found an austerity recipe for imitation marzipan, based on soya flour, and I just couldn't stop making it. A mate and I, housekeeping on our own, lived on the stuff for two whole days, and it is superbly economical because a small quantity kills the appetite stone dead, not only for marzipan but for everything. Try it this Christmas if money's tight.

As a traditionalist, I must deplore the develop- ment of canned peas, dyed peas, and frozen peas. I don't even go mad for fresh peas in the pod. The succulent pea is at its best after being dried; steeped overnight; simmered for ages and well salted; and served in a saucer, with pepper and cheap white vinegar, just as it's ready to dissolve away. A saucerful used to cost a penny and was downright poetic. The poorer classes chose a halfpenny plate of pea brae, the viscous liquid consisting of last week's peas which actually had dissolved away. If you are moved to scoff, remember that Daniel lived on this in Babylonian captivity. Have you steak-fed sybarites frightened any lions lately'?

One thing must be said for canning, though. I was brought up to respect and acclaim the very rare tin of salmon that formed the centrepiece of Saturday tea. I still do. I have also learned to enjoy fresh salmon, but ay ay, 1 had to work at' that. I had always heard so much about fresh salmon that I thought it must be paradise, and when 1 first met it,, 1 realised how pallid and inferior it was to genuine salmon. Nowadays, simply take the view that they are totally different things, accidentally sharing the same name.

When it came to a choice of wines to accom- pany Glasgow's lordly dishes, the local choice is narrow, I concede. But with some instinct, we chose Iron Brew' with black pudding and American Cream Soda with fish. Honest peasants, we never inquired about the year but trusted our palates.

One concession, however, I will always make to wider festive conventions. You may do what you please with your Christmas pudding, but my New Year will not go by without a fistful of genuine black bun; really black, soggy with fruit and cooking brandy, and heavy enough for fixed ballast. There will also be whisky, in a quantity and at a rate which must not be predicted, but which will happen naturally. Whisky, I admit, is a high-toned, sophisticated, international-set taste. But a man has to be decadent in something.