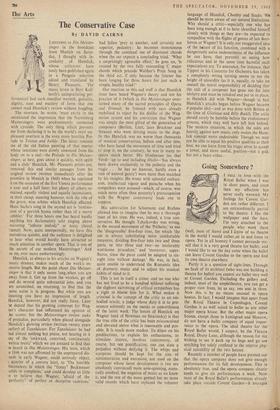 By DAVID CAIRNS The overture, he wrote, 'must excite in the uninitiated the impression that the Nuremberg Mastersingers were predominantly connected with cyanide. The only thing which prevents me from declaring it to be the world's most un- pleasant overture is the even more horrible Pre- lude to Tristan and lsolde. The latter reminds me of the old Italian painting of that martyr whose intestines were slowly unwound from his body on to a reel—the Prelude to Die Meister- singer, at best, goes about it quickly, with spirit and a club.' Hanslick, Mr. Pleasants points out, removed this and similar passages from his original review (written immediately after the premiere in Munich in 1868) when he reprinted it on the occasion of the first Vienna performance a year and a half later; but plenty of others re- mained, equally violent and equally inconsistent, in their cheap, sneering humour, with the role of the grave, wise arbiter which Hanslick affected. Hans Sachs's song in the second act is 'reminis- cent of a peevish hyena rather than of a merry cobbler.' For three hours one has heard hardly anything but declamatory solo singing above wavering "infinite melody" or noisy choral tumult. Now, quite unexpectedly, we have this melodious quintet, and the audience is delighted to hear what would hardly have attracted so much attention in another opera. That is one of the secrets of our modern Mastersinger.' And so on, ever more embarrassingly.

Hanslick, as always in his articles on Wagner's music dramas, makes much of the work's ex- cessive length. But the point about Die Meister- singer is that'it only seems long.when you are away from it. Get up from the wireless, go off and do several quite substantial jobs, and you are astonished, on returning, to find that the same scene is in progress. But while you are listening you have no impression of length. Hanslick, however, did not really listen. Later he denied that his growing contempt for Wag- ner's character had influenced his opinion of le scores; but the Meistersinger review reeks of prejudice, particularly when placed alongside Hanslick's glowing review (written twenty years earlier) of Tannhduser. For Tannhduser he had tad almost nothing but praise, not hearing in it my of the 'awkward, contrived, continuously 'estless music' which we are amazed to find that e heard in Die Meistersinger. His taste, which n 1846 was not affronted by the unprepared dis- .ords in early Wagner, could seriously object, I quarter of a century later, to 'The horrible lissonances in which the "funny" Beckrnesser colds or complains,' and could develop so little is to believe that Wagner, 'afraid of the 'profanity" of perfect or deceptive cadences,' had fallen 'prey to another, and certainly not superior, pedantry: he becomes monotonous through the continual use of dissonant chords when the ear expects a concluding triad.' What a surprisingly agreeable effect,' he goes on, 'is created by the two fully resounding C major chords which precede Walther's Prize Song in the third act, if only because the listener has been longing for three hours for just such a simple, healthy triad!'

Our reaction to this sad stuff is that Hanslick must have heard Wagner's theory and not his practice of it (which in Die Meistersinger over- turned many of the sacred principles of Opera and Drama); he listened with ears already mobilised to reject by his dislike of the Wag- nerian system and his conviction that Wagner was simply the most gifted of the generation of composers (Berlioz, Liszt, later Bruckner and Strauss) who were driving music to the dogs. In this Hanslick was no worse ,than thousands of musical conservatives, before and after him, who have hated the movement of time and tried to stop it; on the contrary, he was in many re- spects much better. His blindnesses (as that Verdi—up to and including Otello—'has always been drawn exclusively to the pathetic and the tragic . . . he has no humour, hardly even a vein of natural gaiety') were mere than matched by his insights. He wrote with splendid enthusi- asm, intellectual vigour and panache when his sympathies were aroused—which, of course, was much more often than posterity's preoccupation with the Wagner controversy leads one to suppose.

His admiration for Schumann and Brahms allowed him to imagine that he was a thorough man of his time. He was, indeed, a true con- servative. He thought Tchaikovsky was wrong, in the second movement of the 'Pathetic,' to use the 'disagreeable' five-four time, for which 'the ear is always substituting more comfortable measures, dividing five-four into two and three parts, or into three and two—an intolerably worrisome procedure,' and 'moreover, super- fluous, since the piece could be adapted to six- eight time without damage.' He was, in fact, quite unable to understand the Romantic idea of dramatic music and to adjust his musical habits of mind to it.

This is not in itself a crime; and no one who has not lived to be a hundred without suffering the slightest narrowing of critical sympathies has a right to blame him for it. What makes it criminal is the concept of the critic as an em- bodied oracle, a judge whose duty- it is to pro- nounce solemnly on the merits or unworthiness of the latest work. The lesson of Hanslick on Wagner (and of Newman on Stravinsky) is that the true role of the critic has been misconceived and elevated abbve what is reasonable and pos- sible. It is much more modest. To dilate on his predilections, to explain his enthusiasms, to stimulate interest, involves controversy, of course, but not pontification; one can state a prejudice without deifying it. The whips and scorpions should be kept for the sins of administration and execution, not used on the composer whose latest development • is (we are absolutely convinced) mere note-spinning, essen- tially cerebral, the negation of music as we know it, and the rest of the more genteel but no more valid sounds which have replaced the robuster

language of Hanslick, Chorley and Scudo. We should be more aware of our natural limitations. Why should a critic—especially one who has been long enough at it to have identified himself closely with things as they are—be expected to sympathise with the flights of genius of late Beet- hoven or Wagner? It is only our exaggerated idea of the nature of his function, combined with a dangerously naive underestimate of the influence he can have, that prevents us seeing how ridiculous and at the same time harmful such expectations are. To announce, for instance, that Tippett in his Concerto for Orchestra has taken a completely wrong turning seems to me the height of absurdity (as it is, equally, to take on oneself the moral responsibility of deciding that the cult of a composer has gone too far into idolatry and must be rebuked and put in its place, as Hanslick did with Wagner—though in fact Hanslick's attacks began before Wagner became a'popular idol—and as was done with Britten at the time of Gloriana and Billy Budd). The critic should surely be humble before the evolutionary process, which may well have left him behind. The modern situation, in which the odds are heavily against new music, only makes the Hans- lick concept more undesirable. Though we may not be able to equal his positive qualities at their best, we can learn from his tragic error, to accept a lower, and more useful, Position—not a god, but not a beast either.