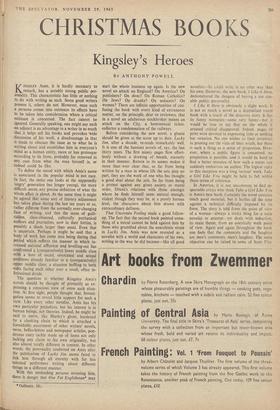 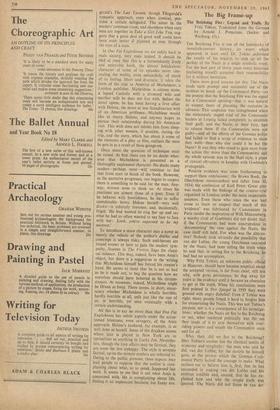 Kingsley's Heroes BY ANTHONY POWELL KINGSLEY AMTS, it is hardly necessary to remark, has a notably strong public per- sonality. This characteristic has little or nothing to do with writing as such. Some good writers possess it, others do not. However, once such a persona comes into existence its effects have to be taken into consideration where a critical estimate is concerned. The fact cannot be ignored. Generally speaking, one might say such an adjunct is an advantage to a writer in so much that it helps sell his books and provokes 'wide discussion of his work, a disadvantage in that it tends to obscure the issue as to what he is writing about and establishes him in everyone's mind as a human entity, more or less grotesque according to its form, probably far removed in any case from what the man himself is, or indeed could be like.

To define the mood with which Amis's name is associated in the popular .mind is not easy. In fact, the more one looks at the supposedly 'angry' generation (no longer young), the more difficult seems any precise definition of what the whole affair is about. At the same time it might be agreed that some sort of literary adjustment has taken place during the last ten years or so, rather different from the normally ever-changing face of writing, and that the seam of guilt- ridden, class-obsessed, culturally puritanical authors and journalists, now in their forties, is possibly a shade larger than usual. Even that is uncertain. Perhaps it might be said that a body of work has come into being during that period which reflects the manner in which in- creased national affluence and levelling-out has confronted a (comparatively) lower middle class with a host of social, emotional and sexual problems already familiar to a (comparatively) upper middle class; a situation baffling to both sides facing each other over a small, often in- finitesimal divide.

The question is whether Kingsley Amis's novels should be thought of primarily as ex- pressing a conscious view of some such situa- tion. At first sight, people thought that. Investi- gation seems to reveal little support for such a view. Like every other novelist, Amis has his own particular prejudices, but his interest is in human beings, not theories. Indeed, he might be said to move, like Marley's ghost, burdened by a clanking chain to which is attached a formidable assortment of other writers' novels, verse, belles-lettres and newspaper articles, pon- derous rusty tackle made up of items not only lacking any claim to ibis own originality, but also almost totally different in content. In other words, the personality conferred on Amis after the publication of Lucky Jim seems fated to link him through all eternity with far less talented performers writing about different things in a different manner.

With this misleading persona investing him, there is danger that One Fat Englishman* may * Gollancz, I8s. start the whole business up again. Is the new novel an attack on England? On America? On publishers? On dons? On Roman Catholics? On Jews? On drunks? On seducers? On women? There are infinite opportunities of con- fusing the book with every kind of extraneous matter, on the principle, dear to reviewers, that in a novel an adulterous stockbroker means an attack on the City, a homosexual ticket- collector a condemnation of the railways.

Before considering the new novel, a glance should be given at the score up to date. Lucky Jim, after a decade, re-reads remarkably well. It is one of the funniest novels of, say, the last thirty years. The first ninety pages flow effort- lessly without a drawing of breath, masterly in their manner. Return to its scenes makes it more than ever clear that, so far from being written by a man in whose life the arts play no part, they are the work of one who has thought a good deal about the arts. So far from being a protest against any given society or moral order, Dixon's relations with those amongst whom he finds himself seem natural enough, violent though they may be, at a purely human level, the characters about him drawn with extraordinary deftness.

That Uncertain Feeling made a good follow- up. The fact that the second book pointed some- thing of a moral cannot be held against him by those who grumbled about the anarchistic strain in Lucky Jim. Amis was now revealed as a novelist with a world and characters of his own, writing in the way he did because—like all good novelists—he could write in no other way than his own. However, the next book, 1 Like 11 Here, dethonstrated the dangers of having a too size- able public personality.

1 Like It Here is obviously a slight work. It is not so much a novel as a dramatised travel book with a touch of the detective story. It has its funny moments—some very funny—but it would be true to say that on the whole it aroused critical disapproval. Indeed, pages of print were devoted to expressing little or nothing but vexation. No one wishes to limit reviewers in pouring out the vials of their wrath, but there is such a thing as a sense of proportion. How- ever, where a public figure is concerned, no proportion is possible. and it would be hard to find a better instance of how such a status can suddenly embarrass an author. The logical reply to this reception was a long 'serious' work. Take a Girl Like You might be held to fall within those terms of reference.

In America, it is not uncommon to find re- spectable critics who think Take a Girl Like You is Amis's best book. Certainly the novel contains much good material, but it battles all the time against a technical difficulty imposed by its form. The story is told from the point of view of a woman—always a tricky thing for a male novelist to attempt—yet deals with seduction, its main theme, from an essentially male point of view. Again and again throughout the book one feels that the comments and the laughter are men's comments, men's laughter. The same objection can be raised to some of Scott Fitz-

gerald's The Last Tycoon, though Fitzgerald's romantic approach, even when ironical, pro- vides a certain safeguard. The scene in the masters' common-room, and elsewhere when only men are together in Take a Girl Like You, sug- gests that a great deal of good stuff could have been even better if planned as seen through the eyes of a man.

In One Fat Englishman we are safely back in male society, very male indeed. It should be said at once that this is a tremendously lively and enjoyable book, the almost knockabout character of some of its episodes never con- cealing the reality, even melancholy, of much of its feeling. Short and dramatic, it takes the form of the visit to America of Micheldene, a London publisher. Micheldene is sixteen stone. a lapsed Catholic with a divorced wife and - another wife he does not live with. Before the novel opens, he has been having a love affair with Helene, the more or less Scandinavian wife of an American professor. Micheldene would like to marry Helene, and anyway hopes to pursue their relationship during his American visit. This wish does not inhibit him from sleep- ing with other women, if possible, during the trip, and the story, which has about it some of the elements of a play or film, outlines the mess he gets in as a result of these goings-on.

Once more the question of technique must be raised. At first there can be no doubt what- ever that Micheldene is presented as a thoroughly unpleasant character. No doubt many readers—perhaps most—will continue to feel that from start to finish of the book. However, as the narrative progresses, one begins to suspect there is something to be said for the man. Any- way, women seem to think so. At times his reactions are almost those of a poet. Even if he behaves with boorishness, he has to suffer unendurable bores. Helene herself—very well drawn—is infinitely tiresome, and, incidentally, frigid. `He had wanted to ring her up and say -what he had so often wanted to say face to face with her: Look, you're supposed to be my mistress.'

To introduce a main character into a novel as merely the vehicle of the author's dislike and contempt is always risky. Such anti-heroes are bound sooner or later to gain the readers' sym- pathy, Soames in The Forsyte Saga the classi- cal instance. This may, indeed, have been Amis's object, but there is a suggestion in the writing that Micheldene himself has forced his creator's hand. He seems to insist that he is not as bad as he is made out, to beg the queition how we ourselves should have behaved in his circum- stances. At moments, indeed, Micheldene might be Dixon at forty. There seems, in short, uncer- tainty whether Micheldene is wholly horrible; hardly horrible at all, only just like the rest of us; or horrible, yet seen eventually with a certain understanding.

All this is to say no more than that One Fat Englishman has subtle aspects under the accus- tomed bluntness, even savagery, of the Amis approach. Helene's husband, for example, is as well done as herself. Some of the drunken scenes where jazz is played in New York are as uproarious as anything in Lucky litn. Neverthe- less, though the love affairs may be farcical, they are none the less unhappy. The style is severely factual, up-to-the-minute matters are referred to. Owing to the public persona, these aspects may lead people to suppose that the author is com- plaining about what, so to speak, happened last week. It seems to me that is not what Amis is concerned with. He is complaining about life, finding it an unpleasant business, but funny too.