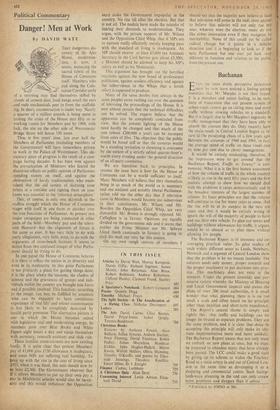 seems, menacing the sacred fabric of the House of Commons itself. Members who pad along the Corn- - mittee Corridor early of a morning may find themselves stifled by clouds of cement dust, loud bangs assail the cars .and rude mechanicals peer in from the scaffold- ing. In short, reconstruction is under way. Nearly a quarter of a million pounds is being spent in turning the attics of the House into fifty or so working rooms for Members and by 1968, with luck, the site on the other side of Westminster Bridge Street will house 150 more.

Thus in five years' time, just over half the Members of Parliament (including members of the Government) will have somewhere private to work in the Palace of Westminster. This ele- mentary piece of progress is the result of a cam- paign lasting decades. It has been won against the prevarication of Ministers who feared the disastrous effects on public opinion of Parliament spending money on itself, and against the obstruction of hardy traditionalists who main- tained that the old system of dictating your letters in a corridor and signing them on your knees was essential to the 'informal atmosphere.'

This, of course, is only one skirmish in the endless struggle which the House of Commons wages with itself in one form or another over the true functions of Parliament. At present two major campaigns are being conducted in other parts of the field—Members' pay and the televi- sion Hansard—but the alignment of forces is the same as ever. It has very little to do with party allegiances, very little, even, to do with the arguments of cross-bench factions. It seems to derive from two confused images of what Parlia- ment should be trying to do.

In one mood the House of Commons believes

it is there to reflect the nation in its diversity and even in its mediocrity. In this guise Parliament is not primarily a place for getting things done, it is the place where the tensions, the clashes of interest and the grievances of groups and indi- viduals within the country are brought into focus and if possible resolved. This function, according to the image, can best be fulfilled by amateurs who can be expected to have continuous experience of 'real life' and whose commonsense is less likely to be completely destroyed by sordid party pressures. The alternative picture is one in which the House becomes seized with legislative zeal and modernising energy, its members pore over Blue Books and White Papers eight hours a day and equip themselves with secretary, research assistant and slide rule.

These familiar cross-currents are now swirling busily. It is quite clear that present Members' pay of £1,000 plus £750 allowance is inadequate, and some MPs are suffering real hardship.. To 'teen up with the rise in the cost of living since 1957, when it was fixed, this sum should now be et least £2,300. The Government observes that if it allows Members to put up their own pay a rise in Ministerial salaries would also be inevit- able and this would (whatever the Opposition says) make the Government unpopular in the country. No rise till after the election. But that is not,all. The zealots have made the mistake of linking their demands to modernisation. They argue, with the private support of Mr. Wilson and the Opposition Chief Whip, that if MPs are to operate really efficiently merely keeping pace with the standard of living is inadequate. An MP should receive at least £3,000 (an Assistant Secretary in the Civil Service gets about £3,300); a Minister should be allowed to keep 'his MP's salary as well as his Ministerial.

This argument has brought out the horrified reactions against the new breed of professional politicians, against soulless efficiency and against the subservience to the Whips that a lavish salary is supposed to produce.

Many of the same doubts (not always in the same people) come rushing out over the question of televising the proceedings of the House. It is now almost certain that the technical difficulties can be solved. The experts believe that the apparatus can be completely concealed from view, that the present lighting of the House need hardly be changed and that much of the cost (about £200,000 a year) can be recouped from sales of film. The objection that the public would be bored stiff or that the cameras would be a standing invitation to clowning is overcome by the notion of a strictly edited quarter-hour's- worth every evening under the general direction of an all-party committee.

We are therefore back to principles. In essence the issue here is how far the House of Commons can be a world sufficient to itself. Many Members still believe that they themselves bring in as much of the world as is necessary and one eminent and notably liberal Parliamen- tarian told MC the other day that if television came in Members would become too subservient to their constituents. Mr.' Wilson and Mr. Bowden the Opposition Chief Whip, are very distrustful. Mr. Brown is strongly opposed. Mr. Callaghan is in favour. Opinions are equally divided on the government side and it seems that neither the Prime Minister nor Mr. Selwyn Lloyd (both cautiously in favour) is going,. to stick his neck out very far this session.

On my own rough canvass of members I

should say that the majority now believe- at least that television will come in the end; most appear to believe that salaries will not only rise but soar, whoever wins the election; many do not like either innovation even if they recognise its inevitability. None of this could yet he called radical change but it points in a definite direction and it is beginning to look as if the next Parliament but one may yet look very different in function and relation to the public from the present one.