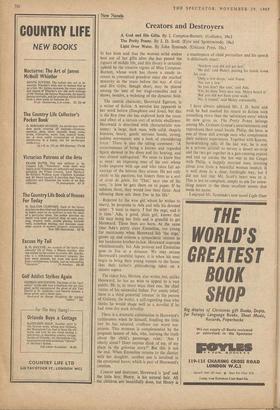 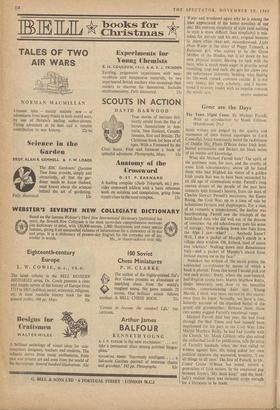 IT has been said that the woman artist makes best use of her gifts after she has passed the rigours of middle life, and this theory is certainly upheld by the creative vigour of Miss Compton- Burnett, whose work has shown a steady in- crease in conceptual grandeur since she reached maturity in the years before the war. A God and Ills 'Gilts, though short, may be placed among the best of her tragi-comedies and it shows, besides, a widening of the dynamic field.

The central character, Hereward Egerton, is a writer of fiction. A novelist has appeared in her work before (Daughters and Sons), but this is the first time she has explored both the cause and effect of a certain sort of artistic ebullience. Hereward is described with characteristic eco- nomy: 'a large, dark man, with solid, shapely features, heavy, gentle nervous hands, strong, sudden movements and a look of smouldering force.' There is also the telling comment: 'A consciousness of being a known and regarded figure showed in his dress and his bearing, and was almost undisguised.' We seem to know him at once: an imposing man of the sort whose looks improve with age and who takes full ad- vantage of the interest they arouse. He not only yields to his passions, but fosters them as a sort of droll de genie, for 'That,' says one of his sons, 'is how he gets them on to paper. If he subdues them, they would lose their force. And releasing them sets them free in his life.'

. Rejected by the wise girl whom he wishes to marry, he proposes to Ada and tells his devoted sister: 'I want to marry. I feel the urge, and it is time.' Ada, a good, plain girl, knows that life may bring her little and is grateful to get Hereward. Three boys are born. At the same time Ada's pretty sister Emmeline, too young for matrimony when Hereward felt 'the urge,' grows up and evinces a sympathetic interest in her handsome brother-in-law. Hereward responds wholeheartedly, but Ada protests and Emmeline goes to live at a distance. We may excuse Hereward's youthful lapses; it is when his sons begin to bring their young women to the house that their father's philandering takes on a sinister aspect.

The eldest boy, Merton, also writes, b'ut, unlike Hereward, he has no wish to appeal to a vast public. He is, in more ways than one, the chief victim of his successful father. For comic relief, there is a third potential 'creator' in the person of Galleon, the butler, a self-regarding man who thinks he would shape well as a novelist if he had time for such frivolity.

There is a dramatic culmination to Hereward's ruthlessness when he himself, fondling the little boy he has adopted, confirms our worst sus- picions. This moment is complemented by the poignant lament of Ada, who, learning the truth about the child's parentage, cries: 'Am I utterly alone? Does anyone think of me, of my place in the grievous story?' But this is not the end. When Emmeline returns to the district with her daughter, another son is involved in the emotional havoc which is part of Hereward's creation.

Creator and destroyer, Hereward is 'god' and the little boy, Henry, is his natural heir. All the children are beautifully done, but Henry is a masterpiece of child portraiture and his speech is deliciously exact :

'Anyhow you did not get wet.'

'He did,' said Henry, passing his hands down his coat.

'Only a few drops,' said Nurse.

`Yes, he does. Very nice rain, Henry heard it.'

'But you did not have your walk.'

'No, it rained,' said Henry contentedly.

I have always admired Mr. J D. Scott and wish he had marked his return to fiction with something more than the 'adventure story' which he now gives us. The Pretty Penny belongs among Mr. Graham Greene's entertainments and reproduces their usual locale. Philip, the hero. is one of those dull average men who complement their unlikely experiences. Together with Kearns, hard-drinking relic of the last war, he is sent in a private aircraft to survey a desert air-strip and the two get together in a gun-running exploit and end up amidst the hot war in the Congo with Philip, a happily married man, learning about love from a beautiful woman medico. It is well done in a clear, forthright way, but I did not feel that Mr. Scott's heart was in it. This is not to complain; simply to ask for some- thing nearer to the three excellent novels that made his name.

Water and wondered again why he is among the least appreciated of the better novelists of our day. His extreme simplicity of style (and nothing in style is more difficult than simplicity) is mis- taken for naivety and his wry, original humour is, more often than not, misunderstood. Light Over Water is the story of Peggy Trimnell, a Battersea girl, who aspires to be the Great Mother of the Hindus, but is let down by her own physical nature. Having no luck with the hero, who is much more eager to practise astral travelling, yogi and such, she gets her claws into the unfortunate alchemist, Sedding, who, finding his life-work ruined, commits suicide. It is not only funny, but very scholarly, and I recom- mend it to every reader with an impulse towards