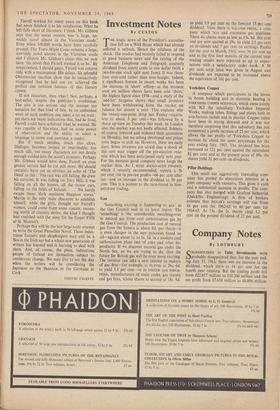 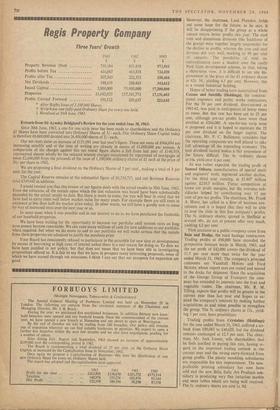 SHAREHOLDERS in Tube Investments were probably disappointed that, for the year end- ing July 31, 1963, there was no increase in the dividend, which stays at 14 per cent for the fourth year running. But the trading profit fell from £22.017 million to £18.200 million and the net profit from £7.650 million to £6.806 million. However, the chairman, Lord Plowden, holds out some hope for the future; as he says, it will be disappointing if the group as a whole cannot return better profits this year. The steel tube and aluminium divisions (the backbone of the group) were together largely responsible for the decline in profits, whereas the iron and steel division did very well, working to 90 per cent of capacity. The possibility of steel re- nationalisation casts a shadow over the costly Park Gate development scheme, so that, taking a short-term view, it is difficult to see any im- provement in the price of the it ordinary shares at 62s. 3d., yielding 4.5 per cent. However, this is a sound industrial holding.

Hopes of better trading have materialised from Cozens and Sutcliffe (Holdings), the construc- tional engineers and public works contractors. For the 30 per cent dividend, short-earned in 1961-62, was paid in anticipation of better times to come. But this rate has been cut to 25 per cent, although pre-tax profits have more than doubled at £266,000. A one-for-ten scrip issue is proposed and it is hoped to maintain the 25 per cent dividend on the larger capital. The chairman, Mr. F. C. Bullimore, considers that the operating companies are well placed to take full advantage of the expanding economy. The past dividend record makes a fair assessment of the future difficult. The 4s. ordinary shares at 16s. yield over 6 per cent.

As was rather expected, the trading profit of Samuel Osborn, manufacturers of special steels and engineers' tools, registered another decline, for the third year running, at £1.807 million against £2.013 million. Fierce competition at home cut profit margins, but the overseas sub- sidiaries helped by contributing over 15 per cent of pre-tax profits. The chairman, Mr. Frank A. Hurst, has called in a firm of business con- sultants and it is hoped that they will be able to stop the slide in this fine company's profits. The 5s. ordinary shares, quoted in Sheffield at around 48s., do not at present offer very much, yielding 4.2 per cent.

First accounts as a public company come from Rain and Hodge, the road haulage contractors. Trading profits at £96,000 have exceeded the prospective forecast made in March, 1963, and the net profit of £42,000 covers the dividend of 11.5 per cent more than twice for the year ended March 31, 1963. The company's principal customers are Vauxhall Motors and Ford Motors, whose export cars are crated and moved to the docks for shipment. Since the acquisition of the George Group of Transport the coin- pany.has extended its interests into the fruit and vegetable trades. The chairman, Mr. R. M. Tilling, expects that profits will be greater in the current year than last year and hopes to ex- pand the company's interests by making further acquisitions as and when possible to strengthen the group. The 5s. ordinary shares at 12s., yield- ing 5 per cent, have possibilities.

Trading profits from Crystalate (Holdings) for the year ended March 31, 1963, suffered a set- back from £80,083 to £48,628, but the dividend remains unchanged at 12.5 per cent. The chair: man, Mr. Jack Lesser, tells shareholders that he feels justified in paying this rate, having re- gard to the improved trading outlook in the current year and the strong carry-forward from group profits. The plastic moulding subsidiaries are responsible for this improvement. The non- profitable printing subsidiary has now been sold and the new Bella Italic Art Products sub- sidiary is producing very fine imitation marble and onyx tables which are being well received. The Is. ordinary shares are now Is, 9d.