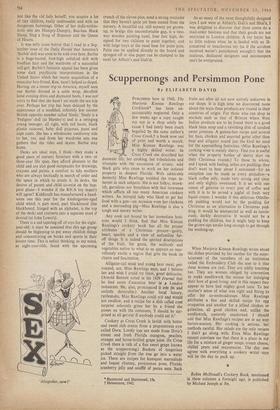 By. ELIZABETH DAVID Any cook not bound by her immediate hori- zons would I think, find that Miss Kinnan Rawlings's cookery book has all the proper attributes of a Christmas present—gaiety, heart, sparkle and a view of unfamiliar far- off things. It is indeed the spirited descriptions of the fruit, the game, the seafoods and vegetables native to what to us appears so mar- vellously exotic a region that give the book its' charm and fascination.

Alligator-tail steak and young bear meat, pot- roasted, are, Miss Rawlings says, and I believe her and wish I could try them, great' delicacies. (Arnold Bennett noted in his 1929 Journal that he had eaten Caucasian bear in a London restaurant. He, also, pronounced it tres fin and entirely delectable.) Another local luxury, rattlesnake, Miss Rawlings could not and would not swallow, and a recipe for a dish called coot surprise solemnly given her by a friend she passes on with the comment, 'I should be sur- prised as all get-out if anybody could eat it.'

Cookery at Cross Creek is lavish with butter and sweet rich cream from a preposterous cow called Dora. Lovely ices are made from Dora's cream and fresh Florida mangoes, peaches, oranges and home-bottled grape juice. (In Cross Creek there is talk of a fine sweet grape known as the scuppernong.) Buckets of tangerines picked straight from the tree go into a water ice. There are recipes for kumquat marmalade and loquat chutney, persimmon pone, Florida 'cranberry jelly and soufflé of pecan nuts. Such.

fruits are after all not now entirely unknown in our shops. It is high time we discovered more about the ways these products are treated in their countries of origin. For those who can shop in markets such as that of Brixton where West Indian products are to be found there is a good black bean soup and a ravishing dish of candied sweet potatoes. A guinea-hen recipe and several for ham, chicken and assorted game-other than bear and alligator sound just the kind we need for the approaChing festivities. (Miss Rawlings's cooking wine is mainly sherry. That too is useful when the property bottles of sherry start on their Christmas rounds.) To those to whom, and I speak with feeling, jellies are puddings they don't want to hear about I commend—for an exception can be made to every prejudice—a black coffee jelly, made very strong and clear and only slightly sweetened. It is set with one ounce of gelatine to every pint of coffee and with it is to be served a jugful of fresh very liquid cream. I wonder if this delicious Othello- ish pudding would not be the pudding for Christmas as an alternative to Christmas pud- ding. It would be unexpected as well as lumin- ously, darkly decorative. It would not be a pudding for children, but it might help to keep the grown-ups awake long enough to get through the washing-up.

When Marjorie Kinnan Rawlings writes about the dishes provided by her mother for the enter- tainment of the members of an institution called the Embroidery Club she sees to it that these women are real. They are oddly touching too. They are women obliged by convention to make needlework the excuse for indulging • their love of good living; and in this respect they appear to have had mighty good taste. To her mother's sense of what was right and fitting to offer her co-embroidresses Miss Rawlings attributes a fine and skilled recipe for egg croquettes and another for a jellied chicken or galantine, all good chicken and, unlike the needlework, austerely unadorned. I should add that Miss Rawlings's recipes are in no way harum-scarum. Her cooking is serious, her methods careful. Her salads are the only recipes I don't go along with. Even Miss Rawlings cannot convince me that there is a place in my life for a mixture of ginger snaps, cream cheese, chilled pears and mayonnaise. The day one agrees with everything a cookery writer says will be the day to pack up.

Robin McDouall's Cookery Book, mentioned in these columns a fortnight ago, is published by Michael Joseph at 30s.