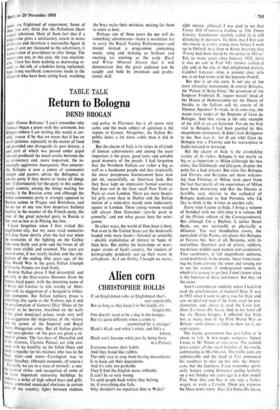 'Addio Grasso Bologna.' I can't remember why Carducci began a poem with this sentiment, but Bologna (where I am writing this week) is cer- tainly 'grassa' if by that we mean that it has an " air of opulence, especially in the matter of food and provided one disregards its past history, a great part of which was passed under papal rule and produced the usual strains between the lay aristocracy and, more important, the in- creasingly aggressive bourgeoisie: Not unnatur- ally, Bologna is now a centre of communist strength and posters advise the Bolognesi to join the party if they desire to 'make all things new.' Unfortunately for the party in this sophis- ticated country, among the things making for novelty, is the Russian army and although the Italian communist party is strongly opposed to Russian action in Prague and Bratislava, and has no (or at any rate few) desperate Stalinist loyalists in the manner- of the French party, th_e stock of the great- paternal party in Russia is low: not as low as in Peking, but low.

I have forgotten when I first visited this magnificent city, but my most vivid memories of it date from shortly after the last war when the memories of the fighting on the Gothic Line were lively and grim and the losses of all kinds were visible and resented. The scars are covered over, if not totally healed, and the cele- brations of the ending, fifty years ago, of the First World War in the great Italian triumph of Vittoria Veneto are kept lively.

Modern Italian prose I find distasteful, and not only in the Osservatore Romano. Even the famous local paper, with the charming name of II Resta del Carlino (a title worthy of Aber- deen with its suggestion of a bargain) is irritat- ingly pompous. But Italian lapidary prose is something else again as the Yankees put it and the proclamation of General Diaz 'Duke of the Victory' as he became, inscribed on the walls of the great municipal palace, reads very well if it exaggerates the importance of the victory and the power of the Imperial and Royal Austro-Hungarian army. But all Italian glories —and near-glories—of the past are given a re- spectful glance. The last days of Mussolini and of his mistress, Claretta Petacci are told over again with no hostility to the fallen Duce and much sympathy for his mistress who was to the Duce what—and more—Carrington was to Lytton Strachey. (Mutatis mutandis, of course.) Formally we are in a state of turmoil: a one- day general strike; and occupation of some of the most important university buildings by students; a strike of high school boys and girls; bitterly contested municipal elections in certain parts of the country; fights between students

and police in Florence; but it all seems very calm, and the main subject of agitation is the regime in Greece. Altogether, the Italian Re- public looks a lot more stable than it did in 1946.

But the charm of Italy is its riches in all kinds of human achievements and among the most important is the grace, good looks and amiable good manners of the people. I had forgotten that the Northern Italians are rather a big as well as a handsome people and they (especially the more prosperous businessmen) have now put on, successfully, an American look. But they have kept an impressive formal courtesy that does not in the least recall New York or Paris or even London. There are more beauti- ful girls even than in Dublin and the Italian notion of a mini-skirt would seem ludicrously square in London. These young women would still attract Don Giovanni--`perche porti la gonnella,' and not what passes here for mini- gonne.

In other ways, the world of Don Juan is here. Not even in the United States are the bookstalls loaded with more books—fictional or scientific —plainly exploitative of interest in 'topic A' than here. But unlike the bookshops or news- paper stands of God's country, the vendors of pornography prudently seal up their wares in cellophane. As I am thrifty, I bought no wares, sight unseen, although I was glad to see that Fanny Hill (Francesca Coilina as The Times

distancing its pursuers. To think that I first saw this classic as a very young man, before I went up to Oxford, in a shop in Rome boasting that

`Fanny had been seized by the police in Milan.' Yet, so many years since January 1923, there it was on sale in Paul VI's former cathedral city and in the city of that enlightened prelate,

Cardinal Lercaro--who, a scandal sheet tells me, is on bad terms with the Supreme Pontiff.

But that is an old story. Is not one of the most attractive monuments in central Bologna, the 'Palace of King Enzo,' the grandson of the

Swabia as the Italians call it), cousin of St Thomas Aquinas? It rivals, in its own way, the statue (very nude) of the Neptune of Gian da Bologna. And that statue is the only example of my skill as an art historian. For on my first visit to Bologna I had been puzzled by this magnificent monument. It didn't look Bolognese to me. Nor was it: for (I am told) Gian da Bologna was a Fleming and his masterpiece is badly imitated in Antwerp.

But the charm of Italy is the astonishing variety of its riches. Bologna is not nearly as big or as important as Milan (although the two cities, like Edinburgh and Glasgow, dispute the palm for a bad climate). But cities like Bologna and Ferrara and Bergamo are more welcom- ing than Florence or Milan, even apart from the fact that nearly all my experiences of Milan have been distressing and that the Duomo is horrible, very inferior to the cathedral of Bologna dedicated to San Petronio, who I'd like to think is, the Arbiter in another role.

Every time I come to Italy, I bring a volume of Stendhal with me (this time it is volume III of the Pleiade edition of the Correspondence). But although I'm a Beyliste, I, unlike Henri Beyle, am not spiritually or physically a Milanese. The real Stendhalien towns, the equivalent of his Parma, are places like Bologna or Ferrara but, best of all, Bergamo, with its marvellous theatrical cast of priests, soldiers, mysterious middle-aged women and carabinierl. Two carabinieri, in full magnificent uniform, stand pointlessly in the piazza. Apart from keep- ing me from crossing the street and forcing me to use the system of underground tunnels in which it is so easy to get lost, I don't know what is the function of these funzionari. But they set the scene.

And I remembered suddenly where I had first read the proclamation of General Diaz. It was in 1922 when I went to get a visa for Italy and saw an idealised map of the front, read the pro- clamation, and. above it, read the Latin text. Haec Est Italia Dis Sacra. And in my hotel all the via Monte Graepa, I reflected that Italy lost as many men in the First World War as Britain—with almost as little to show for it, ex- cept victory.

The Leone government has just fallen or is about to fall. A newspaper compares Signor Leone to Mr Nixon or vice versa. The scandal press covers all the royal families of the world, culminating in Mrs Onassis. The traffic jams are unbelievable and the head of Fiat announces his readiness to take on not only the Ameri- cans, but the Japanese. I can remember spirit- ually hungry young Bolognesi gazing lustfully on a wet Sunday ten years ago at a new model Fiat. Now they can buy at any rate a Volks- wagen, or even a Citroen. These are victories the Duce never knew. Haec Est Italia Dis Sacra.