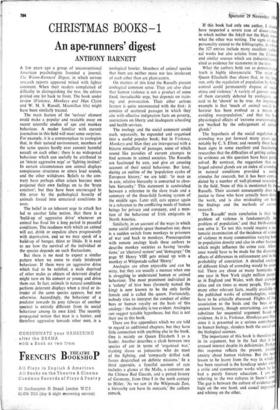 A few years ago a group of unconventional American psychologists founded a journal, The Worm-Runners' Digest, in which serious research reports appeared mixed with lighter comment. When their readers complained of

difficulty in distinguishing the two, the editors printed one lot back to front. The book under review (Violence, Monkeys and Man Claire and W. M. S. Russell, Macmillan 63s) might have been similarly treated.

The main feature of the 'serious' element could make a popular and readable essay on recent scientific studies of ape and monkey behaviour. A reader familiar with current journalism in this field will meet some surprises. For example, it is a commonplace to zoologists that, in their natural environment, members of the same species hardly ever commit harmful assault on each other: there is no widespread behaviour which can usefully be attributed to an 'innate aggressive urge' or 'fighting instinct.' Ili certain circumstances one animal displays conspicuous structures or utters loud sounds, and the other withdraws. Beliefs to the con- trary have perhaps often arisen because men projected their own feelings on to the 'brute creation'; but they have been encouraged in this error by the pathological ferocity of animals forced into unnatural conditions in zoos.

The belief in an inherent urge to attack has led to another false notion, that there is a 'build-up of aggressive drive' whenever an animal has lived for a long period in peaceful conditions. The readiness with which an animal will eat, drink or copulate alters progressively with deprivation, and so we may speak of a build-up of hunger, thirst or libido. It is easy to see how the survival of the individual or the. species depends on such fluctuations.

But there is no need to expect a similar pattern when we come to study intolerant behaviour. If there were an aggressive drive which had to be satisfied, a male deprived of other males as objects of deterrent display might turn on his consort or young and drive them out. In fact, animals in natural conditions perform deterrent displays when a rival or in- truder of the same species appears, but not otherwise. Accordingly, the behaviour of a predator towards its prey (always of another species) is entirely different from its social behaviour among its own kind. The recently propagated notion that man is a hunter, and therefore aggressive towards other men, is a zoological howler. Members of animal species that hunt are neither more nor less intolerant of each other than are plant-eaters.

On matters of this kind the Russells present zoological common sense. They are also clear that human violence is not a product of some fixed, ineradicable urge, but depends on train- ing and provocation. Their other serious feature is quite unconnected with the first: it consists of scattered passages in which they cite with effective indignation facts on poverty, restrictions on liberty and inadequate schooling and health services.

The zoology and the social comment could each, separately, be expanded and organised into a useful popular book; but in Violence, Monkeys and Man they are interspersed with a bizarre miscellany of passages, some of which sound like parodies of current attempts to find sermons in animal societies. The Russells are fascinated by cats, and give an amusing account of their social behaviour. But later, during an outline of the 'population cycles of European history,' we. are. told: 'in man as in cats, relative hierarchy is converted to abso- lute hierarchy.' This statement is sandwiched between a reference to the slave trade and a summary of the three-field_ farming system of the middle ages. Later still, cats appear again in a reference to the conflicting needs of human beings for privacy and company, and a men- tion of the behaviour of Irish emigrants in North America.

Similarly, in an account of the ways in which some sociaraninnala space themselves out, there is a sudden switch from monkeys to prisoners of war and back to monkeys. Preoccupation with remote analogy leads these authors to describe monkey societies as having 'revolu- tions,' an 'electoral system' and 'demagogy.' On page 95 Henry VIII gets mixed up with a monkey at Whipsnade called 'Henry.'

Analogies are often enjoyable and can be witty, but they are usually a menace when one is struggling to understand human or animal behaviour. The most prominent individual in a 'colony' of hive bees (formerly named the king) is now known to be the only fertile female and is called the queen. Fortunately, nobody tries to interpret the conduct of either bees or human royalty on the basis of this analogy : the absurdity is too evident. Analogies can suggest testable hypotheses, but that is not their use in this book.

There are five appendices which we are told to regard as additional chapters, but they have little connection with anything else in the book. One is mainly on Queen Elizabeth I as a leader. Another describes a clash between two species of ant in terms of 'organised war,' training slaves as janissaries who do most of the fighting, and 'compactly drilled task forces despatched on definite missions.' In a third appendix, a fanciful account of rats includes a glance at the Mafia, a comment on the Chinese Red Guards, and a potted history of Germany, from Otto I in the tenth century to Hitler. 'As we saw in the Whipsnade Zoo, a hierarchy can have its outcasts,' the authors remark.

If this book had only one author, I shou have suspected a severe case of dissochitio in which neither the Jekyll nor the Hyde kne what the other was writing. The signs of d personality extend to the bibliography, in whic the 327 entries include many excellent techn cal works but also articles from the Lisrene and similar sources which are indiscriniinatel cited as evidence for statements in the text.

What the authors hold out as demonstrate truth is highly idiosyncratic. 'The reign o Queen Elizabeth thus shows that, in the lon run, only the regulation of population by birth control could permanently dispose of soc stress and violence.' A variety of guesses. som of them currently debated by zoologists, ar said to be 'shown' to be true. An importan example is that 'much of animal social be haviour has been evolved as a means o avoiding overpopulation,' and that the ba physiological effects of 'extreme overcrowdin are 'marked by the enlargement of certai glands.'

The hypothesis of the social regulation o crowding was put forward many years ag notably by C. S. Elton; and recently there hay been signs in some excellent and fascinatin researches that the difficulties of getting authen tic evidence on this question have been partl solved. By contrast, the suggestion that en larged adrenal glands are an index of crowdin in natural - conditions provided a use stimulus for research, but it has been contra dicted by a number of well-planned researche in the field. None of, this-,is mentioned by th Russells. Their account consequently does n justice to those who have actually been doin the work, and is also misleading on be the findings and the methods of curren research.

The Russella' main conclusion is that 'th problem of violence is fundamentally th problem of population,' and that birth-contro can solve it. To test this would require a sys tematic' examination of the,ittleidence of crime of violence in many communities varying bo in population density and also in other feature which might influence the crime rate. Allow ance would have to be made for the distortin effects of differences in enforcement and in t probability of conviction. A detailed analys of different kinds of crowding would be essen tial. There are about as"-many homicides one year in New York (eight million people as in England and Wales, with their crowde cities and six times as many people. This a many other relevant facts, readily available the published works of criminologists, wo have to be critically discussed. Flights of fr association to the birds and the bees or t ancient history, though entertaining, are not substitute for sequential argument based 0 evidence. As it is, Violence, Monkeys and Ma since it is presented as a serious contributio to human biology, slanders both the social a the biological sciences.

The importance of this book is therefore n in its argument, but in the fact that it ha aroused interest despite its deficiencies. Perhat, this response reflects the present, justili, anxiety about human violence. But the ma lesson to be learnt from the way in which I has been received is the handicap under whic a critic and commentator works when he had a purely literary education. I am no referring to the two cultures in Snow's Sens.' The gap is between the culture of evidence a logic on the one hand, and casual impressio and whimsy on the other. .