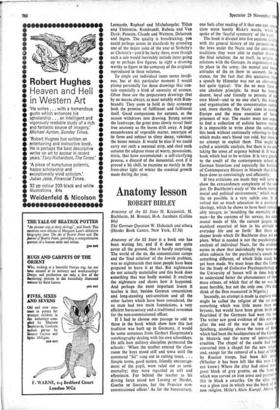 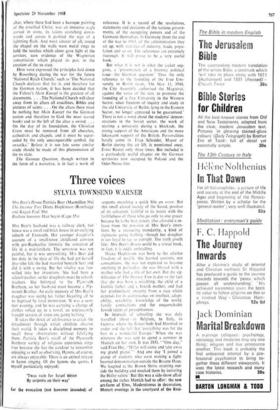 Anatomy of the SS Stale H. Krausnick, H. Buchheim, M. Broszat, H-A. Jacobsen (Collins 84s) The German Question W. Hubatsch and others (Herder Book Centre, New York, $7.50) Anatomy of the SS State is a book one has been waiting for, and if it does not quite cover all the ground, that is hardly surprising. The world of the ss, the concentration camps and the 'final solution' of the Jewish problem, was so nightmarish that most people have been prepared to leave it at that. But nightmares do not actually materialise and this book does something that was badly needed. It analyses the nightmare and shows how it happened. And perhaps the most important lesson it teaches is that, besides German romanticism and long-standing anti-semitism and all the other factors which have been considered, the ss state had two main foundations, a very efficient bureaucracy and a traditional reverence for the non-commissioned officer.

If I had to choose one passage to add to those in the book which show how this last tradition was built up in Germany, it would be some sentences from Gerhart Hauptmann's autobiography dealing with his own schooldays. He tells how military discipline permeated the schools: 'When the teacher entered the class- room the boys stood stiff and tense until the command "Sit" rang out in cutting tones. . . . Simple terms, good nature, friendly encourage- ment of the pupil, were ruled out as senti- mentality; they were regarded as soft and effeminate. For behind the teacher as his driving force stood not Lessing or Herder, Goethe or Socrates, but the Prussian non- commissioned officer.' As for the bureaucracy,

one feels after reading of it that one canpp- ciate more keenly Blake's words, when hen 'h spoke of the 'fearful symmetry' of the t:er.

The book is divided into five sections Li,:a1;r with the general history of the persecution c the Jews under the Nazis and the anti-sent;'; traditions they were able to exploit do,.‘n the final solution; the ss itself, its oriuins, relations with the Gestapo, its organisation an its place in the army; the mental and mor attitudes of the ss (how to account, for in stance, for the fact that this quotation fro a speech by Himmler was not an aberratio but quite typical: Tor the ss man there one absolute principle; he must be bone) decent, loyal and friendly to persons of o own blood—and to no one else'); the histii and organisation of the concentration camps and, more shortly, the Nazis' aims in easte Europe and the mass execution of So prisoners of war. The reader must not expe to find a collection of sadistic horror store It is impossible to write about the subject a this book without continually referring to fac which make one's blood run cold, but there • no attempt to exploit them. This might b called a scientific analysis, but there is no mis taking the sense_of urgency behind it. It was book which had to be written. It is very great to the credit of the contemporary school o German historians and especially the Institut of Contemporary History in Munich that it h been done so convincingly and efficiently.

If two criticisms are made they will serve show the extraordinary complexity of the su ject. Dr Buchheim's study of 'the whole men' moral and political environment,' which mac' the ss possible, is a very subtle one. It volved not so much education in a partied ideology, which he shows to have been remar ably meagre, as 'moulding the mentality of man—by the customs of his service, his co. munal mode of life, the current jargon. th standard expected of him in his attitude everyday life and so forth.' But there ar deeper levels which Dr Buchheim does not e plore. What is needed is not the psycholoeic analysis of individual Nazis, for the evideri seems to show that individually they were it often subjects for the psychiatrist's couch, b something different, of which little study b yet been made. We must hope that the Centr for the Study of Collective Psychopathology the University of Sussex will in time help to understand better the phenomenon of the mass crimes, of which that of the ss was it most horrible, but not the only one. (We nt think of the Ibos massacred in Nigeria.) Secondly, no attempt is made to explore 1■11 might be called the religion of the ss star something which was little more than e bryonic, but would have been given birth an flourished if the Germans had won the as The writer saw good evidence of this not Ion after the end of the war in the castle Spielberg, standing above the town of Brn which had been the headquarters of the Gestar in Moravia and the scene of unimaain.lb cruelties. The chapel of the castle had bee converted into a chapel for the new religio and, except for the removal of a bust of pl. by Russian troops, had been left inLi, (Whether it has been left like this now II, not know.) Where the altar had stood was great block of grey granite, on the front which was carved an iron cross and paintec‘ this in black a swastika. On the altar . was a glass case in which was the book of :r new religion, Hitler's Mein Kampf. Above altar, where there had been a baroque painting of the crucified Christ, was an immense eagle carved in stone, its talons stretching down- wards and across it painted the sign of a lightning flash. And most sinister of all, round the chapel on the walls were metal rings to hold the torches which alone gave light at the services, sure evidence of the Wagnerian romanticism which played its part in the creation of the ss state.

Here were expressed the principles laid down by Rosenberg during the war for the future `National Reich Church,' such as 'The National Church declares that for it, and therefore for the German nation, it has been decided that the Fiahrer's Mein Kanipf is the greatest of all documents. . . . The National Church will clear away from its altars all crucifixes, Bibles and pictures of saints.. . . On the altars there must be nothing but Mein Kampf (to the German nation and therefore to God the most sacred book) and to the left of the altar a sword. . . . On the day of its foundation, the Christian Cross must be removed from all churches, cathedrals and chapels, and it must be super- seded by the only unconquerable symbol, the swastika.' Before it is too late some similar study should be made of this phenomenon of the ss state.

The German Question, though written in the form of a narrative, is in fact a work of reference. It is a record of the resolutions, statements and decisions of the various govern- ments, of the occupying powers and of the Germans themselves, in Germany from the end of the war to 1963, of the administration they set up, with statistics of industry, trade, popu- lation and so on. "f he references are extremely thorough. It will prove to be a very useful book.

But what it is not is what the jacket sug- gests, a 'presentation of a burning political issue—the German question.' Thus the only reference to the founding of the Free Uni- versity in Berlin reads, 'On May 11, 1948, the City Assembly authorised the Magistrat, against the votes of the SED, to promote the founding of a free University in the Western Sector, since freedom of inquiry and study in the old University of Berlin, lying in the Eastern Sector, no longer appeared to be guaranteed.' There is not a word about the students' demon- strations in the Soviet sector, the work of starting a university during a blockade, the strong support of the Americans and the more lukewarm support of the British. Personalities hardly come in. Frau Schroder, Mayor of Berlin during the air lift, is mentioned once; Ernst Reuter only three times. But included is a particularly useful chapter on the German territories now occupied by Poland and the Oder-Neisse line.