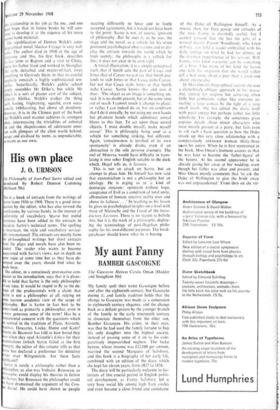 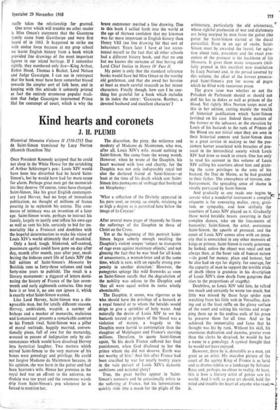 My family spelt their name Gascoigne before and after the eighteenth century, but Gascoyne during it; and family tradition holds that the change to Gascoyne was made as a concession to eighteenth century elegance, and the change back as a defiant gesture by the younger branch of the family in the early nineteenth century to dissociate themselves from the elder son, Bamber Gascoyne. His crime, in their eyes, was that he had used the family fortune to buy his only daughter into the highest society, instead of passing some of it on to his com- paratively impoverished nephew. The lucky heiress, whose income was £12,000 per annum, married the second Marquess of Salisbury, and this book is a biography of her early life, combined with an edition of the diary which she kept for eleven years, from 1827 to 1838.

The diary will be particularly welcome to his- torians of this crucial period in English politi- cal development, as Fanny Salisbury led a very busy social life among high Tory circles and even became a close friend and confidante of the Duke of Wellington himself. As a source, then, for Tory gossip and attitudes of

the time Fanny is decidedly useful; but I

cannot pretend that she has the gifts of a natural diarist. Parson Woodforde, who knew nobody, can hold a reader enthralled with his daily jottings on what he had for dinner, or the drunken impertinence of his servant, Will. Fanny, who knew everyone, can be something of a bore. I ike many of her kind she leaves one with the suspicion that she would rather tell a bad story about a peer than a good one about anyone else.

In Miss Oman's biographical section she uses a disturbingly oblique approach to her narra- tive, aiming for surprise but achieving often little but confusion, rather like someone re- vealing a large canvas by the light of a very small torch. She has edited the diary itself with great energy but perhaps rather too little selectivity. For example, she sometimes gives copious details about minor characters who were merely present at a party, but fails even to ask such a basic question as how the Duke struck up this very close relationship with a comparatively unknown woman thirty-three )(tsars his junior. When he is first mentioned in the book, Miss Oman's footnote assures us that he was later to become the 'father-figure' of the heiress. At his second appearance he is already giving her away at her wedding. even though her father was alive and present; and Miss Oman merely comments that `to ask the Duke of Wellington to give the bride away was not unprecedented.' From then on she vir-

tually takes the relationship for granted.

One error which will trouble no other reader is Miss Oman's statement that the Gascoyne family came from Gawthorpe and were first heard of in 1663. It happened to strike me with undue force because at my prep school we learnt English history from a book which provided line drawings of the most important figures in our island heritage. If I remember rightly, they numbered only five—King Arthur, Robin Hood, Thomas a Becket, Lord Nelson and Judge Gascoigne. I can see in retrospect that the book must have been somewhat biased towards the simpler sort of folk hero, and in keeping with this attitude it solemnly printed as fact the entirely erroneous popular tradi- tion that Judge Gascoigne imprisoned Prince Hal for contempt of court, which is why the brave commoner merited a line drawing. Due to this book I sallied forth into the world at the age of thirteen confident that my kinsman was far more important in English history than Henry VIII (no line drawing kir that sort of behaviour). Years later 1 have at last accus- tomed myself to the fact that all other schools had a different history book, and that no one but me knows the surname of that boring old Lord Chief Justice in Henry IV Part II.

My point is only that the standard reference books would have led Miss Oman to the worthy old gentleman, and that she owed her heroine at least as much careful research as her minor characters. Finally though, how can I be any- thing but grateful for a book which includes in its index the entry: `Gascoyne, Bamber; a devoted husband and excellent character'?