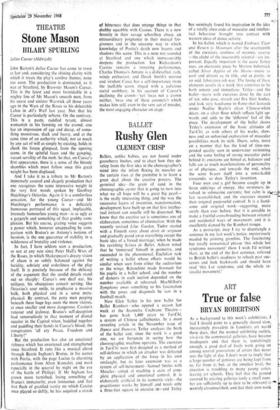 Ballets, unlike babies, are not found under gooseberry bushes, and to chart how they de- velop from the first idea in the choreographer's mind into the infant flexing its muscles as the curtain rises at the premiere is to learn a great deal about, the creative process. The germinal idea—the grain of sand in the choreographic oyster that is going to turn into what we all hope will be a great big pearl— is the really interesting thing, and the way the successive layers of invention, transformation, development have built up on that first intellec- tual irritant can usually still be discerned. We know that the creative act is sometimes one of elaboration, sometimes of eliminaton. With the recently revived Lilac Garden, Tudor started with a Finnish story about droit de seigneur and gradually pared away everything except the basic idea of a forced marriage; when he made his ravishing Scenes de Ballet, Ashton noted that he 'immersed' himself in geometry, and succeeded in the phenomenal, Euclidian task of writing a ballet whose effects would be similar when seen from either the auditorium or the wings. Balanchine made Serenade for his pupils in a ballet school, and the number of dancers in each section depended on the number available at rehearsal; MacMillan's Symphony owes something to his fascination with the poses and diagonals he saw in a football match.

Now Glen Tetley in his new ballet for Ballet Rambert—who opened a season last week at the Jeannetta Cochrane Theatre— has gone back 1,400 years to Tai-Chi, a system of Chinese callisthenics. In a most revealing article in the November issue of Dance and Dancers, Tetley analyses the birth of the ballet and, since the work is a good one, we are fortunate in seeing how the choreographic machine operates. The exercises in Tai-Chi were first designed as a method of self-defence in which an attacker was defeated by an application of the force in his own onslaught, but its later extension was as a system of self-betterment—Samuel Smiles with Muscles—aimed at reaching a state of com- plete physical and emotional control. It is elaborately artificial in its isometric style—the practitioner works by himself and needs only a three-feet square to exercise in—and Tetley

has seemingly found his inspiration in the idea of a totally alien code of muscular and intellec- tual behaviour brought into contact with western ideas of dance activity.

In his ballet; which is named Embrace Tiger and Return to Mountain after the seventeenth

of the exercises, coolness of manner, reserve —the cliche of the inscrutable oriental—are im- portant. Equally important is the score Tetley uses, an electronic piece by Morton Subotnick

called Silver Apples of the Moon—music as cool and distant as its title, and as pretty, in

an odd, laboratory-ish way. The fusing of these elements results in a work that contrives to be both remote and immediate; Tetley—and the ballet—starts with exercises done by the cast of ten, who pose, stretch and flex their bodies, and look very handsome in flame-shot leotards under Nadine Baylis's clean Chinese-white decor, on a silver floor which reflects light up- wards and adds to the 'different' feel of the piece. The development of the ballet shows

Tetley's extension of the basic attitudes of Tai-Chi; as with others of his works, slow-

ness and an unhurried exploration of muscular possibilities mark its style. Duets, solos, insist on a manner that has the kind of time-sus- pended quality seen in underwater swimming and the same feeling of strong muscular pulse behind it; emotions are hinted at, balances and

falls are as much manifestations of personality as of physique, and towards the end, when the score braces itself into a remarkabl6 crescendo, so does Tetley's invention.

Four men and a girl become caught up in fierce eddyings of energy, like swimmers in- volved in submarine currents; but calm is a

last re-established, and the exercises reassert their original purposeful control. It is a hand- some and original work—suggesting, more surely than ever before, that it is possible to make a fruitful cross-breeding' between oriental and occidental ways of movement; and it is excellently danced by the Rambert troupe.

As a postscript, may I try to disentangle a sentence in my last week's notice, mysteriously

mauled by printing gremlins. The fascinating but totally nonsensical phrase 'this whole hot syndrome movement' (how I wish I'd written that), at the end of the first sentence, referred to British ballet's readiness to rehash past suc- cesses and look backwards and should have read 'this Lot syndrome, and the whole re- vivalist movement.'