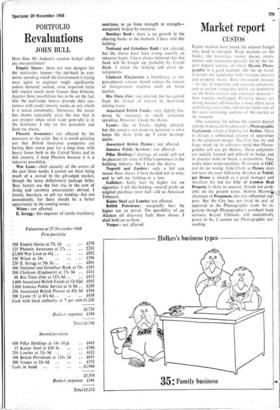 Equity markets have found the autumn budget very hard to interpret. Weak sections are the banks, the breweries, timber shares, stores, motors and companies specially hit by the im- port deposit scheme, of which Dixons Photo- graphic is a good example. On the up trend. however, are companies with overseas interests and property shares. Basic investment strategy —to stay in exporting and overseas companies and to eschew companies which are dependent on the home market and consumer demand— thus remains unchanged. Property shares are strong because inflation has a tonic effect upon underlying asset value: ind:ed this looks one of the most interesting sections of the market at the moment.

One company for whom the import deposit scheme is particularly awkward is Phonographic Equipment, which is bidding for Buttins. There is already a substantial amount of opposition to the proposed merger. The City has, by and large, made up its collective mind that Phono- graphic will not get• Butlins. These judgments are quickly formed and difficult to budge and in practice make or break a proposition. They really relate to personalities. Weinstock at GEC can do no wrong: John Clark at Plessey does not have the same following. Broakes at Trafal- gar House is viewed as a good manager and therefore his bid for City of London Real Property is likely to succeed, though not prob- ably on the present -terms. Robert Maxweir, chairman of Pergamon, also has influential sup- port. But the City-has_ not fixed its seal of approval to the Phonographic team. So in- genious though Phonographic's merchant bank advisers, Keyser Ullmann, will undoubtedly prove to be, I cannot see Phonographic suc- ceeding.