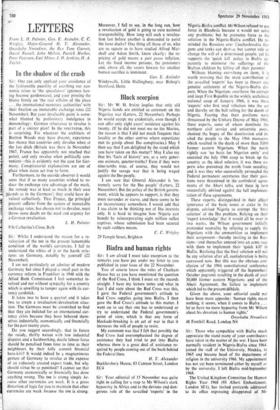 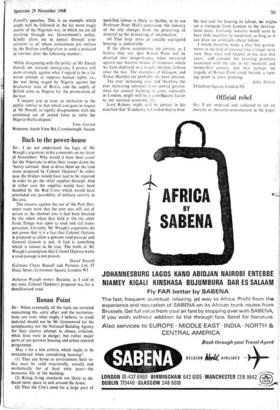 - Sir: Those who sympathise with Biafra much appreciate the

stand many of your contributors have taken in the matter of the war. I have been normally- resident in Nigeria-Biafra since 1964, joined the staff of the University, Nzukka, in 1965 and became head of the department of religion in the university 1966. My appointment has not yet been terminated either by myself or by the university. I left Biafra mid-September 1968.

The United. Kingdom Committee for Human Rights Year 1968 (93 Albert Embankment, London SE1), has invited postcards addressed to its office expressing disapproval of Mr Powell's speeches. This is an example which might well be followed in the far more tragic matter of the Nigerian war, in which we are all involved through ou: Government's policy. Kindly allow me to appeal through your columns to all whose consciences are smitten by the Biafran conflagration to send a postcard to UKCHRY after the following manner:

'While disagreeing with the policy of Mr Enoch Powell, 1■41., towards immigrants, I protest still more strongly against what I regard to be a far worse attempt to suppress human rights, i.e., the war being waged by Nigeria against the breakaway state of Biafra, and the supply of British arms to Nigeria for the prosecution of the war.

'I request you to issue an invitation to the public, similar to that which you gave in respect of Mr Powell, to signify disagreement with the continued use of armed force to settle the Nigeria-Biafra dispute.'