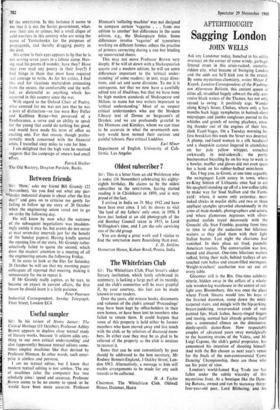 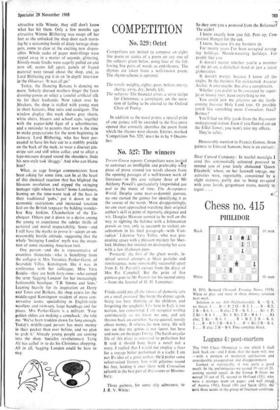 Ask any Londoner today, hunched in his utility overcoat on the corner of some windy, garbage- littered street in this crisis-racked, austerity- ridden city, what became of Swinging London and the odds are he'll kick you in the crutch. By some mysterious chemistry, writes Meyer Z. Kopek, London Correspondent of the Washing- ton Afternoon Bulletin, this ancient queen of cities all, straddled hugely athwart the oily, cor- rosive black waters of the Thames, has not only ceased to swing : it positively sags. Wander along King's Street, Chelsea, where only a few months back leggy nymphettes in buttock-short microjupes and jumbo sunglasses purred to the whistles and growls of roving playboys, coax- ing thunder out of the engines of their low, sleek Facel-Vegas. On a Tuesday morning be- fore breakfast this week the Street was deserted. A plump, red-faced woman in a silk headscarf and a sheepskin carcoat lingered in attendance on her pale yellow whippet, crouched awkwardly in mid-sidewalk: the portly businessman bicycling by on his way to work in a bowler, muffler and gloves did not even spare her a honk on his rubber-bulbed mini-horn.

Go, I beg you, to Grotti, at one time arguably the swingingest Latin eatery in town, where ex-King Simian of Lithuania once had to eat his spaghetti standing up off of a low coffee table to make way for Stud Stallion and the Farm- yard: where, it seems only yesterday, near- naked chicks in muslin shifts and two or three appliqué spangles sprawled abandonedly in the arms of male models, photographers and actors, and where glamorous negresses with silver- painted eyelids toyed decorously with the Gnocchi alla Stan Frimble, pausing from time to time to slap the audacious but hilarious waiters as they plied them with their light Italian banter. Last night the charisma had vanished. In their place sat tired, paunchy American tourists. The conversation was low, muted and discreet. One-time hilarious waiters sulked, biting their nails, behind trolleys of un- touched rum babas and cream-filled meringue.: Weight-watchers' saccharine was set out on every table.

Gloomier still is the Bin. One-time celebrity niterie, hidden away in the cellars of a whole- sale wooden-leg warehouse in the centre of red- light area Bloomsbury, this was once the place where Frank Sinatra would toss his keys to the liveried doorman, romp down the mink- carpeted stairs, and mingle with the hip-jerking, breast-juddering, sweat-soaked crush of red- painted lips, black lashes, heavy-ringed fingers and tossing, scented hair already grinding itself into a communal climax on the diminutive, dimly-spotlit dance-floor. Now respectable couples of advanced years sway nostalgically to the haunting strains of the Valeta, and Mr Luigi Capone, the club's genial proprietor, has announced his intention of shooting himself. And with the Bin chosen as next year's venue for the finals of the non-controversial 'Come Dancing' Championship, there are those who see his point of view.

London's world-famed Rag Trade too has fallen under the subtle wizardry of this mysterious _frost. At a boutique like the Danc- ing Banana, owned and 'run by tearaway thirty - four-year-old peer, Lord Blithering, and his

attractive wife Winnie, they still don't know what has hit them. Only a few months ago attractive Winnie Blithering was swept off her feet as she unlocked the shop door each morn- ing by a screaming horde of dizzy teenage shop- pers, come to claw at the exciting new dispos- ables. Whole racks of paper mini-things were ripped away in a matter of seconds, glittering, flimsily-made frocks were eagerly pulled on and torn off, seams fell apart, panels of frayed material were tossed about the shop, and, as Lord Blithering pu,t it in an 'in depth' interview in the Observer, 'It was all go.'

Today, the Dancing Banana is dancing no more. Soberly dressed mothers finger the fawn dressing-gowns or select a tasteful artificial silk tie for their husbands. Now taken over by Meakers, the shop is staffed with young men in short haircuts, blue suits and cardigans. The window display this week shows grey shorts, white shirts, blazers and school caps, together

with the papier-ache figur of a schoolmaster, and a reminder to parents that now is the time to make preparations for the term beginning in January. Lord Blithering, who has been per- suaded to have his hair cut to a stubbly prickle on the back of the neck, to wear a discreet pin- stripe suit and stiff white collar, and to affect a tape-measure draped round the shoulders, finds his new-style task 'draggy.' And who can blame him?

What, as sage foreign commentators have been asking for some time, can be at the heart .of this chemical reaction that has blighted the blossom revolution and nipped the swinging teenager right where it hurts? Some Londoners, leaning on the time-worn teak of the bars in their traditional 'pubs,' put it down to the economic restrictions and increased taxation laid on the British taxpayer by balding wonder- boy Roy Jenkins, Chamberlain of the Ex- chequer. Others put it down to a desire among the young to experience the subtler thrills of sartorial and moral respectability. Some—and I still have the marks to prove it—adopt an un- reasonably hostile attitude, suggesting that the whole 'Swinging London' myth was the inven- tion of sonic steaming American twit.

One person—and she is representative of countless thousands—who is benefiting from the collapse is Mrs Veronica Parker-Garst, of Scarsdale Villas, Kensington. She it was, in conference with her colleague, Miss Vera Boddie—they are both forty-nine—who coined the term 'Sagging London' for her increasingly fashionable boutique, `T.B. Simms and Sons.' Leaning heavily for its inspiration on Derry and Toms and Barkers, the shop caters for the middle-aged Kensington resident of more con- servative tastes, specialising in English-style woollens and twin-sets, large handbags and fur pieces. Mrs Parker-Garst is a militant. 'Your golden oldies are making a comeback,' she told me. 'We've been trodden down for long enough. Today's middle-aged person has more money in their pocket than ever before, and we plan to grab it.' Already young people are coming into the shop. Socialist revolutionary Tariq Ali has called in to do his Christmas shopping. All in all, Sagging London could be here to stay.