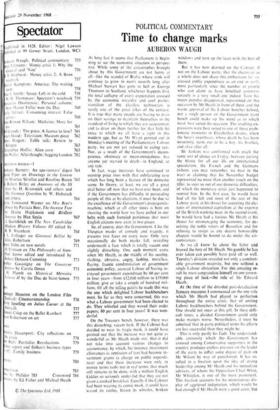 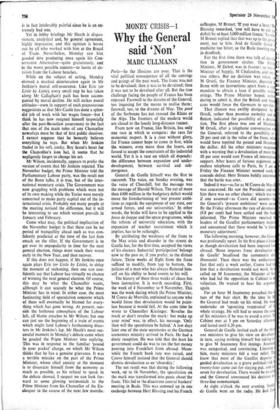 At long last it seems that Parliament is begin- ning to see the economic situation in perspec- tive. While some of the catastrophes brought about by this Government are not funny at all—like the scandal of Biafra whose stink will continue to grow in men's nostrils long after Michael Stewart has gone to hell or George Thomson to Scotland. whichever happens first.

the total collapse of every expectation aroused

surely one of the great jokes of the century. It is true that many people are having to draw on their savings to maintain themselves in the standard of living to which they are accustomed. and to draw on them further for that little bit extra to which we all have a right in this modern age, but as Mr Wyatt pointed out in Monday's meeting of the Parliamentary Labour party, we are not yet reduced to eating rats. Nor, as a result of the Government's incom- petence, obstinacy or mean-mindedness. has anyone yet starved to death—in England, at any rate.

In fact, wage increases have continued to outstrip price rises with that exhilarating ease which has long been a feature of the domestic scene. In theory, at least, we are all a great deal better off now that we have ever been, and if the Government has difficulty in persuading people of this at by-elections, it must be due to the excellence of the Government's propaganda- machine, which at all other times is bent on showing the world how we have pulled in our belts with such frenzied patriotism that most English citizens now exist in two pieces.

So, of course, does the Government. Like the Thespian masks of comedy and tragedy, it presents two faces on every issue. Only very occasionally do both masks fall, revealing underneath a face which is totally vacant and slightly disturbing. One such moment came when Mr Heath, in the middle of his searing. slashing. abrasive, angry, lashing. merciless, flaying, frantic condemnation of government economic policy, accused Labour of having in- creased government expenditure by 60 per cent in four years—from £12,000 million to £19,000 million. give or take a couple of hundred mil- lions. Of all the telling points he made this was the one which delighted Labour backbenchers most. So far as they were concerned, this was what a Labour government had been elected to do. They whistled and they waved their order papers; 60 per cent in four years! It was won- derful.

On the Treasury bench, however, there was this disturbing, vacant look. If the Cabinet had decided to wear its tragic mask, it could have painted out that the increase was not quite as wonderful as Mr Heath made out; that-it did not take into account various changes in accountancy, by which, for instance, investment allowances (a remission of tax) had become in- vestment grants (a charge on public expendi- ture) and that these increases were only in money terms (sob) not in real terms; that much still remains to be done, with a million English kiddies so seriously under-fed that they are not given a cooked breakfast. Equally if the Cabinet had been wearing its comic mask, it could have waved its rattles, blown its whistles, broken windows and torn up the ;eats with the best of them.

But it has now dawned on the Cabinet, if not on the Labour party, that the electorate as a whole does not share this enthusiasm for in- creased public expenditure as an end in itself, most particularly since the number of people who can claim to have benefited commen- surately is a very small one indeed. Torn be- tween popular disapproval, represented on this occasion by Mr Heath in front of them, and the warm approval of the Labour benches behind, not a single person on the Government front bench could make up his mind as to which mask best suited the occasion. The resulting ex- pressions were best suited to one of those prob- lematic moments in Elizabethan drama, when the hero's sweetheart. whose death he has been mourning, turns out to be a boy. his brother, and ;disc after all.

Mr Jenkins was confronted with much the same sort of choice on Friday, between putting the blame for all our ills on international speculation, the French and the Germans (whom, you. may remember, we beat in the war) or claiming that his November budget represented no more than another touch on the tiller, to steer us out of our domestic difficulties, of which the monetary crisis just happened to remind him. In the first case, he would have had all the left and most of the rest of the Labour party at his throat for accepting the dic- tates of international capitalism at the expense of the British working man; in the second event, he would have had a furious Mr Heath at his throat for mismanaging the economy, for de- ceiving the noble voters of Bassetlaw and for refusing to resign as any decent honourable chappie would be bound to do under the cir- cumstances.

As we all know he chose the latter and braved the fury of Mr Heath. No gamble he has ever taken can possibly have paid off so well. Tuesday's division revealed not only a comfort- able government majority, but one without a single Labour abstention. For this amazing re- sult he must congratulate himself on one crown- ing piece of luck—the role of Mr Edward Heath.

At the time of the dreaded post-devaluation January measures I commented on the one role which Mr Heath had played to perfection throughout the entire crisis, that of uniting Labour backbenchers behind the Government. One should not sneer at this gift. In these diffi- cult times, a divided Government could only make matters worse. Nevertheless, it must be admitted that in party-political terms his efforts are less successful than they might be.

This is only partly his fault. The understand- able animosity which the- Government has aroused among Conservative supporters in the country produces endless pressure on the leader of the party to inflict some degree of pain on Mr Wilson by way of punishment. It has re- sulted in a fixation upon the idea of strong leadership among Mr Heath and his immediate advisers. of whom the Opposition Chief Whip, Mr Whitelaw, is one of the most prominent. This fixation accounts for his monotonous dis- play of aggrieved indignation, which would be bad enough if Mr Heath were a good actor, but is in fact intolerably painful since he is an ex- tremely bad one.

Yet in lobby briefings Mr Heath is dispas- sionate, analytical and, by general agreement, highly impressive, and this opinion is borne out by all who worked with him at the Board of Trade. Nevertheless, Monday saw him goaded into producing once again his Con- servative Alternative—quite gratuitously, and in the worst possible context—to hoots of de- rision from the Labour beaches_ While on the subject of acting, Monday showed a marked deterioration again in Mr Jenkins's moral self-assurance Like Eric (or Little by Little), every small step he has taken along Mr Callaghan's path has been accom- panied by moral decline. He still strikes moral attitudes—even in support of such preposterous aap,geoions as that Mrs Castle has done a splen- did job of work with her wages freeze—but I think he has now resigned himself (especially after the post-Bassetlaw assurances) to the fact that one of the main roles of any Chancellor nowadays must be that of first public deceiver. I cannot suppose that he, honestly believes everything he says_ But when Mr Jenkins traded in his soft, cocky, Boy Scout's beret for the Chancellor's iron hat, it. seems that he negligently forgot to change his act.

Mr Wilson, incidentally, appears to prefer the version of events that Mr Jenkins rejected. The November budget, the Prime Minister told the Parliamentary Labour party, was the result not of the Bonn talks, it is true, but of the inter- national monetary crisis. The Government was now grappling with problems which were not of its own making while the Tories were merely concerned to make party capital out of the in- ternational crisis. Probably not many people at the meeting noticed the difference, but it will be interesting to see which version prevails in January and February.

Come what may, the political implication of the November budget is that there can be no period of tranquillity ahead such as was con- fidently predicted at the time of the last firm smack on the tiller. If the Government is to get over its unpopularity in time for the next general election, things must reach their worst early in the New Year, and then recover.

If this does not happen, if Mr Jenkins once again plays Eric (or Little by Little), to delay the moment of reckoning, then one can con- fidently say that Labour has virtually no chance of winning the next general election. Of course, this may be what the Chancellor wants, although it can scarcely be what the Prime Minister has in mind. In either case, the most fascinating field of speculation concerns which of them will eventually be blamed for every- thing which has gone wrong. At present, out- aide the hothouse atmosphere of the Labour left, all blame attaches to Mr Wilson; but one can just see the beginning of a train of events which might land Labour's forthcoming disas- ters in Mr Jenkins's lap. Mr Heath's most suc- cessful moment in Monday's debate came when he goaded the Prime Minister into replying. This was in response to the familiar 'pound in your pocket' charge, on which Mr Wilson- thinks that he has a genuine grievance. It was a terrible mistake on the part of the Prime Minister, whose chief anxiety at the moment is to dissociate himself from the economy as much as possible, as his refusal to speak in the debate showed. I suspect we can look for- ward to some glowing testimonials to the Prime Minister from his Chancellor of the Ex- chequer in the course of the next few months.: