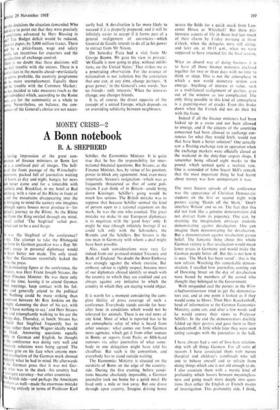 Why the General said 'Non'

Paris—So the illusions are over. That is the vital political consequence of all the comings and goings of the past week. The franc was not to be devalued; then. it was to be devalued; then it was not to be devalued after all. But the true challenge facing the people of France has been exposed. Farewell to the dreams of the General, too imposing for the means to realise them: farewell, too, to the dreams of May. The paid of the Sorbonne has not crossed the Rhine or the Alps. The frontiers of the modern world are closed to the lonely long-distance runner.

From now on France, like Britain, has only one race in which to compete: the race for economic respect. It is a race without glory, for France cannot hope to come in first, while the winners, even more than the losers, are forced to accept the constraints of the industrial world. Yet it is a race on which all depends: the difference between expansion and under- development, between survival and sub- mergence.

General de Gaulle himself was the first to succumb. The voice, on Sunday evening, was the voice of Churchill, but the message was the message of Harold Wilson. The cut of more than £400 million in the budgetary deficit would mean the foreshortening of 'our present ambi- tions as regards the equipment of our state, our armed forces, and our universities.' In other words, the brake will have to be applied to the force de frappe and the space programme, while the reform of university education, with the expansion of teacher recruitment which it implies, has to be rethought.

By attributing the weakness of the franc to the May crisis and disorder in the streets de Gaulle has, for the first time, accepted the views of his electors. Industrial 'participation' belongs now to the past or, if you prefer, to the distant future. Three weeks of flight from the franc sufficed to modify, from top to bottom, the policies of a man who has always flattered him- self on his ability to bend events to his will.

The history of these three weeks of chaos has been instructive. It is worth recording. First, the week of 4 November to 9 November. This was the week during which the Prime Minister„ M Couve de Murville, explained to anyone who would listen that devaluation would be point- less because it would fail. At the same time he wrote to Chancellor Kiesinger. 'Revalue the mark or don't revalue the mark : but make up your mind' was, in effect, his message. 'Only then will the speculation be halted.' A few days later one of the state secretaries at the German economics ministry arrived in Paris. He had a dusty reception. He was told that the least his government could do was to tax the hot money pouring into Frankfurt from abroad. Mean- while the French bank rate was raised, and Couve himself insisted that the General should dismiss devaluation as an 'absurdity.'

The net result was that during the following week, up to 16 November, the speculation on the mark was transformed into panic about the franc. This led to the disastrous central bankers' meeting in Basle. This was summed up in • one exchange between Herr Blessing and his French, co/league, M Brunet. `If you want a loan,' n Blessing remarked, 'you will have M cut yo deficit by at least 5,000 million francs.' To whi M Brunet replied that that was up to the govt ment, not to him. And de Gaulle found medicine too bitter, so the Basle meeting en in deadlock.

For the first time there was talk of deva Lion in government circles. The Fore Minister, M Debt* was in favour: so was Minister of Supply, M Chalandon, and one two others. But no decision was taken, a M Ortoli, the Finance Minister, departed Bonn with no instructions apart from a va mandate to obtain a loan if possible with; strings. The Prime Minister hoped, with; daring to admit it, that the British and Arne cans would force the Germans to upvalue.

That illusion was swiftly dissipated. So Ortai, rather than promise austerity and Dation, indicated the possibility of a devalu tion. The first phase was one of blackma M Ortoli, after a telephone conversation w the General, referred to the possibility of 20 per cent cut in the value of the franc, wh would have toppled the pound and threaten the dollar. All the other ministers respond with a warning that a devaluation of more th 10 per cent would cost France all intemation support. After hours of furious argument, a endless telephone calls to Paris, by 3 am Friday the Finance Minister seemed ready concede defeat. Herr Strauss boldly announ that the battle was over.

Indeed it was—as far as M Couve de Mury was concerned. He saw the President and to him there was no other choice: which was t if one assumed—as Couve did assume—th the General's 'present ambitions' were sac By the Friday afternoon the rate of devaluau (9.8 per cent) had been settled and the ban informed. The Prime Minister received t leaders of the Gaullist parliamentary majori and announced that there would be 'a limit monetary adjustment.'

The following morning, however, the Gene was profoundly upset. In the first place it look as though devaluation had been imposed fro abroad. 'Bonn imposes franc devaluation de Gaulle' headlined the communist dal Humanite. Then there was the embarras,i fact that only a week earlier, Couve had t him that a devaluation would not work. So called up M Jeanneney, the Minister of Ste who had led the opposition in Cabinet to valuation. He wanted to hear his argumen again.

For an hour M Jeanneney preached the tues of the hair shirt. By the time he I the General had made up his mind. He wo undertake an 'agonising reappraisal' of whole strategy.. He still had to secure the asse of his ministers if he was to avoid a crisis. Cabinet met at 3 pm on Saturday afternoo and lasted until 6.20 pm.

General de Gaulle invited each of the th one ministers to give his view on devaluat in turn, saying nothing himself but taking to give M Jeanneney first innings. Jeanne was categorical, and convincing. Listening hini, many ministers felt a vast relief. knew that most of the Gaullist deputies r garded devaluation as a grave political risk. twenty-four came out for staying put, and 0 seven for devaluation. There would be no cri and the General announced his decision 10 three-line communiqise. At eight o'clock the next evening, Sunda de Gaulle went on. the radio. He had fr n the decisions the situation demanded. Who dare to point out that they were precisely conditions advanced by Herr Blessing in ? The Budget deficit would be reduced, least on paper, by 5,000 million francs. There lei be a price-freeze, wage and salary rols, tax incentives for exporters and the croduction of exchange control. re is no doubt that these decisions will real trouble with the unions. There is a of strikes in the months ahead—particularly as seems probable, the austerity programme to more unemployment. Equally there be trouble with the Common Market: has decided to take measures (such as the rt subsidies) which, according to the Rome 1%. are for the community as a whole to rove. Nevertheless, on balance, the con- awes of the General's choice are not neces- sarily bad. A devaluation is far more likely to succeed if it is properly prepared; and it will be infinitely easier to accept if it forms part of a general realignment of currencies—which General de Gaulle intends to do all in his power to extract from Mr Nixon.

On Saturday Paris had a visit from Mr George Brown. He gave his view in private: 'de Gaulle is now going to play, without inhibi- tions, on the United States.' That strikes me as a penetrating observation. For the essence of nationalism is not isolation but the conviction that one can, at any time, change partners. 'A great power,' in the General's own words, 'has no friends: only interests.' When the interests change, one changes friends.

It is, of course, the direct opposite of the concept of a united Europe, which depends on an overriding solidarity between neighbours.