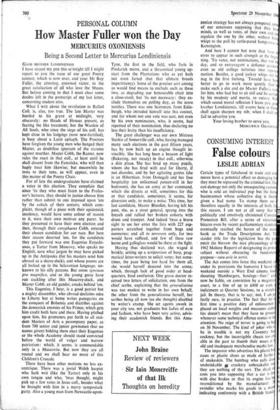 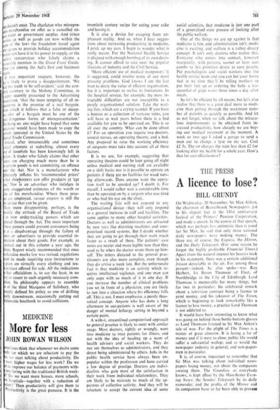 Certain types of falsehood in trade and co merce have a potential effect so damaging th they must be repressed by the criminal law. The can damage not only the unsuspecting custo who is sold an individual pup but the hon businessman whose collective dog is there given a bad name. To stamp them out therefore equally in the interests of both. F' this reason, I am not at all sorry that politically and emotively christened Consum. Protection Bill, after a series of vicissitu bizarre even by recent parliamentary standars. eventually reached the haven of the statu book as the Trade Descriptions Act. staider title for the legislation has the gre merit (fo borrow the nice phraseology of t. 1962 Molony Report) of designating its prima subject without obscuring its fundament purpose—rara avis in terris.

The Act comes into force this weekend: a under its provisions the humorist I heard I. weekend outside a West End cinema lo shouting 'Hamburgers, hotdogs—free r co now be liable, on conviction by a magistrat court, to a fine of up to £400 or even, indictment at Quarter Sessions, to a stretch jail. In theory, that is to say; not, I am fectly sure, in practice. The fact that for first time a positive duty of enforcement placed on local weights and measures autho ties doesn't mean that they have to prosec whenever some technical offence comes tot attention. No reign of terror is going to be on 30 November. The kind of joker who u be in trouble is not my Coventry St cockney, but the incorrigible cheats too 0 able in the past to thumb their noses at old and inadequate merchandise marks laws.

The impostor who advertises his plastic b cases or plastic shoes as made of leather of snakeskin. The humbug who calls dr unshrinkable ar crockery unbreakable * they are nothing of the sort. The shark * cons you into supposing that a car is fit with disc brakes or that its engine has reconditioned by the manufacturer. swindler who marks his goods in a man indicating conformity with a British Stan'

t doesn't exist. The charlatan who misrepre- ts merchandise on offer as a cancelled ex- it order or government surplus. And (since ices as well as goods are now within the pe of the law) the fraudulent travel agent agrees to provide holiday accommodation does not have it in his power to supply, or the less restaurateur who falsely claims a curable mention in the Good Food Guide.

ese are among the Act's first and foremost rgetS. In two important respects, however, the cl is likely to prove a disappointment. 'We Id this truth to be self-evident,' said the erst- we secretary to the Molony Committee, in paper recently presented to the Advertising iation, 'that the most tempting of all in- ments is the promise of a real bargain. rom which it follows that a false or decep- offer of a bargain must be one of the t dangerous forms of misrepresentation.' is being so. one might have hoped that some avour would have been made to copy the roll operated in the United States by the eral Trade Commission.

Instead, after innumerable and sometimes rcical attempts at redrafting, almost every ind of loophole has been knowingly left in law. A trader who falsely claims that other ders are charging much more than he is certain goods is not committing an offence r the Act. Nor is a manufacturer who liberately inflates his 'recommended prices' that shopkeepers can offer products at `cpt es.' Nor is an advertiser who indulges in sly exaggerated estimates of the worth or e of his merchandise. Where these prac- s are employed, caveat emptor is still the ly advice that can be given.

Even more disappointing, perhaps, is the ently shy attitude of the Board of Trade its new order-making powers which are tered through the Act. The most important these powers could prevent consumers being at a disadvantage through the failure of ders or advertisers to provide essential in- ation about their goods. For example, as pointed out in this column a year ago, the lony Report wisely recommended that once rchandise marks law was revised, regulations Id be made requiring care instructions to given on virtually every clothing and tex- product offered for sale. All the indications that officialdom is, to say the least, in no ry to resort to such urgently necessary corn- ion. Its philosophy appears to resemble

t of the third Marquess of Salisbury, who utedly defined his policy as one of drifting dily downstream, occasionally putting out iplomatic boathook to avoid collisions.