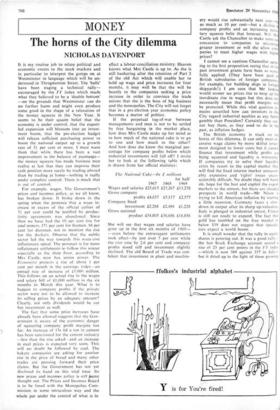 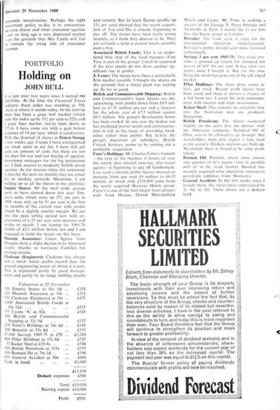 MONEY The horns of the City dilemma

in particular to interpret the goings on at Westminster in language which will be un- derstood in Throgmorton Street. The 'bulls'

have been staging a technical rally—

encouraged by the FT index which made what they believed to be a 'double bottom' —on the grounds that Westminster can do no further harm and might even produce some good in the shape of a relaxation of the money squeeze in the New Year. It seems to be their quaint belief that the economy is under control, that the export- led expansion will blossom into an invest- ment boom, that the pre-election budget will release sufficient purchasing power to

boost the national output up to a growth rate of 31 per cent or more. I must warn them that while there has been a vast improvement in the balance of payments—

the money squeeze has made business men realise at last that they can improve their cash position more surely by trading abroad than by trading at home—nothing is really under complete control. There is much that is out of control.

For example, wages. The Government's prices and incomes policy, as we all know, has broken down. It broke down in the spring when the pretence that a wage in- crease in excess of the official ceiling of 3+ per cent could be justified by produc- tivity agreements was abandoned. Since then we have had the 10 per cent rise for coal miners, 171 per cent for firemen, 16 per cent for dustmen, not to mention the rise for the dockers. Observe that the public sector led the way towards this wage-cost inflationary spiral. The prospect is for more inflationary settlements to follow this winter especially as the shop floor, according to Mrs Castle, snow has union power. The Economist proiects a rise of about 1 per cent per month in the earnings index—an annual rate of increase of £3.000 million. This follows on an actual rise in the wages and salary bill of £1,000 million in the six months to March this year. What is to happen to company profits if the private sector were not to be allowed to increase its selling prices by an adequate amount? Clearly, not only dividends would be cut but investment as well.

The fact that some price increases have already been allowed suggests that the Gov- ernment is aware of the economic danger of squeezing company profit margins too far. An increase of 13s 6d a ton in cement has been sanctioned for the cement industry —less than the rise asked—and an increase in steel prices is expected very soon. This will no doubt be followed by coal. The bakery companies are asking for another rise in the price of bread and many other trades are pressing forward their price claims. But the Government has not yet disclosed its hand on this vital issue. Its new prices and incomes policy is still being thought out. The Prices and Incomes Board is to be fused with the Monopolies Com- mission in some miraculous way and the whole put under the control of what is in effect a labour-conciliation ministry. Heaven knows what Mrs Castle is up to. As she is still hankering after the retention of Part 2 of the old Act which will enable her to hold up wage and price increases for four months, it may well be that she will be beastly to the companies seeking a price increase in order to convince the trade unions that she is the boss of big business and the monopolies. The City will not forget that in a pre-election year economic policy becomes a matter of politics.

She will see that wages and salaries have gone up in the first six months of 1969- -even before the extravagant settlements took effect—by just over 5 per cent while the GNP rose by 2.6 per cent and company profits stood still and investment slightly declined. The old Board of Trade was con- fident that investment in plant and machin- ery would rise substantially next year-4 as much as 10 per cent—but a decline company profits and an increasing mone tary squeeze belie that forecast. Will Mr Castle ask the Chancellor to make some ta concession to companies to encourag greater investment or will she allow com panies to meet higher wages with high. prices?

I cannot see a cautious Chancellor agree ing to the first proposition seeing that in th past investment grants have been so waste- fully applied. (They have been paid to British subsidiaries of foreign companies, for example, for building ships in foreign shipyards!) I am sure that Mr Jenkins would sooner see prices rise to mop up the inordinate rise in wages but this does not necessarily mean that profit margins will be protected. While this vital question re- mains unsettled how can investors in the City regard industrial equities as any better gamble than Poseidon? Certainly they can- not buy them, as they used to do in the past, as inflation hedges.

The British economy is stuck on the horns of this dilemma. It can only meet ex- cessive wage claims by more skilful invest- ment designed to lower costs but it cannot finance that investment while profits ale being squeezed and liquidity is worsening. If companies try to solve their liquidity crisis by resort to the capital market they will find the fixed interest market unreason- ably expensive and 'rights' issues uncon- scionably difficult. No doubt they will battle on, hope for the best and exploit the export markets to the utmost, but there are clouded prospects in world trade—Mr Nixon is trying to kill American inflation by starting a little recession, Germany faces a slow- down in output after its sharp up-valuation, Italy is plunged in industrial unrest, France is still not ready to expand. The fact that gold has tumbled on the free market to below $39 does not suggest that specula- tors expect a world boom.

It is small wonder that the rally in equity shares is petering out. It was a good rally— the last Stock Exchange account scored a rise of 23 per cent points in the FT index —which is now 389 against 357 in July— but it dried up in the light of these growing

Y is for You're fired! economic uncertainties. Perhaps the right investment policy to-day is to concentrate on store shares and other consumer equities —not so long ago a very depressed market

on the grounds that Mrs Castle will fail to restrain the rising tide of consumer incomes.