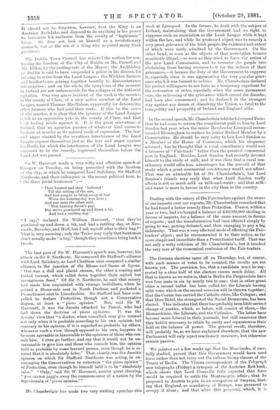 Page 2, 29 October 1881 — The Dublin Town Council has rejected the motion for con-
Close

The Dublin Town Council has rejected the motion for con-

ferring the freedom of the City of Dublin on Mr. Parnell and Mr. Dillon, by the casting-vote of the Mayor ; the Archbishop of Dublin is said to have suspended a priest in his diocese, for ref:;sing to retire from the Land League ; the Wicklow farmers and landlords are joining together heartily to discountenance intimidation ; and on the whole, the symptoms of the moment in Ireland are not unfavourable for the collapse of the anti-rent agitation. One very grave incident of the week is the murder. in the county of Clare, of a very active member of the Land League, named Thomas MacMahon, apparently for denouncing other farmers who had paid their rents. If this be the cause of the murder, it is clear that the tyranny of the Land League is felt as an oppressive yoke in the county of Clare, and that lal feeling rebels against it. It is the great misfortune of lrelaud, that no agrarian passion of whatever kind seems to hesitate at murder as its natural mode of expression. The fear and anger created by the vexatious interference of the Land League express themselves just as the fear and anger against landlords, for which the interference of the Land League was supposed to be the remedy, expressed themselves before the Laud Act was passed.