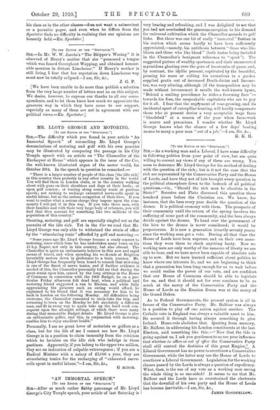 ITO THE EDITOR OF THE " SPECTATOR.1 SIR—After so much rather flabby patronage of Mr. Lloyd George's City Temple speech, your article of last Saturday is

very bracing and refreshing, and I was delighted to see that you had not overlooked the generous exception to his demand for universal cultivation which the Chancellor accords to golf links. But there was one bit of really " immortal " fustian in Ins oration which seems hardly to have been sufficiently appreciated,—namely, his antithesis between "those who like bloom and those who like blood" (both tastes being included in the Chancellor's benignant reference to "sport"). The suggested picture of wealthy sportsmen and their unconverted myrmidons gloating over the gore of hecatombs of game, and, by contrast, the idyllic peasant, captivated by the beautiful, pruning his roses or culling his carnations in a garden supplied gratis out of increased Death-duties and Income- tax, was very alluring, although (if the transposition may be made without irreverence) it recalls the well-known hymn, "Behind a smiling providence he hides a frowning face "- towards his foes, the unspeakable capitalists who are to pay for it all. I fear that, the enjoyment of rose-growing, and its incidental sport of caterpillar-hunting, will hardly compensate those who at present derive a very acceptable wage from "bloodshed" at a season of the year when farm-work is scarce and precarious. I wonder whether Mr. Lloyd George knows what the chance of a few days' beating meats to many a poor man "out of a job."—I am, Sir, &c.,