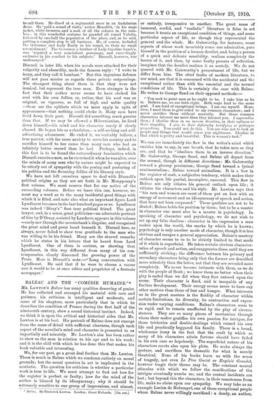 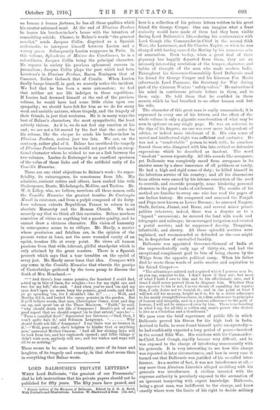 BALZAC AND THE " COMEDIE HIIIIAINE."* Mn. LAWTON'S Balzac has

many qualities deserving of praise. He has collected and arranged his material with care and patience, his criticism is intelligent and moderate, and some of his chapters, more particularly that in which he describes the condition of France during the first half of the nineteenth century, show a sound historical instinct. Indeed, we think it is upon the critical and historical sides that Mr. Lawton is at his best. His portrait of Balzac does not emerge from the mass of detail with sufficient clearness, though each aspect of the novelist's mind and character is presented to us impartially and minutely. Mr. Lawton's aim has been rather to show us the man in relation to his age and to his work ; and it is the skill with which he has done this that makes his book valuable and interesting.

We, for our part, go a great deal further than Mr. Lawton. There is much in Balzac which we condemn entirely on moral grounds; but the moral question in art is implicated in the aesthetic. The question for criticism is whether a particular work is true to life. We must attempt to find out how far the register is perfect or faulty; how far the mind of the author is biassed by its idiosyncrasy; why it should be extremely sensitive to one group of impressions, and almost,

• Bat sac. By Frederick Lawton. London: Grant Richards. [16s. net.] or entirely, irresponsive to another. The great mass of immoral, sordid, and " realistic " literature is false in art because it treats an exceptional condition of things, and some particular aspect of life, as though they represented the general and the whole. Mr. Galsworthy, for instance, some aspects of whose work invariably rouse our admiration, puts himself in the position of a human derelict, and, being a person of a quick and delicate sensibility, realises completely the horror of it, and then, by some faulty process of reflection, imagines that the derelict realises it as acutely. We do not quarrel with Mr. Galsworthy's presentment of life, but we differ from him. The chief faults of modern literature, to our mind, are that it is concerned with the accidental and the exceptional rather than with the essential and the normal conditions of life. This is certainly the case with Balzac. He writes to George Sand on their opposed methods:—

" You seek to paint man as he ought to be. I take him as he is. Believe me, we are both right. Both ways lead to the same goal. I am fond of exceptional beings. I am one myself. More- over, I need them to give relief to my common characters ; and I never sacrifice them without necessity. But these common characters interest me more than they interest you. I aggrandize them ; I idealize them in an inverse direction, in their ugliness or their stupidity. I give to their deformity terrifying or grotesque proportions. You could not do this. You are wise not to look at people and things that would cause you nightmare. Idealize in that which is pretty and beautiful. This is woman's task."

We can see immediately the flaw in the writer's mind which enables him to say, in one breath, that he takes men as they are, and that he "idealizes them in an inverse direction." Mr. Galsworthy, George Sand, and Balzac all depart from the normal, though in different directions : Mr. Galsworthy toward a gloomy pessimism ; George Sand toward a lyrical sentimentalism ; Balzac toward animalism. It is a flaw in

energy of movement and an idiosyncrasy of speech and action, that have not been surpassed." These qualities are not to be denied; Balzac holds his position by them; but to be a master in character one must also be a master in psychology. In

speaking of character and psychology, we do not wish to set up any false dualism : character is the impression a man makes upon the world, the marks by which he is known ; psychology is only another mode of character, though it is less obvious and escapes a general appreciation. Balzac's mastery of character seems to us to be strictly limited to that mode of it which is superficial. He takes certain obvious character- istics of speech and action, and exaggerates them until they are sufficiently striking ; the difference between his primary and secondary characters being only that the former are described more minutely than the latter, not that they are revealed more completely. We never become intimate with them, as we do with the people of Scott ; we know them no better when their play is ended than we did when they first entered upon the scene. Their character is fixed, and is incapable of any further development. Their energy seems never to have any other motives than those of lust and hunger. What interests us in the great masters is the fluidity of character within certain limitations, its diversity, its contraction and expan- sion under varying conditions. Balzac's characters seem to us rigid, and to remain unaffected by the play of circum- stances. They are so many pieces of mechanism through whom their maker gratifies his own passion for intrigue, for those trickeries and double-dealings which ruined his own life and practically beggared his family. There is a broad, wholesome irony in the fact that the craft by which so many of his characters attain fortune should have failed

in his own case so hopelessly. The superficial nature of his characters reacts also upon his plots. He seeks always the gesture, and sacrifices the dramatic for what is merely theatrical. None of his books leave us with the sense

of tragedy, not even Le Pere Goriot or Eugenie Grandet, however tragic their theme may be. The constant mental stimulus with which we follow the ramifications of the intrigue eventually numbs us; and the central incidents are lost ; but beyond this the characters, in their remoteness from life, make no claim upon our sympathy. We may take as an example Lucien de Rubempre, one of those exceptional people whom Balzac never willingly sacrificed : a dandy, an author, un, hontme a bonnes fortunes, he has all those qualities which his creator esteemed most. At the end of Illusions Perdues he leaves his brother-in-law's house with the intention of committing suicide. Chance, in Balzac's words "the greatest novelist," sends Jacques Collin, disguised as a Spanish ecclesiastic, to interpose himself between Lucien and a watery grave. Subsequently Lucien reappears in Paris. In this volume, Splendeurs et lifiseres des Courtisanes, be is a subordinate, Jacques Collin being the principal character.

He repeats in society his previous ephemeral success in journalism ; Jacques Collin plays the part which had been Lousteau's in Illusions Perdues, Baron Nucingen that of Camusot, Esther Gobseck that of Coralie. When Lucien finally bangs himself, in gaol, we scarcely notice the incident.

We feel that he has been a mere automaton ; we feel that neither art nor life indulges in these repetitions.

If Lucien had drowned himself at the end of the previous volume, he would have had some little claim upon our sympathy; we should have felt for him as we do for many weak and amiable natures, whose tragedy, and the tragedy of their friends, is just that weakness. He is in many ways the best of Balzac's characters, the most sympathetic, the least actively vicious. As it is, we do not feel any emotion at his end; we are not a bit moved by the fact that the order for his release, like the cheque be sends his brother-in-law in Illusions Perdues, arrives just too late. We are, on the contrary, rather glad of it. Balzac has sacrificed the tragedy of Illusions Perdues because be would not part with an excep- tional character whom he wished to use as a link between the two volumes. Lucien de Rubempre is an excellent specimen of the value of these links and of the artificial unity of La Comedic Humaine.

These are our chief objections to Balzac's work : its super- ficiality, its extravagance, its remoteness from life. His admirers, eminent critics and others, have ranked him with Shakespeare, Dante, Michelangelo, Moliere, and Tacitus. Mr.

W. S. Lilley, who, we believe, mentions all these names, calls the Conddie Humaine the greatest treatise De Contemptu lifundi in existence, and from a pulpit composed of its forty- four volumes exhorts Republican France to return to an absolute Monarchy and the Roman Church. We need scarcely say that we think all this excessive. Balzac nowhere conceives of virtue as anything but a passive quality, and he cannot draw a virtuous character. His vision of humanity in consequence seems to us oblique. Mr. Hardy, a master whose pessimism and fatalism are, in the opinion of the present writer at least, not the mere wounded vanity of an egoist, touches life at every point. He views all human passions from that wide, tolerant, pitiful standpoint which is only attained by the great masters. There is a Spanish proverb which says that a tear trembles on the eyelid of every jest. Mr. Hardy never loses that idea. Compare with any scene in the Comedic Hurnaine that wherein the gossips of Casterbridge gathered by the town pump to discuss the death of Mrs. Henchard :—

"And there's four ounce pennies, the heaviest I could find, a-tied up in bits of linen, for weights—two for my right eye and two for my left," she said. "And when you've used 'em and my eyes don't open no more, bury the pennies, good souls, and don't

ye go spending 'em, for I shouldn't like it." Well, and Martha did it, and buried the ounce pennies in the garden. But if ye'll believe words, that man, Christopher Coney, went and dug em up, and spent 'em at the Three Mariners. "Faith," he said, "why should death rob life o' fonrpence ? Death's not of such good report that we should respect 'en to that extent," says he.'— "Twas a cannibal deed !' deprecated her listeners.—' Grad, then, I

won't quite ha'e it,' said Solomon Longways. Why should death rob life o' fourpence ? I say there was no treason in

Well, poor soul; she's helpless to hinder that or anything now,' answered Mother Ctucsom. And all her shining keys will be took from her, and her cupboards opened ; and Mlle things a' didn't wish seen, anybody will see ; and her wishes and ways will all be as nothing:"

There seems to be more of humanity, more of its tears and laughter, of its tragedy and comedy, in that short scene than in everything that Balzac wrote.