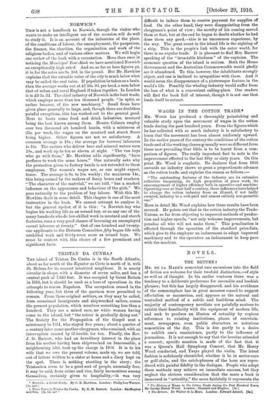 THE island of Tristan Da Cunha is in the South Atlantic, about as far south of the Equator as Crete is north of it, with St. Helena for its nearest inhabited neighbour. It is nearly 'circular in shape, with a diameter of seven miles, and has a central peak of 7,640 feet. It was occupied by Great Britain in 1816, lest it should be used as a base of operations in the attempts to rescue Napoleon. The occupation ceased in the following year, but three of the garrison were permitted to remain. From these original settlers, as they may be called, from occasional immigrants and shipwrecked sailors, comes the present population, which numbers something less than a hundred. They are a mixed race, no white woman having come to the island, but "the colour is gradually dying out." The Society for the Propagation of the Gospel sent a missionary in 1851, who stayed five years ; about a quarter of a century later came another clergyman, who remained, with an interruption caused by ill-health, for ten. Finally, the Rev. ..J. G. Barrow, who had an hereditary interest in the place from his mother having been shipwrecked on Inaccessible, a neighbouring islet, took up the charge in 1906. It is to his wife that we owe the present volume, made up, we are told, out of letters written to a sister at home and a diary kept on the spot. There is nothing startling in the story ; the Tristanites seem to be a good sort of people, unusually free, it may be said, from crime and vice, fairly harmonious among themselves, certainly given to hospitality,—it was very

difficult to induce them to receive payment for supplies of food. On the other hand, they were disappointing from the clergyman's point of view ; the novelty of his coming moved them at first, but at the end he began to doubt whether he bad done them any good,—this is no uncommon experience, by the way. The great event in the island life is the sighting of a ship. This is the people's link with the outer world, for there is no regular trade. It is pleasant to find Mrs. Barrow speaking of the "invariable kindness" of the captains. The economic question of the island is serious. Both the Home Government and the Australian Commonwealth would gladly see it abandoned. To this, however, the inhabitants strongly object, and one is inclined to sympathise with them. And it would mean the disappearance of a picturesque feature in the world's life. Possibly the whaling industry would suffer from the loss of what is a convenient calling-place. Our readers will find the book full of interest, though it is not one that lends itself to extract.