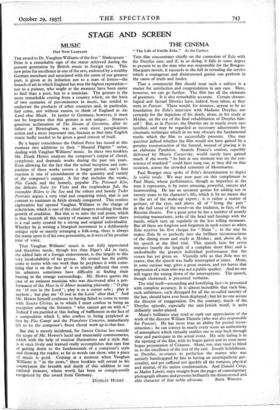 " The Life of Emile Zola." At the Carlton Tins film concentrates chiefly on the connexion of Zola with the Dreyfus case, and if in so doing, it fails in some degree to present to us the man who was responsible for the Rougon- Macquart novels, it succeeds to the full in revealing the service which a courageous and disinterested genius can perform in the cause of truth and justice.

That a commercial film should treat such a subject is a matter for satisfaction and congratulation in any case. Here, however, we can go further. The film has all the elements of greatness. It is also remarkably accurate. Certain chrono- logical and factual liberties have, indeed, been taken, as they were in Pasteur. There would, for instance, appear to be no foundation for Zola's interview with Madame Dreyfus, nor certainly for the depiction Of his death, alone, in his study at Medan, on the eve of the final rehabilitation of Dreyfus him- self ! But, as in Pasteur, the liberties are in nearly every case justified, and may be regarded as necessary adjustments for cinematic technique which in no way obscure the fundamental truths which the film so successfully • presents. One may question indeed whether, the film would not have gained by a genuine reconstruction of the funeral, instead of placing it in an elaborate Pantheon. Anatole France's oration, superbly delivered by Morris Camovsky, would surely have gained much if the words " In him at one moment was set the con- science of mankind " could have rung out, as they did on that occasion, across the crowded cemetery of Montmartre.

Paul Bourget once spoke of Zola's determination to depict la realite totale. We may now pass on this compliment to Paul Muni, whose performance, though as imperfect as the man it represents, is by turns amusing, powerful, sincere and heartrending. He has an uncanny genius for adding ten or twenty years to his character's life, which is by no means due to the art of the make-up expert it. is rather a matter of gesture, of the eyes, and above all of " living the part " in the full Sense of the word—in the tradition, in fact, of the Russian theatre. For a great actor he has a number of acutely irritating mannerisms, jerks of the head and fussirigs with the hands, which turn up regularly in the less telling moments. But all these are forgiven and forgotten in such scenes as when Zola receives his first cheque for " Nana " ; in the way he makes Zola fit so perfectly into the brilliant reconstructions of the dining room and study at Medan ; and, above all, in his speech at the libel trial. This speech lasts for seven minutes (nearly the length of a complete short film) and is undoubtedly the greatest individual performance that the screen has yet given us. Vizetelly tells us that Zola was no orator, that the speech was badly interrupted at times. Muni, in some curious way, gives a great oration, and 'yet leaves that impression of a man who was not a public speaker. And no one will regret the toning down of the interruptions. The speech, though shortened, is presented verbatim.

The trial itself—astounding and horrifying fact—is presented with complete accuracy. It is almost incredible that such bias, such unfairness, such disregard for all the so-called sanctity of the law, should have ever been displayed ; but let no one accuse the director of exaggeration. On the contrary, much of the Dreyfus episode, especially the anti-Jewish motif, is quite definitely under-played.

Muni's brilliance may tend to curb our appreciation of the work of the director William Dieterle (who was also responsible for Pasteur). He has more than an ability for period recon- struction ; he can convey in nearly every scene an authenticity of atmosphere which virtually enables one to step back through time and participate in the actual event. His only failing is in the Opening of the film, with its bogus garret and its even more bogus presentation of Cezanne. Muni, too, may tend to blind us to the excellence of the rest of the cast.. Joseph Schildkraut, as Dreyfus, re-creates to perfection the martyr who was unfairly handicapped by fate in having an unsympathetic per- sonality, and yet suffered not ignobly all the tortures, physical and mental, of his unjust condemnation. And Donald Crisp, as Maitre Labori, steps straight froin the pages of contemporary photograph albums and presents brilliantly the disinterested and