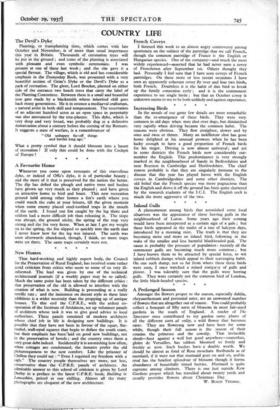 The Devil's Dyke Planting, or transplanting time, which comes with late October and November, is of more than usual importance this year in Britain. Thousands of coronation trees will be put in the ground ; and some of the planting is associated with pleasant and even symbolic • ceremonies. I was present at one of these last week ; and the site gave it a special flavour. The village, which is old and has considerable emphasis in the Domesday. Book, was presented with a very beautiful section of Grim's Dyke or the Devil's Dyke as a park of recreation. The giver, Lord Brocket, planted on either side of the entrance two beech trees that carry the label of the Planting Committee. Between these is a small and beautiful iron gate made by a blacksmith whose inherited skill goes back many generations. He is in essence a mediaeval craftsman, a natural artist in both skill and temperament. The reservation of an adjacent hundred acres as an open space in perpetuity was also announced by the tree-planter. This dyke, which is very deep and very broad, was probably dug as a defensive demarcation about a century before the coming of the Romans. It suggests a state of warfare, is a remembrancer of

What a pretty symbol that it should blossom into a haunt of recreation ! If only this could be done with the Cockpit of Europe !