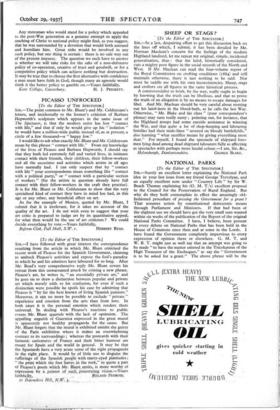 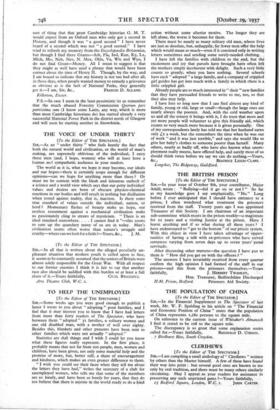 Sm,—Surely an excellent letter explaining the National Park idea in your last issue from my friend George Trevelyan, and an equally excellent note under " Country Life " by Sir W: Beach Thomas explaining his (G. M. T.'s) excellent proposal to the Council for the Preservation of Rural England. But why do they both contemplate in effect the amazingly old- fashioned procedure of pressing the Government for a grant ? That assumes action by 'constitutional deinocratic means through Parliament and Ministers. If that had been of the slightest use we should have got the very small sum wanted within six weeks of the publication of the Report of the original National Parks Committee. I have, I believe, been present at every debate on National Parks that has been held in the House of Commons since then and at some in the Lords. I have found the Government completely impervious to every expression of opinion there or elsewhere. G. M. T. and W. B. T. might just as -well -say that an attempt was going to be made " to have the matter entered in the Tricolunmis of the High Treasurer of the Exchequer," as say the " Government is to be asked for a grant." The above phrase will be the sort of thing that that great Cambridge historian G. M. T. would expect from an Oxford man who only got a second in History, and though it was " a good second " I have never heard of a second which was not " a good second." I have tried to refresh my memory from the Encyclopaedia Britannica, but though I find there Grants—Ark, Fla, Ind, Kan, Ky, La, Mich, Mo, Neb, Nev, N. Mex, Okla, Va, Wis and Wyo, I do not find Grant—Money. All I mean to suggest is that they might as well have used a phrase that would have been correct about the time of Henry II. Though, by the way, and I am bound to indicate that my history is not too bad after all, in those days, when people wanted money to remedy a grievance as obvious as is the lack of National Parks, they generally P.S.—In case I seem in the least pessimistic let us remember that the much abused Forestry Commission Quorum pars parvissima sum (I know some Latin, any way, which is more than most Cambridge historians do) has started already a very successful National Forest Park in the district north of Glasgow and will soon be starting another in Snowdonia.