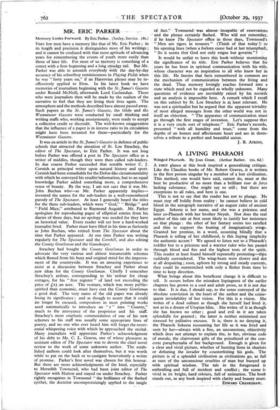 Memory Looks Forward. By Eric Parker. (Seeley, Service.-I8s.) VERY few men have a memory like that of Mr. Eric Parker ; in its length and precisioh it distinguishes most of his writings ; and it cannot be confused with that mere. aptitude of advancing years for remembering the events of youth more easily than those of later life. For most of us memory is something of a comet with a firm beginning and a long smudgy tail. But.Mr. Parkir was able to astonish everybody with the day-by-day accuracy of his schoolboy reminiscences in Playing Fields when he was "forty years on," if an Harrovian phrase may be in- offensively applied to Eton. In his latest book we have memories of journalism beginning with the St. James's Gazette under Ronald McNeill, afterwards Lord Cushendun. Those who were journalists then will be made by the realism of the narrative to feel that they are • living their lives again. The atmosphere and the methods described have almost passed away. Such papers as the St. James's Gazette, the Globe and the Westminster Gazette were conducted by small thinking and writing staffs who, working anonymously, were ready to accept a collective credit or discredit. The well-known exaggeration that the influence of a paper is in inverse ratio to its circulation might have been invented for them—particularly for the Westminster Gazette.

It was an article in the St. James's Gazette in defence of public schools that attracted the attention of St. Loe Strachey, the editor of The Spectator, to Eric Parker. It was not long before Parker was offered a post in The Spectator office as a writer of middles, though they were then called sub-leaders. In due course Parker succeeded that notable writer C. J. Cornish as principal writer upon natural history and sport. Cornish had been remarkable for the Defoe-like circumstantiality with which he conveyed his erudite'information, but to an equal knowledge Parker added something more, a comprehensive sense of beauty. By the way, I am not sure that it was Mr. John Buchan Who—as Mr. Parker apparently implies— invented the names for the sub-leaders in a well-remembered parody of The Spectator. At least I generally heard the titles for the three sub-leaders, which were " God," " Bridge " and " Field Mice," attributed to Raymond Asquith. Mr. Parker apologises for reproducing pages of elliptical entries froin his diaries of those days, but no apology was needed for they have an historical value. Every reader will see how a hard-worked journalist liVed. Parker must have filled in his time as furiously as John Buchan, who retired from The Spectator about the time that Parker appeared. At one time Parker was writing regularly for The Spectator and the Cornhill, and also editing the County Gentleman and the Gamekeeper.

Strachey had bought the County Gentleman in order. to advocate the very various and almost innumerable schemes which flowed from his busy and original mind for the improve- ment of the countryside. It was an amusing . experience to assist at a discussion between Strachey and Parker about new ideas for the County Gentleman. Chiefly I remember Strachey's ardour, corresponding to his • ardour for cheap cottages, for his " free register " of land not exceeding the price, of D5 an acre. The venture, 'which was more- public- spirited than economic, must have cost the County Gentleman a good deal. The very name of the old paper was already losing its significance ; and as though to assert that it could no longer be excused, compositors in most printing works used automatically to introduce an " r " into ".County," much to the annoyance of the proprietor and his staff. Strachey's most emphatic commendation of one of his new schemes to his staff was usually some appropriate lines of poetry, and no one who ever heard him will forget the rever- ential whispering voice with which he approached the recital. Many journalists will appreciate Parker's acknowledgment of his debt to Mr. C. L. Graves, one of whose pleasures as assistant editor of The Spectator was to devote the chief novel review to the work of some unknown author. The estab- lished authors could look after themselves, but it was worth while to pat on the back or to castigate benevolently a writer of promise. Parker's first novel was chosen for this honour.

But there are more acknowledgments of the kind, especially to Meredith Townsend, who had been joint editor. of The Spectator with Hutton and stayed on under Strachey. Parker rightly recognises .in Townsend " the -brilliance of the flashed epithet, the doctrine uncompromisingly applied to the tangle of fact." Townsend' was: almost- incapable of reservations and the phrase certainly flashed. Who will not rememlier, if he knew The Spectator office in those days, Townsend's " Men are tigers in trousers " (Think of that today !)' 'or his opening lines (when a forlorn cause had at last triumphed), " So it seems that-God not only reigns but governs " ?

It would be unfair to leave this book iwitho'ut mentioning the significance of its title. Eric Parker believes that for years he has been in spiritual communication with his wife, whose character was an inspiration to all who knew her in this life. He fancies that facts remembered in common are the Mechanisin of communication between the living and the dad. Thus memory lovingly reaches forward into a state which need not be regarded as wholly unknown. Many ' questions of evidence are inevitably raised by his records and an analysis is impossible here. A remark which I recall on this subject by St. Loe Strachey is at least relevant. He was not a spiritualist but he argued that the apparent triviality of most alleged messages from the other world was not in itself an objection. " The apparatus of communication must go through the first stages of invention. Let's suppose that it is a very crude sort of telephone." Eric Parker's records, presented " with all humility and trust," come from the depths of an honest and affectionate heart and are in them- selves a tribute to a perfect and beautiful union.