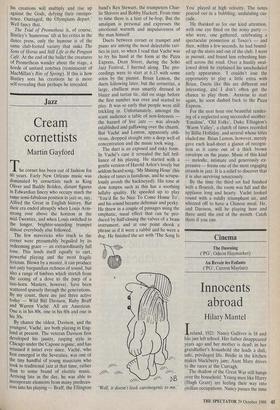 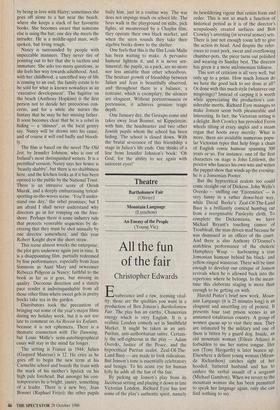 Ireland, 1921: Nancy Gulliver is 18 and s just left school. Her father disappeared years ago and her mother is dead; in her grandfather's household she leads a dull, safe, privileged life. Bridle in the kitchen makes blackberry jam; Aunt Mary drives to the races at the Curragh.

The shadow of the Great War still hangs over the household. Young men like Harry (Hugh Grant) are feeling their way into civilian occupations. Nancy passes the time by being in love with Harry; sometimes she goes off alone to a but near the beach, where she keeps a stack of her favourite books. She becomes aware that someone else is using the hut; one day she meets the intruder. He is a middle-aged man, well- spoken, but living rough.

Nancy is surrounded by people with impeccable manners. They never tire of pointing out to her that she is tactless and immature. She asks too many questions, as she feels her way towards adulthood. And, with her childhood, a sanctified way of life is coming to an end; the family estate is to be sold for what is known nowadays as an `executive development'. The fugitive on the beach (Anthony Hopkins) is the first person not to deride her precocious con- cerns, and for a while she nurses the fantasy that he may be her missing father.

It soon becomes clear that he is a rebel in hiding — a `shinner', as the local gentry say. Nancy will be drawn into his cause; and of course it will end badly and bloodi- ly.

The film is based on the novel The Old Jest, by Jennifer Johnson, who is one of Ireland's most distinguished writers. It is a prettified version; Nancy says her house is 'beastly shabby', but there is no shabbiness here, and the kitchen looks as if it has been opened to the public by the National Trust. There is an intrusive score of Oirish Muzak, and a deeply embarrassing lyrical- sporting-in-the-waves scene. 'You'll under- stand one day,' the rebel promises; but I am afraid I shall never understand why directors go in for romping on the fore- shore. Perhaps there is some industry rule that protects venerable sequences by de- creeing that they must be shot annually by one director somewhere, and this year Robert Knight drew the short straw.

This scene almost wrecks the enterprise; the plot gets underway again just in time. It is a disappointing film, partially redeemed by fine performances, especially from Jean Simmons as Aunt Mary and newcomer Rebecca Pidgeon as Nancy: faithful to the book as far as it goes, but missing its quality. Decorous direction and a stately pace render it indistinguishable from all those other films where sweet gels in pretty frocks take tea in the garden.

Distributors took the precaution of bringing out some of the year's major films during my holiday week, but it is not too late to comment on Au Revoir les Enfants, because it is not ephemera. There is a thematic connection with The Dawning, but Louis Malle's semi-autobiographical essay will stay in the mind far longer.

goes off to begin the new term at his Carmelite school and boards the train with the mark of his mother's lipstick on his high pale forehead. But amongst his con- temporaries he is bright, jaunty, something of a leader. There is a new boy, Jean Bonnet (Raphael Fetjo); the other pupils bully him, just in a routine way. The war does not impinge much on school life. The boys walk in the playground on stilts, pick fights, sit mesmerised by a Chaplin film; they operate their own black market, and when the siren sounds they take their algebra books down to the shelter.

One feels that this is the film Louis Malle has been waiting to make. A pervasive humour lightens it, and it is never sen- timental; the pupils, as a pack, are no more nor less amiable than other schoolboys. The hesitant growth of friendship between Julien and Jean is beautifully observed, and throughout there is a balance, a restraint, which is exemplary; the silences are eloquent. Without portentousness or pretension, it achieves genuine tragic depth.

One January day, the Gestapo come and takes away Jean Bonnet, ne Kippelstein; with him, the headmaster and two other Jewish pupils whom the school has been hiding. The school is closed down. With the brutal severance of this friendship a stage in Julien's life ends. One thinks of a line from Jennifer Johnson's book: 'Oh God, for the ability to see again with innocent eyes!'