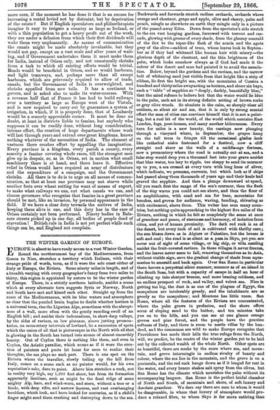 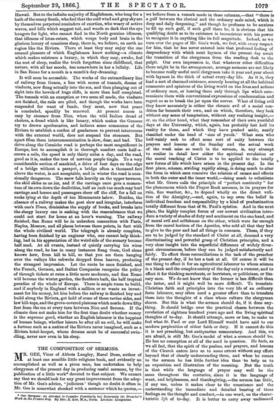 THE WDTTER GARDEN OF EUROPE.

It will soon be accessible. The works of the extraordinary line of railway from Genoa, a line with scores of tunnels, dozens of viaducts, now flung actually into the sea, and then plunging out of sight into the bowels of huge cliffs, is more than half completed. The tunnels with an exception or two seem all made, the viaducts are finished, the rails are piled, and though the works have been suspended for want of funds, they must, now that peace is concluded, speedily be renewed. At present access is easy by steamer from Nice, when the wild Italian dread of cholera, a dread which is like lunacy, which makes the Genoese try to drown apothecaries, and induces some communes of the Riviera to establish a cordon of gendarmes to prevent intercourse with the external world, does not suspend the steamers. But apart goin them intercommunication is slow, dear, and bad. The drive along the Corniche road is perhaps the most magnificent in Europe, but to accomplish it in thorough comfort costs half-a- crown a mile, the speed is only thirty miles a day, and the road, good as it is, makes the toes of nervous people tingle. To a very considerable section of mankind, a drive of four days on the edge of a bridge without a parapet, a bridge often a thousand feet above the water, isnot acceptable, and in winter the road is occa- sionally dangerous. The snow falls heavily on the upper terraces, the skid slides as on ice, and if the carriage once gets a momen- tum of its own down the declivities, half an inch too much may hurl carriage and horses and passengers sheer off the cliff, for a fall on rocks lying at the depth of ten Monuments below. Besides, the .absence of a railway makes the post slow and irregular, interferes with one's Times, diminishes the supply of books, and breaks into -the sleepy luxury one is seeking with the remembrance that we could not start for home at an hour's warning. The railway finished, San Remo will be in unbroken connection with Paris, Naples, Moscow, and all places between those points, in fact with the whole civilized world. The telegraph is already complete, iniving been finished by an engineer who, one cannot help think- ing, had in his appreciation of the weird side of the scenery become half mad. At all events, instead of quietly carrying his wires along the road, he has in many instances flung them, God alone knows how, from hill to hill, so that you see them hanging over the valleys like cobwebs dropped from heaven, producing the strangest impression. Let the route be once finished, and the French, German, and Italian Companies recognize the policy of through tickets at rates a little more moderate, and San Remo will become the winter garden, the Southern bath, the half tropical paradise of the whole of Europe. There is ample room to build, and if anybody in England with a million or so wants an invest- ment for his money, let him before the railway is finished buy and build along the Riviera, get hold of some of those ravine sides, and low hill-tops, and the grove-covered plateaus which nestle down fifty -feet from the sea at every turn between Nice and Savona. If the -climate does not make him for the first time doubt whether money is the supreme good, whether an English labourer is the happiest -of human beings, whether leisure be after all an evil, he will make a fortune such as a native of the Riviera never imagined, such as a Riviera hotel-keeper, whose dreams must be of successful swin- dling, never saw even in his sleep.