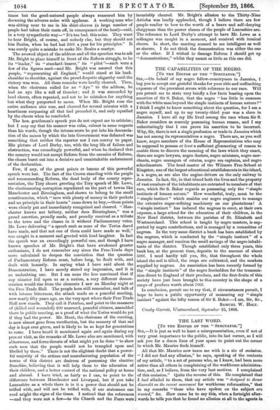 THE CAPABILITIES OF THE NEGRO.

[Jo THE EDITOR OF THE "SPECTATOR."] Sin,—On behalf of my negro fellow-countrymen in Jamaica, I beg you to accept our grateful thanks for your able and unflinching exposure of the prevalent errors with reference to our race. Will you permit me to state very briefly a few facts bearing upon the assertion of Sir S. Baker, that the negro "has little in common with the white man beyond the simple instincts of human nature?" I think I ought to know something about the question, for I am a negro myself, and up to my twenty-third year was a slave in Jamaica. I have all my life lived among the race whom Sir S. Baker considers as scarcely possessing human reason, and I say unhesitatingly that I can prove his assertion to be incorrect. Why, Sir, there is not a single profession or trade in Jamaica which has not among its representatives a negro. There are, as you well know, negro members of the House of Representatives who may be supposed to possess at least a sufficient glimmering of reason to enable them to discern the meaning of the laws which they enact, there are negro lawyers, negro doctors, negro ministers, negro mer- chants, negro managers of estates, negro sea captains, and negro schoolmasters. The head master of the Wilmore Free School at Kingston, one of the largest educational establishments in the island, is a negro, as are also the engine-drivers on the only railway in Jamaica. In fact, Sir, in that island both the lives and the property of vast numbers of the inhabitants are entrusted to members of that race, which Sir S. Baker regards as possessing only the "simple instincts of human nature." How wonderful, truly, must be the "simple instinct" which enables our negro engineers to manage the extensive sugar-refining machinery on our plantations! A "simple instinct" has induced the negroes to erect, at their own expense, a large school for the education of their children, in the New Road district, between the parishes of St. Elizabeth and Westmoreland. This school is taught by negro masters, is sup- ported by negro contributions, and is managed by a committee of negroes. In the very same district a bank has been established by the negroes, which is conducted by the "simple instinct" of a negro manager, and receives the small savings of the negro inhabi- tants of the district. Though established only three years, this bank has, at the present time, deposits to the amount of about 500/. I need hardly tell you, Sir, that throughout the whole island the soil is tilled, the crops are cultivated, and the markets supplied by negroes. An association has been recently formed by the "simple instincts" of the negro freeholders for the transmis- sion direct to England of their produce, and the first-fruits of this society have just been brought to this country in the shape of a cargo of produce worth about 700/.

In conclusion, permit me to say that, if circumstances permit, I hope to have a public opportunity of measuring my "simple instinct" against the lofty reason of Sir S. Baker.—.I am, Sir, &c.,