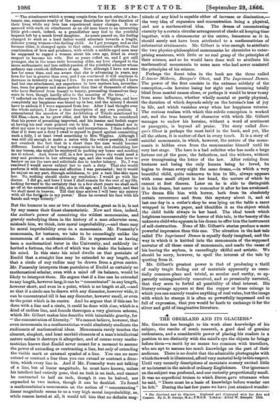 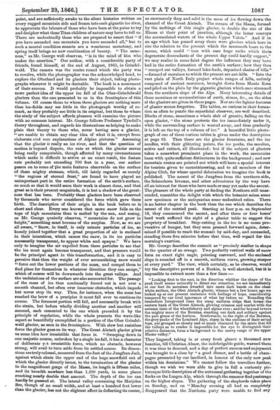 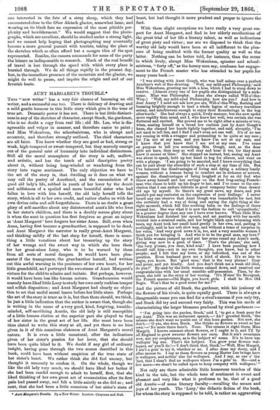 THE OB.ERLAND AND ITS GLACIERS.* Mn. GEORGE has brought to

his -work -clear -knowledge of his subjecb, the results of much research, a good deal of genuine enthusiasm, and a considerable power of placing his readers in a position to see distinctly with the mind's eye the objects he brings before them—a merit by no means too common with travellers, who are apt to assume too much -knowledge on the part of their audience. There is no doubt that the admirable photographs with which the work is illustrated, afford very material help in thia respect. Until very recently descriptions of mountain scenery excited little or nointerest in the minds of ordinary Englishmen. Our ignorance on the subject was profound, and our curiosity proportionally small. It was no superficial trait= to which Bacon. gave utterance when he said, "There must be a basis of knowledge before wonder can belch." During the last few years we have just- attained wonder-

Mr. George describes the summit as 44 precisely similar in shape to the quarter of an orange. Two perfectly vertical walla of -snow form an exact right angle, pointing eastward, and the enclosed slope is rounded off in a smooth, uniform curve, growing. steeper at every yard." The view, which certainly, as he observes, would try the descriptive powers of a Ruskin, is well sketched, but4it is impossible to extract more than a few lines :— " Looking first to the east, in the direction whither the shape of 'the peak itself seems naturally to direct our _attention, we see immediately at our feet its moraines dwarfed into mere dark bands on the clear white surface, the Ober Aletsch glacier, whence but a few hours ago-we looked up at our present eminence with feelings of hope, considerably tempered by our total ignorance of what lay before us. Bounding the immediate foreground rises the steep uniform ridge that forma &the eastern bank of the Great Aletsch, glowing crimson and scarlet with the autumn tints of the vihortleberry and alpine rose ; and far beyond towers the mighty mass of the Bernina, standing out dark and solitary against the pale green of the horizon. Southwards, to the right of the Bernina, the grey peaks of the Lombard Alps, sharp in the outlines of their actual tops, yet grouped so closely and so much obscured by the mists that fill the valleys as to render it impossible for the eye to distinguish their relative distances, form a background to the snowy range of the upper Rhone valley."

They lingered, taking in at every fresh glance a thousand new beauties, till Christian Abner, the indefatigable guide, warned them it was time to descend, and a day of perfect success and enjoyment was brought to a close by "a good dinner, and a bottle of cham- pagne presented by our landlord, in honour of the only new peak within his dominions." We cannot follow the travellers further, though we wish we were able to give in full a curiously pic- turesque little description of the autumnal gathering together of the flocks on the Lnsgen Alp, which through the summer find pasturage on the higher elopes. The gathering of the shepherds takes place on Sunday, and on " Monday evening all had so completely disappeared that the Nesthorn party were unable to- find any

one interested in the fate of a stray sheep, which they had encountered close to the Ober Aletsch glacier, somewhat lame, and wearing on its black face an expression of the most pitiable per- plexity and bewilderment." We would suggest that the photo- graphs, which are excellent, should be studied under a strong light, and we cannot help hoping that photographing may eventually become a more general pursuit with tourists, taking the place of the sketches which so often afford but a meagre idea of the spot represented. Besides, the camera commands for some of the party the leisure so indispensable to research. Much of the real benefit of travel is lost through the speed with which every place is hurried through. We do all things rapidly in the present day, but, in the immediate presence of the mountain and the glacier, we might do well to pause, and inquire the origin and end of our feverish haste.