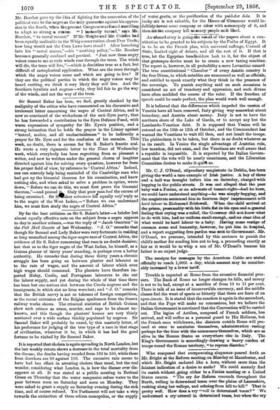 the world a rare example of Irish justice. A boy of-three and a half was brought before him on Saturday, chargedewith begging in the public streets. It was .not alleged that- the poor baby was a Fenian, or an advocate of -tenant-right--had he.been, we could have understood anything—le was simplybegging, and the magistratesentenced him.to fourteen days' imprisonment with hard labour in „Richmond Brizlewell. -When the !child arrived at the-prison, presamably,svithhis eyesandmgeneral feeling. that crying was &relief, the, Governor did- notanow -what to do with him, had no uniform smathenongh, aattne clear idea of what would be hard labour ito a baby. Having some .vestige of common sense and .humanity, however, he put him in .hospital, and a report suggesting free pardon was -sent to Government. -Mr. O'Donel, we presume, intended by this sentence to punish the child's mother for sending him out to beg, a proceeding exactly as fair as it would be to-whip a son of Mr. O'Donel's because his father is an unjust judge.