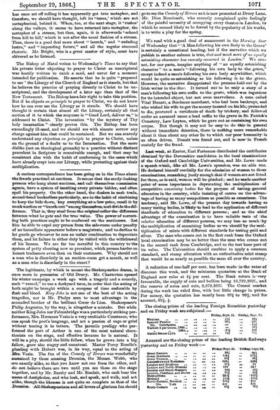 obtained the Devonshire- candidates in. the local exantinations of the Oxford= and Cambridge Universities, and Mr. Lowe made a--speech -which, 'like all Mr. Lowe's speeches, was enable one. He declared himself cordially for the admission= of women; to these examinations, retaszking justly enough. that if -women are net fitted for-them, as is, said,' women' will be -plucked ; and her made another point=of some importance in deprecating the multiplication of competitive examining bodies for the purpose of testing :general education-in the country,- while insisting of coarse on thm-advan- tags of havitignsanany competitors as possible as examinees. The tendency, said Mr. Lowe, of =the present day towards haling so many- testing bodies, iilikelyto lead to the application of_different titandavds of • education to different persons ; and 'as the chief advantage of-the'examination is to have -reliable 'Oats of the relative -education of different persons, we may lose -as much shy theraultiplication Of examining bodies 'tts-we 'shout:thy the- mul- tiplication of mints with different standards' for testing geld =and silver. The man who comes out in-the first-rank' from -the' Oifiard local examination may be no better than-the man -who comes out in the second rank from Cambridge, and'so the test' iosespartof its value. The Universities should conibine to apply a common standard, and stamp education with an authoritative' mint stamp that would be as nearly aspossible the same all over the- cotmtry.