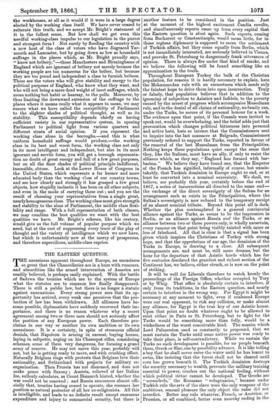 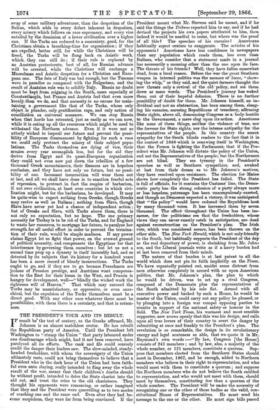 /THE uneasiness apparent throughout Europe, an uneasiness _L so great that the Chancelleries are in a buzz with rumours, and absurdities like the armed intervention of America are readily believed, is perhaps easily explained. With the battle .of Sadowa the treaties which are to the system of Europe what the statutes are to common law finally disappeared. There is still a public law, but there is no longer a statute against annexations. Every strong power sees that its op- portunity has arrived, every weak one perceives that the pro- tection of law has been withdrawn. All alliances have be- tome possible, diplomatists have suddenly recovered their im- .portance, and there is no reason whatever why a secret agreement among two or three men should not seriously affect the position of any European power. Each therefore pro- olaims in one way or another its an ambition or its own uneasiness. It is a certainty, in spite of strenuous official denials, that Napoleon is arming in earnest, baying horses, laying in saltpetre, urging on his Chassepot rifles, considering .schemes, some of them very dangerous, for forming a grand .army of reserve. He may not move this year, probably will not, but he is getting ready to move, and with crushing effect. Naturally Belgium rings with protests that Belgians love their nationality, and Switzerland with projects for military re- organization. Then Prussia has not disarmed, and does not make peace with Saxony ; Austria, relieved of her Italian foe, sullenly calculates, as Count Bismarck hinted, whether the war could not be renewed ; and Russia announces almost offi- oially that, treaties having ceased to operate, she resumes her position as natural protector of all her co-religionists. All this is intelligible, and leads to no definite result except enormous expenditure and injury to commercial security, but there is

another feature to be considered in the position. Just at the moment of the highest excitement Candi& revolts, and simultaneously reports come up from every capital that the Eastern question is afoot again. Such reports, coming from Bucharest or Constantinople, would mean little, for in those regions diplomacy is supposed to mean the settlement of Turkish affairs, but they come equally from Berlin, which is not immediately interested, are seriously believed in Vienna, and provoke St. Petersburg to dangerously frank utterances of opinion. There is always fire under that kind of smoke, and we believe the following will be found something like an approximation to the truth. Throughout European Turkey the bulk of the Christian population, for reasons it is hardly necessary to explain, hate the Mohammedan rule with an earnestness which needs only the faintest hope to drive them into open insurrection. Truly or falsely, that population believes that in addition to the ignominy of subjection to Asiatics and Infidels, to the poverty caused by the arrest of progress which accompanies Mussulman rule, and to the denial of all claims of nationality, no family can, under the Turks, be secure of its personal honour for a week. The evidence upon that point, if the Consuls were invited to speak out, would be overwhelming, and the belief adds just that provocation which changes political bitterness into personal and active hate, hate so intense that the Commissioners sent to inquire into the last massacre at Belgrade, Commissioners previously ordered to support the Turks, reported in favour of the removal of the last Mussulman from the Principalities. Nothing keeps these populations quiet except the sense that they, like the Italians, must have an ally, if only to resist the alliance which, as they say, "England has formed with bar- barism." We believe they have found one, that the Emperor of the French has signified, informally of course, but unmis- takably, that Turkish dominion in Europe ought to end, or at least be converted into a nominal suzerainty. We shall, we believe, see probably this year, certainly before the end of 1867, a series of insurrections all directed to the same end— the exchange of the direct sovereignty of the Sultan for an arrangement such as exists in the Principalities, where the Sultan's sovereignty is now reduced to the temporary receipt of an almost nominal tribute. Beyond this point all is dark. Whether the plan contemplated is a general continental alliance against the Turks, as seems to be the impression in Berlin, or an alliance against Russia and the Turks, or an alliance between two or three powers only, is wholly uncertain, every rumour on that point being visibly tainted with more or less of falsehood. All that is clear is that a signal has been given which inspires the Christians of Turkey with strong hope, and that the opprobrium of our age, the dominion of the Turks in Europe, is drawing to a close. All subsequent arrangements are, and must be, still mere dreams, but the hoar for the departure of that Asiatic horde which has for five centuries desolated the grandest and richest section of the Continent has, we believe, either struck, or is now on the point of striking.

It will be well for Liberals therefore to watch keenly the proceedings of the Foreign Office, whether occupied by Tory or by Whig. That office is absolutely certain to interfere, if only from its traditions, in the Eastern question, and nearly certain to interfere in the wrong way. For Egypt it might be necessary at any moment to fight, even if coalesced Europe were our real opponent, to risk any collision, or make almost any alliance, for Egypt is the true key of our Asiatic house. Upon that point no doubt whatever ought to be allowed to exist either in Paris or St. Petersburg, but to fight for the Turks would be something more than folly, would be a wickedness of the worst conceivable kind. The maxim which Lord Palmerston used so constantly to propound, that we must sustain the Turks until some native power was ready to take their place, is self-contradictory. While we sustain the Turks no such development is possible, for no people beneath them, Greek or Slav, can by possibility advance. It is like telling a boy that he shall never enter the water until he has learnt to swim, like insisting that the forest shall not be cleared until corn has grown beneath it. The Turkish dominion destroys the security necessary to wealth, prevents the military training essential to power, crashes out the national feeling, without which political virtue cannot be developed. The Greeks are "scoundrels," the Roumans "voluptuaries," because under Turkish rule the arts of the slave were the only weapons of the ambitious, sensual pleasure the only object the ruler did not interdict. Better any rule whatever, French, or Austrian, or Prussian, or all combined, better even anarchy ending in the sway of some military adventurer, than the despotism of the Sultan, which adds to every defect inherent in despotism, every =ism, which follows on race supremacy, and every vice entaileftby the dominion of a lower civilization over a higher one. If the. Turks are reduced to a suzerainty, good, for the Christians- obtain a breathing-time for organization ; if they are expelled, better still, for while the Christians will be freed, the Turks will be flung back on Asiatic work, which, they can still do ; if. their rule is replaced by an Austrian protectorate, best of all, for Russian advance will be arrested, while the Christians will exchange a Mtissulman and' Asiatic despotism for a Christian and Euro- pean one. The fate of Italy was bad enough, but the Tescane were in paradise as. compared with the Bulgarians, and. the result of Austrian rule was to solidify Italy. Russia no doubt must be. kept from, reigeing in the South, ,more especially at Constantinople, but France and Austria feel that even more keenly, than we do, and that necessity:is no excuse for main- taining,. a „government like that of the Turks, whose only object. is plunder, onlygratifieation rape, and only notion of conciliation. an .universal massacre. We can stop Massie -when that horde has retreated, just as easily as we can now, while it is eating up all the resources- which might.be used-to withstand the Northern advance. Even, if. it were not so utterly wicked to imperil our future and prevent the possi- bility. of. European disarmament by fighting for such a race we. could only protract the misery of their subject popu- lations. The Turks themselves are dying of vice, their armies. every year accomplish less, but for the aid they derive from Egypt and its quasi-European organization they could, not even now put down , the rebellion of a few thousand' Greek mountaineers, their finances are in hopeless confusion, and they have not only no future, but no possi- bility of one. Incessant insurrection will wear them out at last, and all we shall have done is to sanction fearful acts of repression, to protract. in fact the empire of barbarism, if .not over civilization, at least over, countries in' whichcivi- lization might, but for the barbarians, be developed. It' may be qnite.avise to expect nothing from Greeks; though.Greeks may revive as well as Italians • nothing from Slays, though Slavs.have never yet had a chance, of independent action ; but of- Greeks and. Slays, with Turks above them, there is not only no expectation, but no hope. The one primary necessity for Turkey is to be rid. of the Turks, and for England to waste:her resources, to mortgage herfuture, to paralyze her strength,for all useful effort in order to prevent the termina- ton, of their rule, would-be simple.madness. If any power claims Egypt let us fight that power, on the avowed ground. of political necessity, and. compensate the Egyptians for that interference by governing them ourselves ; but let us not a • second time prop up a dynasty in itself incurably bad, and so detested by its subjects that its history for a hundred years has been a mere record of bloody insurrections. The Turks ought to go, and if they are to go because Frenehmen are jealous of Prussian prestige, and Austrians want compensa- tion to the East for their losses in the West, and Prussia is hungry. for development, well—" blindly the wicked work the righteous will of Heaven." That which may succeed the Turka may be unsatisfactory, or oppressive, or even anar- chical, but the expulsion of the Turks themselves must be a direct good. With any other race whatever there must be possibilities, with them there is.a certainty, and that is rotten- ness.