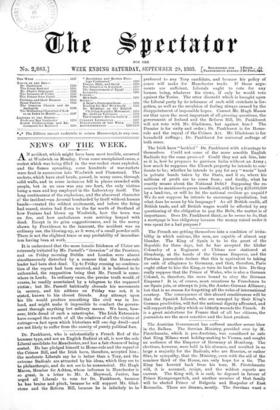 Dr. Pankhurst, who is substantially a French Red of the

humane type, and not an English Radical at all, is now the sole Liberal candidate for Manchester, and has a fair chance of being seated. He has pledged himself to Home-rule and the repeal of the Crimes Bill, and the Irish have, therefore, accepted him ; the moderate Liberals say he is better than a Tory, and the extreme Radicals are attracted by his ideas, which they see to be philanthropic, and do not see to be nonsensical. Mr. Hugh Mason, Member for Ashton, whose influence in Manchester is so great, in a letter to Mr. A. Heywood, Junior, has urged all Liberals to vote for Dr. Pankhnrst, because he has brains and pluck, because he will support Mr. Glad- stone and the Reform Bill, because he is infinitely to be

preferred to any Tory candidate, and because his policy of peace will make for Manchester trade. If those argu- ments are sufficient, Liberals ought to vote for any human being, whatever his views, if' only he would vote against the Tories. The utter discredit which is brought upon the Liberal party by its tolerance of such wild crotchets is for- gotten, as well as the revulsion of feeling always caused by the disappointment of impossible hopes. Cannot Mr. Hugh Mason see that upon the most important of all pressing questions, the government of Ireland and the Reform Bill, Dr. Pankhurst will not vote with Mr. Gladstone, but against him P The Premier is for unity and order ; Dr. Pankhurst is for Home- rule and the repeal of the Crimes Act. Mr. Gladstone is for household suffrage ; Dr. Pankhurst for universal suffrage of both sexes.