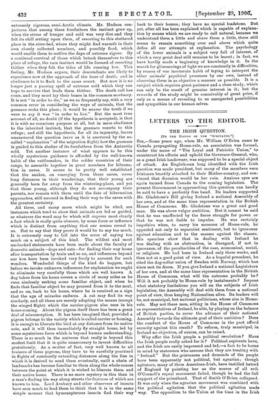 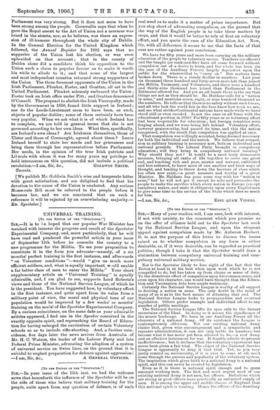 L ETTERS TO THE EDITOR.

[TO TUS EDITOR OF Tax "SP ROT A.TOR."] SIR,—Some years ago, when Mr. William O'Brien came to Canada propagating Home-rule, an association was formed, under the name of "The Loyal and Patriotic Union," to counteract his efforts and uphold the Governor-General, who, as a great Irish landowner, was supposed to be a. special object of attack. An Englishman long identified with the Irish question was made president, but many of the members were Irishmen heartily attached to their Mother-country, and con- vinced that disunion would be her ruin. Anxious eyes are again turned from Canada to the coming legislation. The present Government in approaching this question can hardly be said to have a perfectly free band. Its leaders supported Mr. Gladstone's Bill giving Ireland a national Assembly of her own, and at the same time representation in the British House of Commons. Mr. Gladstone was a great and good man. He was above vulgar ambition. But it cannot be said that he was unaffected by the fierce struggle for power or that he was not liable to impulse. He was certainly impulsive when, to carry his measure of Home-rule, ho' appealed not only to separatist sentiment, but to ignorance against education and to the masses against the classes. His speeches show that in dealing with Ireland he was dealing with an abstraction, in disregard, if not in ignorance, of the peculiarities of the ease, economical, social, or religious. He had been in Ireland only three weeks, and then not at a good point of view. As a hopeful precedent, he cited the dog-collar union of Sweden with Norway, which has since met its doom. If you give Ireland a national Legislature of her own, and at the same time representation in the British House of Commons, what will the outcome probably be ? - Will it not probably bellome-rule by instalments ? Impose what statutory limitations you will on the subjects of Irish legislation, the Assembly will deal with them from a national point of view, thus keeping Nationalism alive. Its leaders will be, not municipal, but national politicians, whose aim is Home- rule. May not these men, sitting in the House of Commons as representatives of Ireland, be able, by playing on the balance of British parties, to cover the advance of their national Assembly towards the ultimate goal of their ambition ? Does the conduct of the House of Commons in the past afford security against this result ? To reform, truly municipal, in Ireland no objection, of course, can be raised.

Why offer the Irish people a political revolution ? Have the Irish people really asked for it ? Political aspirants have, and the Irish are easily impressed and led,—a fact to be borne in mind by statesmen who assume that they are treating with "Ireland." But the grievances and demands of the people have been apparently not political, but agrarian ; though agitators, many of them American-Irish, have instilled hatred of England by painting her as the source of all evil. O'Connell's repeal movement failed, though he had the full support of the priesthood. That of Smith O'Brien collapsed. It was only when the agrarian movement was combined with the political agitation that the political agitation made - way. The opposition to the Union at the time in the Irish

Parliament was very strong. But it does not seem to have been strong among the people. Cornwallis says that when he gave the Royal assent to the Act of Union not a murmur was heard in the streets, nor, as he believes, was there an expres- sion of ill-humour throughout the whole city of Dublin. In the General Election for the United Kingdom which followed, the Annual Register for 1802 says that no supporter of the Union lost his election, or was even upbraided on that account ; that in the county of Dublin alone did a candidate think his opposition to the Union such a claim to popular favour as to make it worth his while to allude to it ; and that some of the largest and most independent counties returned strong supporters of the Union. The three foremost opponents of the Union in the Irish Parliament, Plunket, Foster, and Grattan, all sat in the United Parliament. Plunket solemnly embraced the Union ; Foster took an Irish office under Pitt; and Grattan denounced O'Connell. The proposal to abolish the Irish Viceroyalty, made by the Government in 1850, found little support in Ireland ; nor do the Lords-Lieutenant seem to have been, as such, objects of popular dislike ; some of them certainly have been very popular. When we ask what it is of which Ireland has to complain, we are told in general terms that she is not governed according to her own ideas. What then, specifically, are Ireland's own ideas ? Are Irishmen themselves, those of Ulster and those of Connaught, agreed about them ? Leave Ireland herself to state her needs and her grievances and bring them through her representatives before Parliament. Her needs, in the opinion of the true Irish patriots and Liberals with whom it was for many years my privilege to hold intercourse on this question, did not include a political [We publish Mr. Goldwin Smith's wise and temperate letter with great satisfaction, and are delighted to find that his devotion to the cause of the Union is unabated. Any serious Home-rule Bill must be referred to the people before it becomes law, and we are convinced that on such a reference it will be rejected by an overwhelming majority.— En. Spectator.]