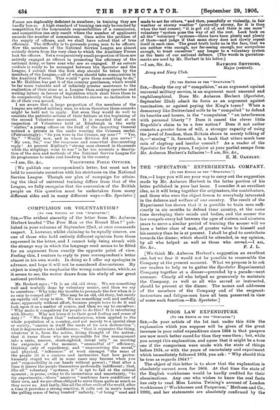 hope you will see your way to carry out the suggestien made by Mr. Auberon Herbert in the latter portion of his letter published in your last issue. I consider it an excellent idea, as it will bring together the originators, the contributors, and those who were the object-lesson to everybody interested in the defence and welfare of our country. The result of the Experiment has shown that it is possible to train men suffi- ciently in six month e to defend their ceuntry, at the same time developing their minds and bodies, and the sooner the law compels every lad between the ages of sixteen and nineteen years to serve a similar period of training the sooner will we have a better class of man, of greater value to himself and his country than he is at present. I shall be glad to contribute towards the dinner, which should be attended, in my opinion, by all Who helped as well as those who served.—I [We think Mr. Auberon Herbert's suggestion an excellent one, but we fear it would not be possible to reassemble the Company at the present moment. What we propose is to ask our readers to help us to gather the Spectator Experimental Company together at a dinner—preceded by a parade—next summer. Clearly all who helped so generously to maintain the Company, as well as all who served or instructed, should be present at the dinner. The names and addresses of the members of the Company and of the sergeant- instructors and fatigue-men have all been preserved in view of some such function.—En. Spectator.]