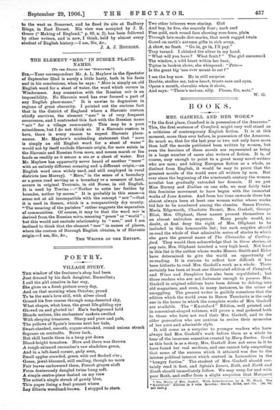 THE TILTIMENT "MER" IN SUSSEX PLACE-

[To TH1 EDITOR Or THI "Srectaroa."] SIR,—Your correspondent Mr. A. L. Mayhew in the Spectator of September 22nd is surely a little hasty, both in his facts and in his conclusions, when he says : "Mere is simply an old English word for a sheet of water, the word which occurs in Windermere. Any connexion with the Russian mir is an impossibility. No Slavonic word has ever formed a part of any English place-name." It is unwise to dogmatise in regions of great obscurity. I pointed out the curious fact that in the district of England where a Slavonic custom chiefly survives, the element " mer" is of very frequent occurrence, and I contrasted this fact with the Russian name " mir " for a village community. This may be a pure coincidence, but I do not think so. If a Slavonic custom is here, there is every reason to expect Slavonic place- names. Mr. Mayhew's misleading statement that "mere is simply an old English word for a sheet of water" would not by itself exclude Slavonic origin, for mere exists in the Slavonic and Russian form more, and means marsh or fen lands as readily as it means a sea or a sheet of water. But Mr. Mayhew has apparently never heard of another "mere" with an entirely different meaning and a different origin,—an English word once widely used, and still employed in rural districts (see Murray). "Mere," in the sense of a boundary or a green road serving as a boundary or a measure of land, occurs in original Teutonic, in old Norse, in old English. It is used by Trevisa :—" Nother to Bette her feeldes by boundes, nother by meres." It is probably in this sense—a sense not at all incompatible with the concept "mir "—that it is used in Sussex, which is a comparatively dry county. "The mearing of the parishes" rather suggests the separation of communities. Of coarse, it may be that the word mir is derived from the Russian miru, meaning "peace" or "world" ; but this would not exclude relationship to " mer," and I am inclined to think that the element " mer" in names of places, where the custom of Borough English obtains, is of Slavonia origin.—I am, Sir, &c.,

THE WRITER OF THE REVIEW.