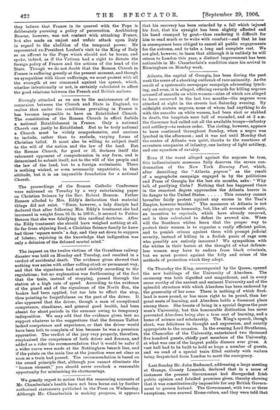 Page 2, 29 September 1906 — We greatly regret to notice that the reassuring accounts of
Close

We greatly regret to notice that the reassuring accounts of

Mr. Chamberlain's health have not been borne out by further authorised statements published in the Press on Wednesday. Although Mr. Chamberlain is making progress, it appears

that his recovery has been retarded by a fall which injured his . foot, that his eyesight has been slightly affected and his band cramped by gout—thus rendering it difficult for him to read much or to.write with comfort—and that he has in consequence been obliged to cancel all public engagements for the autumn, and to take a long and complete rest. We are glad, however, to learn that although it is unlikely he will return to London this year, a distinct improvement has been noticeable in Mr. Chamberlain's condition since his arrival in Birmingham on Monday week.