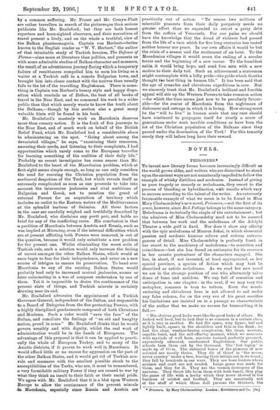 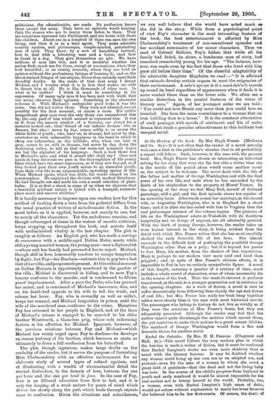 To invent new literary forms becomes increasingly difficult as the

favourable example of what we mean is to be found in Miss Mary Cholmondeley's new novel, Prisoners,—not the first of its genre, however, since Red Pottage belongs to the same category. Melodrama is technically the staple of the entertainment ; but the admirers of Miss Cholmondeley need not to be assured

that between her work and the melodrama of the Adelphi Theatre a wide gulf is fixed. Nor does it show any affinity with the epic melodrama of Maurus Jokai, in which elemental passion and sardonic humour relieve and redeem extrava- gances of detail. Miss Cholmondeley is perfectly frank in her resort to the machinery of melodrama—to sensation and coincidence—but she has found an antiseptic for its excesses in her caustic portraiture of the characters engaged. She has, in short, if not invented, at least appropriated as her special province, a species of fiction which may best be described as satiric melodrama. As we read her new novel we are in the strange position of one who alternately takes doses of bane and antidote. We sup full of sensation and anticipation in one chapter : in the next, if we may vary the metaphor, romance is torn to tatters. Even the much- enduring and chivalrous hero is not allowed to sail under any false colours, for on the very eve of his great sacrifice his limitations are insisted on in a passage so characteristic of the author that we make no excuse for transcribing it in full:—

" His obvious good looks were like the good looks of others. Ile looked well bred, but to look that is as common in a certain class, as it is rare in another. He had the spare, wiry figure, tall and lightly built, square in the shoulders and thin in the flank ; he had the clear, weather-beaten complexion, the clean, nervous, capable hand, and the self-effacing manner, which we associate with myriads of well born, machine trained, perfectly groomed, expensively educated, uneducated Englishmen. Our public schools turn them out by the thousand. The lost legion' is made up of them. The unburied bones of the pioneers of new colonies are mostly theirs. They die of thirst in ' the never, never country' under a tree, leaving their initials cut in its trunk; they fall by hundreds in our wars. They are born leaders where acumen and craft are not needed. Large game was made for them, and they for it. They are the vermin destroyers of the universe. They throw life from them with both hands, they play the game of life with a levity which they never showed in the business of cricket and football. They are essentially not of the stuff of which those dull persons the thinkers, the

politicians, the educationists, are made. No profession knows them except the army. They have no opinions worth hearing. Only the women who are to marry them listen to them. They are sometimes squeezed into Parliament, and are borne with there like children. About one in a hundred of them can earn his own living, and then it is as a land agent. They make adorable country squires, and picturesque, simple-minded, painstaking men of rank. They know, by a sort of hereditary instinct, how to deal with a labouring man and a horse, and how to break in a dog. They give themselves no airs. We have millions of men like this, and it is doubtful whether the nation finds much use for them, except at coronations, when they look beautiful ; or on county councils, where they can hold an opinion without the preliminary fatigue of forming it ; and on the blood-stained fringes of our empire, where they serenely meet their dreadful deaths. In the ranks of that vast army I descry Michael, and I wonder what it is in him that makes me able to descry him at all. He is like thousands of other men. In what is he unlike ? I think it must be something in his expression. Of many ugly men it has been said with truth that one never observes their ugliness. Something in the character redeems it. With Michael's undeniable good looks it was the same. One did not notice them. They were not admired, except possibly for the first moment, or across a room. His rather insignificant grey eyes were the only thing one remembered him by, the only part of him which seemed to represent him. It was as if, from the narrow window of a fortress, our friend for a moment looked out; that 'friend of our infinite dreams' who in dreams, but alas ! never by day, comes softly to us across the white fields of youth ; who, later on, in dreams, but never by day, overtakes us with unbearable happiness in his hand in which to steep our exhaustion on the hillside ; who, when our hair is grey, comes to us, still in dreams, but never by day, down the darkening valley, to tell us that our worn-out romantic hopes are but the alphabet of his language. Such a look there was in Michael's eyes, and what it meant who shall say ? Once and again at long intervals we pass in the thoroughfare of life young faces which have the same expression, as if they saw beyond, as if they looked past their own youth across to an immortal youth, from their own life to an unquenchable, upwelling spring of life. When Michael spoke, which was little, his words verged on the commonplace. He explained the obvious with modest directness. He had thought out and made his own a small selection of plati- tudes. It is at first a shock to some of us when we discover that a beautiful spiritual nature is linked with a tranquil, common- place mind, and narrow abilities."

It is hardly necessary to impress upon our readers how far this method of hauling down a hero from his pedestal differs from the usual practice of writers of melodramatic fiction. In the novel before us it is applied, however, not merely to one, but to nearly all the characters. Yet the melodrama remains, and though submerged at times in the waters of caustic criticism, keeps cropping up throughout the book, and asserts itself with undiminished vitality in the last chapter. The plot is roughly as follows. An English girl, who has made a manage de convenance with a middle-aged Italian Duke, meets, while still a young married woman, the young man—now a diplomatist —whose suit her family had persuaded her to reject. Michael, though still in love, honourably resolves to escape temptation by flight; but Fay—the Duchess—entreats him to pay her a last visit at her villa, and proposes elopement. At this critical moment an Italian Marquis is opportunely murdered in the garden of the villa; Michael is discovered in hiding, and to save Fay's honour confesses to the murder, and is condemned to fifteen years' imprisonment. After a year the Duke, who has guessed her secret, and is convinced of Michael's innocence, dies, and on his death-bed appeals to his wife to tell the truth, and release her lover. Fay, who is cowardly as well as selfish, keeps her counsel, and Michael languishes in prison until the wife of the murdered man confesses to the crime. Meantime Fay has returned to her people in England, and at the time of Michael's release is engaged to be married to his elder brother Wentworth, a blameless prig, whose sole redeeming feature is his affection for Michael. Ignorant, however, of the previous relations between Fay and Michael—which Michael has vainly urged upon Fay to disclose—he develops an insane jealousy of his brother, which becomes so acute as ultimately to force a full confession from his betrothed.

The plot, though ingenious, makes large drafts on the credulity of the reader, but it serves the purpose of furnishing Miss Cholmondeley with an effective environment for an elaborate study of several types of refined egotism, and of illustrating with a wealth of circumstantial detail the eternal distinction, in the domain of love, between the one qui baise and the one qui tend la joue. In the case of Fay, love is an illiberal education from first to last, and it is only the longing of a weak nature for peace of mind which drives her slowly along the path which leads through repent- ance to confession. Given the situations and coincidences, we can well believe that she would have acted much as she did in the story. While from a psychological point of view Fay's character is the most interesting feature of the book, the best entertainment is afforded by Miss Cholmondeley's treatment of non-sensational episodes and her mordant summaries of her minor characters. Thus we read of Colonel Bellaire, Fay's father, that while all hia family had faded, he alone, a handsome man of sixty, had remained remarkably young for his age. "The balance, how- ever, was made even by the fact that those who lived with him grew old before their time." Of the cheerful adaptability of his admirable daughter Magdalen we read:—" It is affirmed that animals develop certain organs to meet the exigencies of their environment. A sole's eye (or is it a sand-dab's P) travels up round its head regardless of appearances when it finds it in more wanted there than on the lower side. We often see a similar distortion in the mental features of the wives of literary men." Again, of her youngest sister we are told : "You could not love Bessie any more than you could love an ironclad. She bore the same resemblance to a woman that an iron building does to a house." It is the constant alternation of such passages with moods of sentiment and fits of melo- drama that lends a peculiar attractiveness to this brilliant but unequal novel.