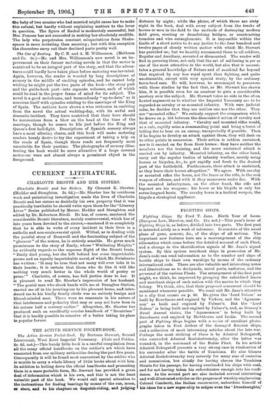 Williamson. (Methuen and Co. 6s.)—Mr. and Mrs. Williamson's new novel is an im- provement on their former motoring novels in that the motor is contrived to be an integral part of the story, and that the adven- tures could hardly have taken place before motoring was invented. Again, however, the reader is worried by long descriptions of scenery in the middle of exciting episodes, and he cannot help wishing he might put the two parts of the book—the story part and the guide-book part—into separate volumes, each of which could be read in the proper frame of mind for its subject. The novel is a good melodrama, and tremendously "up-to-date," as it concerns itself with episodes relating to the marriage of the King of Spain. The authors have shown a wise reticence in omitting from the novel the actual wedding-day, with its awful and dramatic incident. They have contrived that their hero should be unconscious from a blow on the head at the time of the marriage, though he comes to life just before the King and Queen's first bull-fight. Descriptions of Spanish scenery always have a most alluring charm, and this book will make motoring readers keenly desire to try the experiment of taking a trip on the roads of Spain, though those roads are frequently moat unsuitable for their pastime. The photographs of scenery illus- trating the book would be more attractive if a large covered motor-car were not almost always a prominent object in the foreground.