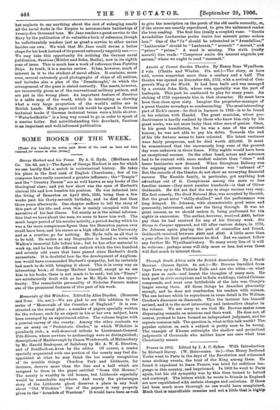 [Muter this heading we notice such Books of the week as hese not been reserved for review in other forms.] George Herbert and his Times. By A. G. Hyde. (Methuen and Co. 10s. 6d. net.)—The figure of George Herbert is one for which we can hardly find a match in ecclesiastical history. He takes his place in the first rank of English Churchmen ; few of his compeers have really exercised a greater influence ; the "Temple" and the "Country Parson" are as well known as any books of the theological class ; and yet how short was the span of Herbert's clerical life and hew humble his position. He was inducted into the living of Bemerton on April 26th, 1630, being then a few weeks past his thirty-seventh birthday, and he died less than three years afterwards. One chapter suffices to tell the story of this part of his life, and even this is mainly occupied with the narrative of his last illness. Yet scanty as is the actual informa- tion that we have about the man, we seem to know him well. The much larger period of his secular activity, a period during which he was a far more conspicuous figure than the Bemerton parson ever could have been, and his career as a high official of the University and as a courtier, go for nothing. Mr. Hyde tells us all that is to be told. He writes as any biographer is bound to write with Walton's immortal Life before him ; but he has other material to work up, and he has the different outlook which the two hundred and seventy odd years that have passed since Herbert's death necessitate. It is doubtful how far the development of Anglican- ism would have commanded Herbert's sympathy, but he certainly had much to do with bringing it about. This is in every way an interesting book ; of George Herbert himself, except as we see him in his books, there is not much to be said ; but his "Times" are satisfactorily dealt with as far as Mr. Hyde has the oppor- tunity. The remarkable personality of Nicholas Ferrers makes one of the prominent features of this part of his work.